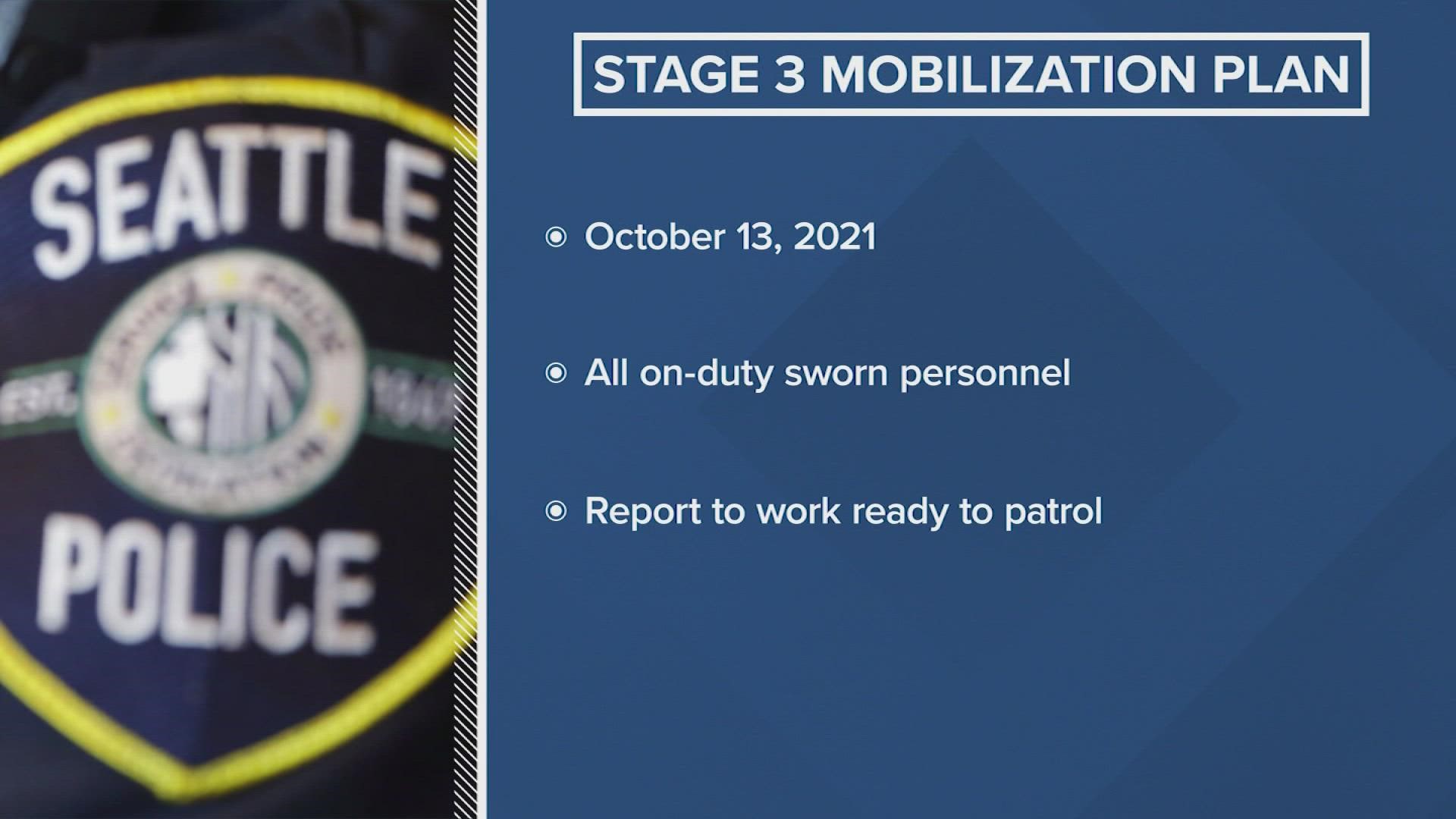 An emergency stage three mobilization plan is now in effect for SPD. People who call 911 could be met by any on-duty sworn employee. That includes detectives, education and training employees and people with patrol backgrounds.

The department said the limitations of such employees should be taken into consideration.

Seattle's COVID-19 vaccine deadline is Oct. 18, which is in line with the state's mandate. As of Tuesday, data from SPD shows 84% of officers have submitted their vaccine information.

Less than 100 have filed for an exemption, but 214 still have not done either, which is why the stage 3 plan is in place.

On Oct. 1, SPD Chief Adrian Diaz sent a letter to staff urging officers to get vaccinated and turn in their vaccine verification to avoid a "disruption to unit of assignments."

The Seattle Police Officers Guild (SPOG) is among the few unions that have yet to reach an agreement with the city over the vaccine mandate.

There are 1,084 active SFD employees, including uniformed members and civilians. As of Oct. 13, 95% of active members have submitted either a vaccine verification or exemption form. Of those, 88% are confirmed to be fully vaccinated, according to the department.

The department says it fully expects to see some departures of personnel as a result of the mandate and are considering various options for how to adjust its response model through the transition.

For now, SFD is making the following changes based on its Continuity of Operations Plan:

Meanwhile, with an SPD staffing crisis potentially becoming much worse, downtown businesses are calling on city council and the police to curb what they call "rampant" crime.

The Downtown Seattle Association said Tuesday that more than 150 Seattleites have signed a letter urging the city to adopt parts of Mayor Jenny Durkan's 2022 budget proposal that call for increased investments in police, community safety officers and housing.

Plus, the city is experiencing a surge in gun violence, along with the rest of the country, that's seen 438 shootings in 2021 as of Sept. 30. In all of 2020, there were a total of 443 shooting incidents city-wide, which was up significantly from 2019 when the city had 332 shooting incidents.