Police chief condemns protest violence: ‘This is not how Seattle creates change’

Seattle's business community hopes the new police chief sticks to his word that the damage from protests won't be tolerated. 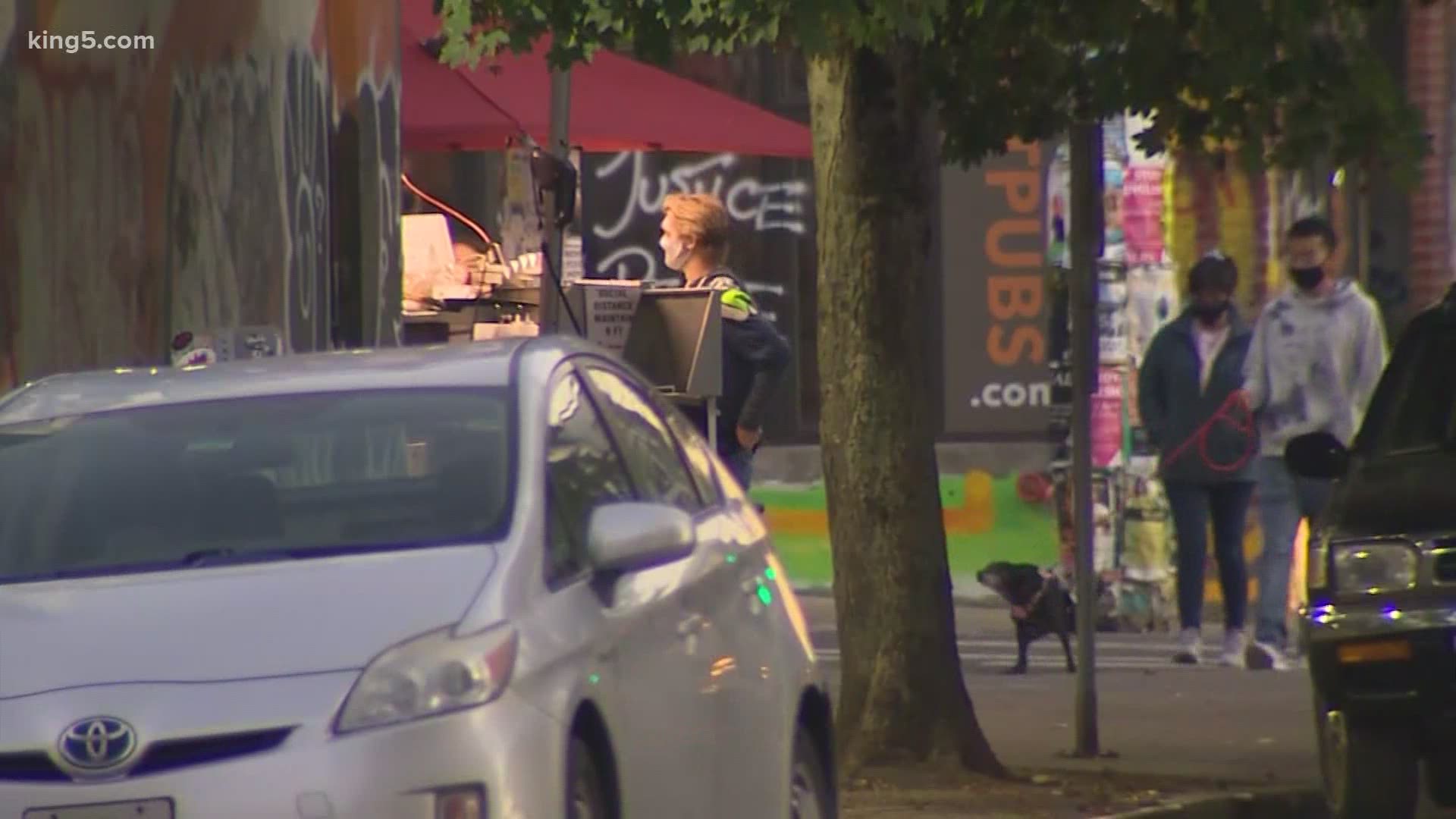 SEATTLE — Seattle Interim Police Chief Adrian Diaz condemned the recent violence in the city and called for an end to property damage and assaults on police officers.

During a Sunday news conference, Diaz called for an end to the violence after a string of destructive protests in the city that included property damage to businesses and city hall, fires lit in the middle of streets and officers being assaulted by protesters throwing rocks, water bottles and explosives.

The Seattle Police Department (SPD) said it has made over two dozen arrests as people continue to take to the streets protesting and demanding justice for Breonna Taylor, a Black woman shot and killed in her home by police in Louisville, Kentucky.

Diaz said he supports first amendment freedoms and lawful demonstrations calling for an end to injustices but said the calls for change are “being drowned out by relentless violence, mayhem and illegal behavior."

“Recent events are not exercising first amendment freedoms,” said Diaz. “They are lawlessness for an apparent singular goal for destruction.”

Last week, a protester hit an SPD officer in the head with a baseball bat during a demonstration in Capitol Hill. Diaz said he has little doubt that if the officer hadn’t been wearing a helmet when they were hit, the officer would have sustained a “critical or deadly injury.”

“This is not how Seattle creates change,” said Diaz. “We cannot, and do not, accept putting lives of our community at risk with criminal and reckless behavior. The violence has to stop, and we need every member of this community to demand this end as well.” 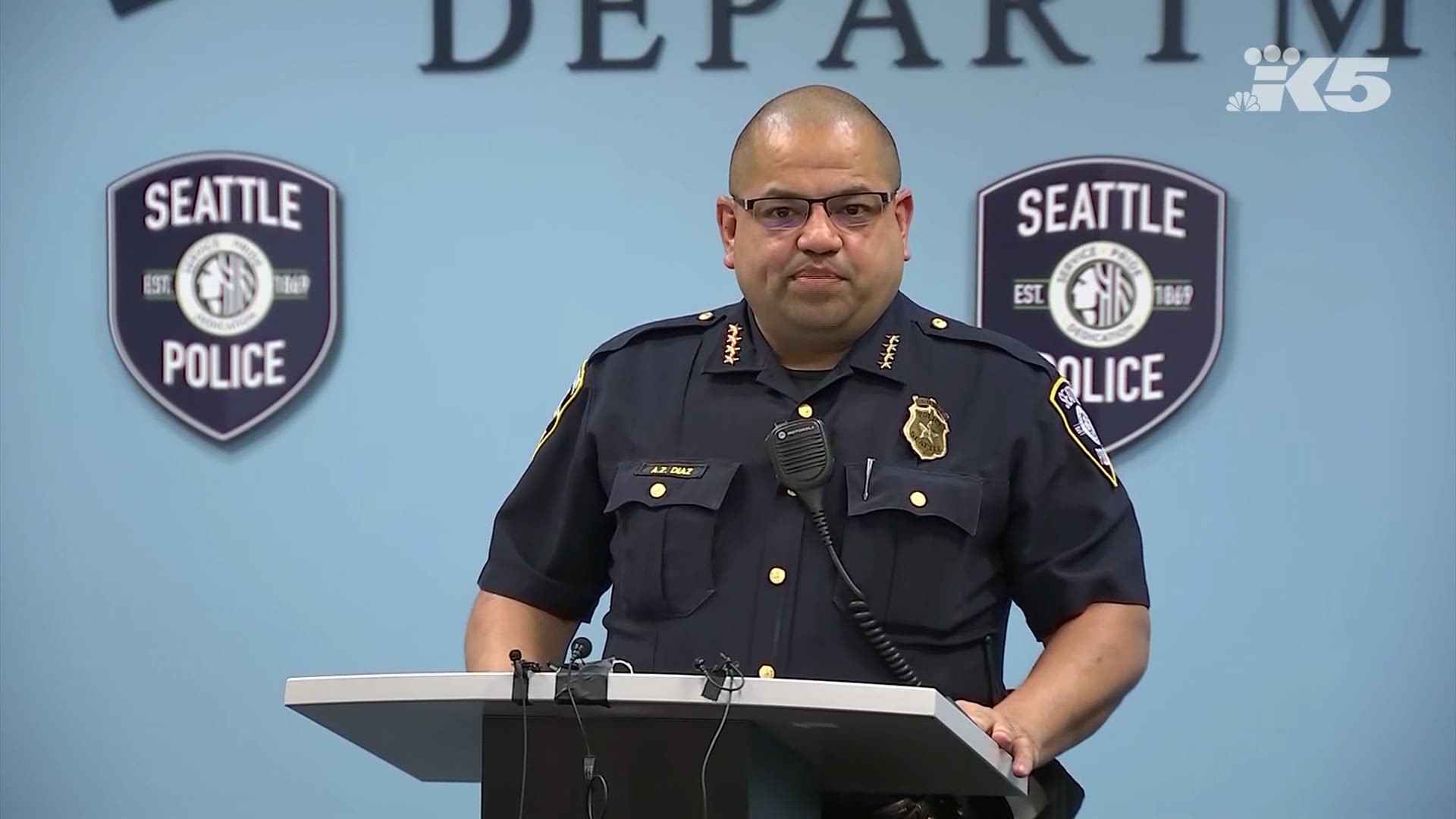 Diaz also addressed reports of violence from officers during protests. Last week, an SPD officer was placed on leave after the officer was seen on video rolling his bike over a person lying in the street during a protest in Capitol Hill.

“I know some will state the [violent behavior against officers] is justified because of the actions of some of the police officers,” said Diaz. “What I know is that here in Seattle, our robust accountability system will investigate any and every complaint against officers, and I will hold those accountable when the evidence shows it is deserved.”

The SPD said after it was made aware of the incident, it immediately activated the Force Investigation Team (FIT) to document and investigate the use of force. FIT notified the Seattle Office of Police Accountability (OPA), which received over 30 complaints concerning the incident. The agency requested a criminal investigation be conducted.

While Diaz took a stand, so did Seattle’s business community.

Todd Biesold, CFO of Merlino Foods in Seattle’s SODO neighborhood, is one of 550 concerned members of Seattle's business community who signed a pledge asking for Seattle City Council to acknowledge the community’s safety concerns before voting to overrule the Mayor Jenny Durkan's veto on defunding SPD.

“I just I don't understand what the benefit is of letting these guys just bust the hell out of everything every night,” said Biesold.

Biesold feels the city, especially the city council, is not listening.

“It’s sad and dismayed that, that they’re, they can’t see the water for the trees,” he said.

But with Seattle City Council paving the way for up to 100 fewer officers and no Navigation Team to monitor homeless camps and direct those in the camps to resources, Biesold said if SPD can't get a handle on crime, the trend of boarded up buildings and businesses skipping out of town will only continue.

As much as small businesses don't want to be defined by the destruction around them, Diaz doesn't want the city to be either.

“We cannot do this work by creating a new model for community safety while fires burn in our streets, windows are breaking, officers are injured every night and community members are placed at risk,” said Diaz. “This is not what Seattle is all about, and this is not who we want to be.”