Officer Todd Wiebke is responding to community concerns by reaching out online, and he's giving the public a unique perspective. 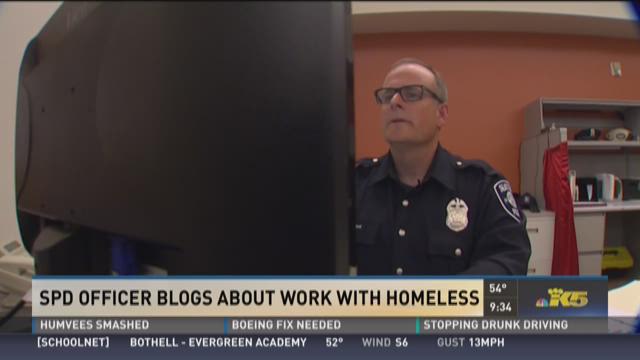 SEATTLE -- Police officers aren't usually allowed to make public statements unless approved by the department. That's why the actions of one officer in West Seattle has been getting some attention.

Officer Todd Wiebke is responding to community concerns by reaching out online, and he's giving the public a unique perspective.

We met up with Wiebke patrolling the perimeter of the Southwest precinct, scoping out some RV's parked along Meyers way.

As a community police officer, Wiebke tries to balance compassion with the public safety, explaining to one man in an RV that neighbors are concerned about their presence.

Walking this beat is walking a fine line. When it comes to communicating with and about the homeless, everyone has an opinion.

"Sometimes, I sit down, and I just go, but I have to tell everyone what happened," Wiebke said.

That's why Wiebke blogs about his day on the job on Nextdoor.com, a neighborhood social media site, telling people about a busy week of arrests, or his frustrations with cleaning up after a homeless encampment.

"I was not happy with the level of destruction left behind" reads one entry.

Yet, he balances it with heart.

"Cleaning camps occupied by nice people who don't fit in," reads another.

"And then I started realizing the comments, and they were like 'Holy Cow. The police department is really doing this.' And we have been doing this, and it's not new, but I think it's the first time we've told anybody."

Wiebke is quick to credit all the other agencies who help with the homeless problem in West Seattle.

His blogs are getting warm reviews, if not for his actions at least for the updates. The colorful quotes, the unique perspective, from a voice that is seldom heard online -- the voice of a police officer talking about his day.

"When you start writing it flows, and it kind of hits you, and I'm having a lot of fun with it.