González and Harrell are vying for the open seat vacated by Seattle Mayor Jenny Durkan, who chose not to run for re-election. 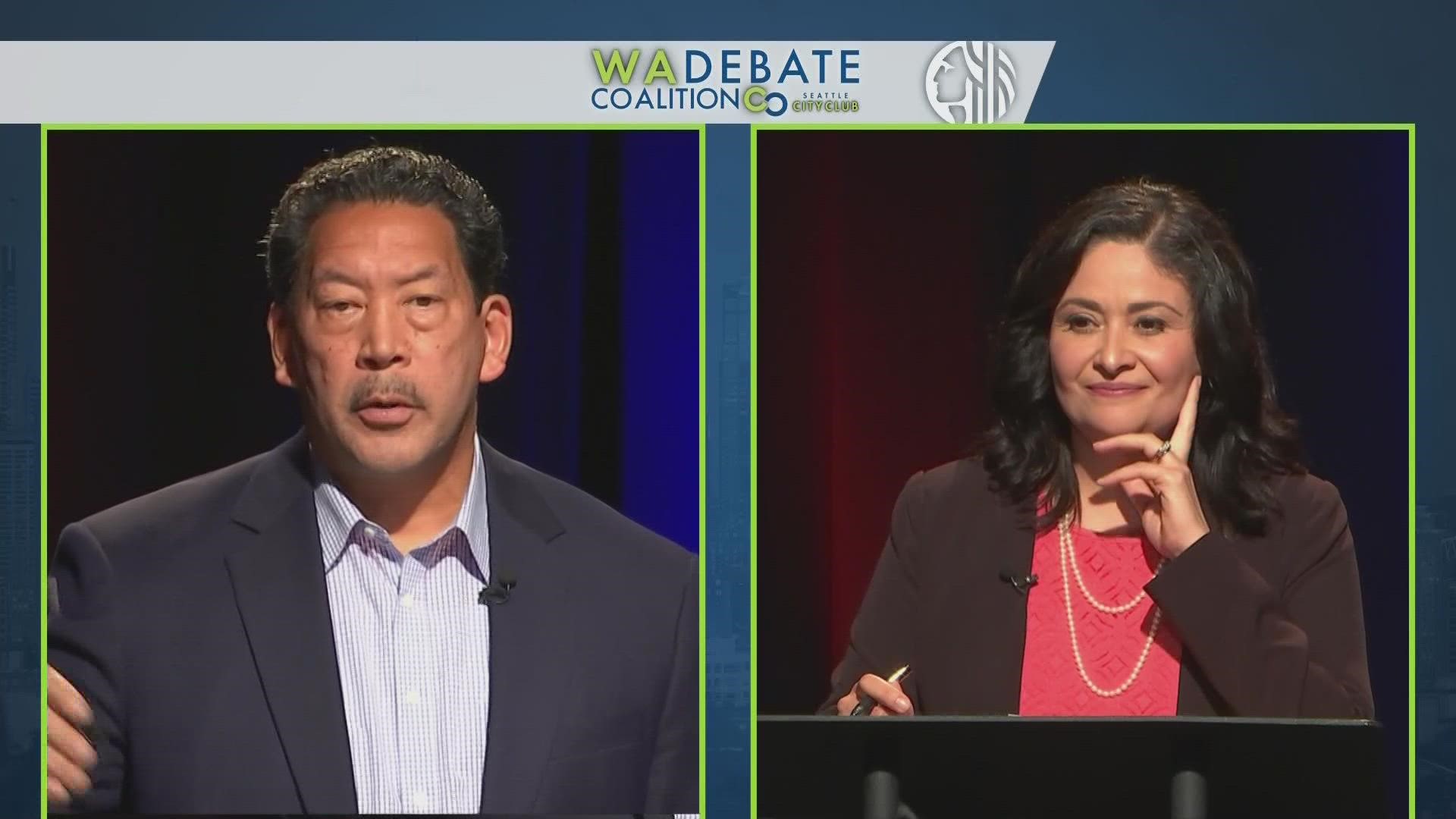 SEATTLE — Seattle mayoral candidates Lorena González and Bruce Harrell faced off Thursday night in the first of two debates on KONG-TV this month.

González and Harrell are vying for the open seat vacated by Seattle Mayor Jenny Durkan, who chose not to run for re-election.

Formerly a civil rights attorney, González is the current Seattle City Council president and holds a citywide seat. She was elected as the council’s first Latinx member in 2015.

If elected mayor, she would not only become the third woman to do so, but she would also become the first Latinx mayor in the city of Seattle.

Harrell has served three terms on Seattle City Council, including as president for three years at the end of his time on the council. He also briefly served as mayor when Ed Murray resigned in 2017. At the time, Harrell, who represented District 2 in South Seattle, decided not to run for re-election.

During Thursday's debate, the candidates faced questions about business and the economy and their plans for Seattle.

Below are the candidates' responses to some of the questions asked:

Moderator question: As mayor, what will be your number one priority?

Lorena González answer: I think it’s pretty clear that the next mayor’s biggest opportunity and challenge to lead is on solving for homelessness. Like so many people in our city, I believe that people living in our open spaces in tents is unacceptable. I do not believe that people should be living outside. We need to work clearly and urgently to rapidly increase shelter and to make sure we are still looking at how we can build more affordable housing throughout our city. And increasing access to mental health care and substance use disorder treatment throughout the city. This is the number one challenge for this city and I am looking forward to being able to work on those issues together with our broad community to create rapid and meaningful progress in the first 100 days of my administration.

Bruce Harrell answer: Same issue. Homelessness. I think, we understand that, our approach will be differently, however. I have a sense of urgency. The first thing we will do is publish a plan – you’ll see cost per person, cost per unit, you’ll see a dashboard of where we are right now, which is totally unacceptable. A sense of urgency and when I talk about moving people out of parks, out of sidewalks, out of playgrounds where you see syringes and these intolerable conditions, I am talking about building and treating our way out of this issue with the same sense of urgency. Under the Harrell administration, you have no excuse making. We will never reach a time where we’ll say we have all of the taxes, all of the revenue to solve the problem. What we will do under my approach is we will exhaust every possible tax we could from looking at our regressive tax structure and making sure we increase and use and change a more progressive tax structure. Yes, there’s no disagreement there, but we also have these very wealthy corporations. If we get into the economics of this city, we are a wealthy city, so we are also going to tap into the resources around us and make sure all hands are on deck under the Harrell approach.

Each candidate also answered questions about Seattle's largest employer - Amazon - and the tech company's impact on the city.

Moderator question: Given the 'sky is falling' discussion about Amazon and their relationship with city hall, they just announced they’re going to hire thousands more people in Seattle, and given that, what should the company do to alleviate some of the concerns that are shared as it relates to housing and infrastructure?

Bruce Harrell answer: Well, number one, they have to pay their fair share of taxes. Number two, they have to align their corporate social responsibility goals with that of the city. That would be affordable housing, that would be homelessness, that will even be some of the health care initiatives that we will role out as mayor. But let’s make no mistake about that – if you look at our gross domestic product in this region, we are doing quite well but not everyone’s enjoying in that success. The market value of Amazon is about $1.56 trillion, lower than Microsoft’s actually… When you look at the wealth that these corporations have they have to not only pay their fair share of taxes, they have to be in line with the issues, and some of the issues that they’ve caused. So my platform has to do a lot with not only holding them accountable but looking at these vast resources around us. Some of these companies, for example, their corporate social responsibility are race, data and inclusive efforts for their employees and so we’re going to align their efforts with the important issues here in the city of Seattle.

Moderator question: Do you think it would be a good thing or a bad thing, ultimately because of the relationship with city hall, if Amazon decides to move more employees outside of Seattle?

Lorena González answer: I don’t think Amazon is going to look at moving anywhere else but here in Seattle. We just saw that they announced that there’s going to be 12,500 new jobs right here in this city of Seattle. Why? Because we’re a beautiful city. Their workers and their future workers want to live and work in this city. So it is critically important for us to make sure that we have a mayor who is serious about requiring all large, profitable corporations pay their fair share. So let’s be real about this – I’m the only candidate on this stage who means it. I am supported by working class families because they know I am serious about bringing to bare the reality of corporations paying their fair share.

Moderator follow-up question: But again – I want to ask you the question, is it a good thing or bad thing if Amazon were to move employees to Bellevue, where they’ve been welcoming them, or to Everett or Pierce County?

Lorena González answer: We want our employers to remain in this city, particularly if they are high road employers, so I am willing to work with any employer who is willing to do the right thing by their employees, by making sure they can unionize, by making sure they have access to health care, to child care, and to transit opportunities that aren’t congesting our streets and who are going to pay their fair share to help us build the amenities that make Seattle a great and vibrant city.

Watch the entire debate on the KING 5 YouTube Channel or below:

The second debate, hosted by the Seattle City Club, airs Oct. 28 at 7 p.m. on KONG. It will also be livestreamed on king5.com, the KING 5 mobile app and the KING 5 YouTube channel.