Police called a demonstration on Capitol Hill a riot after “rocks, bottles and fireworks” were thrown at officers. 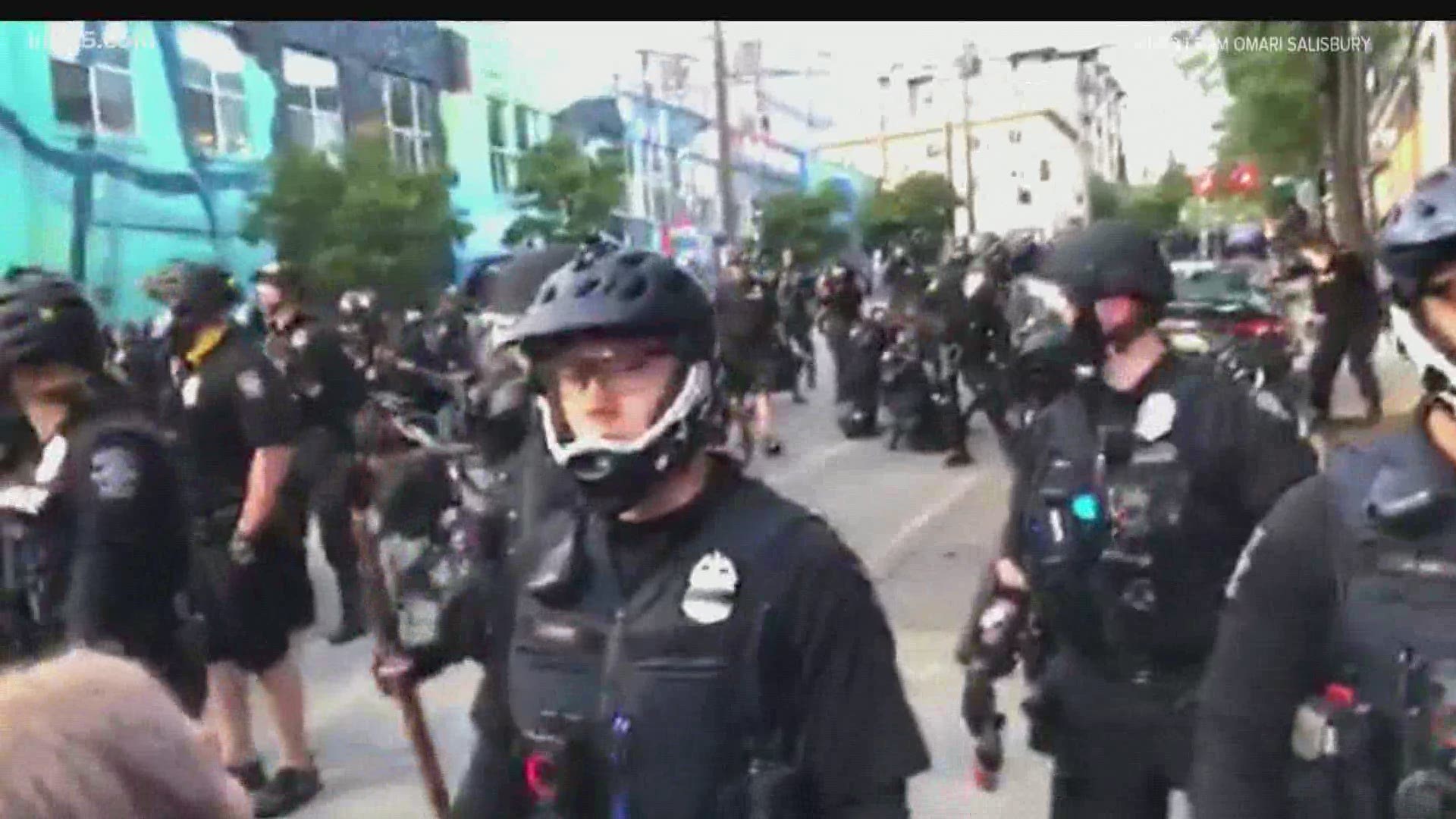 SEATTLE — In response to protests over the death of George Floyd, who died in Minneapolis police custody, cities around Puget Sound braced for another round of demonstrations Monday.

Seattle police called a demonstration on Capitol Hill Monday night a riot. Police said a “crowd threw rocks, bottles, and fireworks at officers and attempted to breach barricades one block from the East Precinct.”

Police said people in the crowd threw the items at officers and attempted to break through a fence line at 11th Avenue and Pine Street. According to a Seattle Police Blotter post, the Incident Commander declared the demonstration a riot “response to the increasing number of assaults on officers and the increasing risk to public safety.” 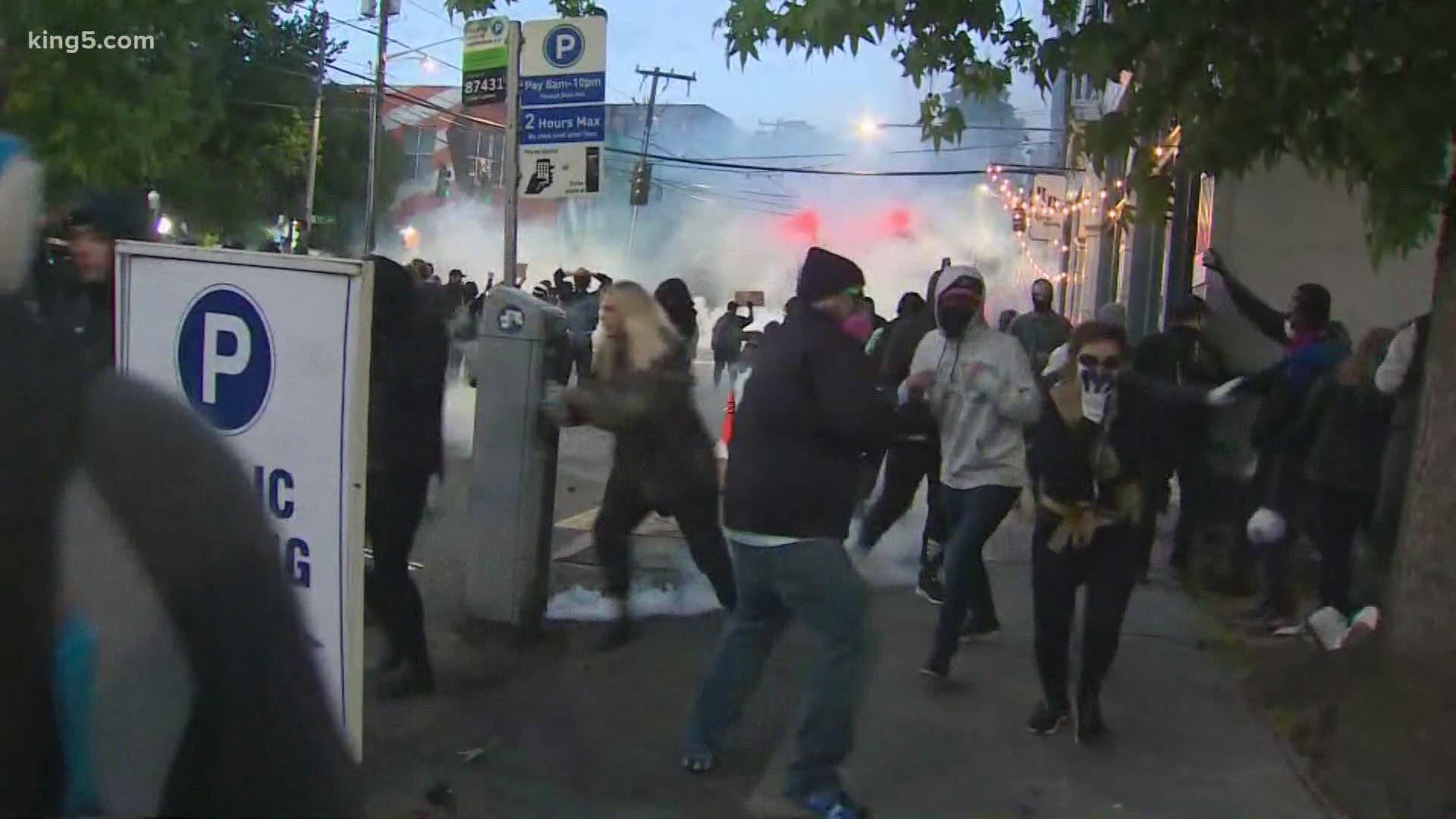 Things appeared to have calmed down around 10:15 p.m. and the streets were relatively quiet again.

Seattle police have called the demonstration in Capitol Hill a riot. The crowd apparently threw rocks, bottles, and fireworks at officers.

Protestors were attempting to breach the police barricades a block away from the East Precinct, according to SPD.

These protests initially started out as peaceful as thousands walked through the city.  However, a small group of people escalated the situation in Capitol Hill.

It's estimated that millions of dollars of damage was caused to the city over the span of a four-day protest.

Both directions of I-5 are closed again through downtown Seattle, according to Washington State Patrol Trooper Rick Johnson. He tweeted that protesters were in the vicinity of the freeway, so both directions have been shut down as a precaution.

Both directions of I-5 through downtown Seattle were briefly closed Monday evening due the possibility of protesters walking onto the freeway, but it has since reopened.

Seattle police are seeking photos or videos that could help detectives identify suspects who have caused injuries and damaged public and private property during the weekend protests.

If you have photos or videos of any criminal activity you would like to provide to detectives, please upload them here.

To submit videos and photos related to any concerns regarding officer conduct at demonstrations, please visit the Office of Police Accountability website.

The City of Renton and Renton Farmers Market organizers have postponed Tuesday’s opening day in an overabundance of caution in response to the protests.

The 19th annual market was set to open at 3 p.m. on June 2. Instead, opening day will now be Tuesday, June 9 at 3 p.m. The market is scheduled each Tuesday from 3 to 7 p.m. at Gateway Park in downtown Renton through September 29

Protesters coming out in the name of George Floyd have been peaceful, but police departments have said that a group of people hid behind those protests to loot and cause damage.

Here's what some cities around the area did to prepare for Monday's demonstrations:

While groups of protesters in Seattle turned violent on Saturday, demonstrators on Sunday remained mostly peaceful.

However, areas across Puget Sound are still preparing for large gatherings and protests on Monday.

In response to that, another curfew has been put in place.

Durkan announced that this curfew would be in effect on Monday from 6 p.m. to 5 a.m. Tuesday.

The curfew was put in place to help clear people off the roads and allow first responders to get through to emergencies.

On Saturday, hundreds of buildings and businesses were damaged on Saturday, including more than 90 in the Chinatown-International District, according to Seattle police. At least eight cars were burned, and six officers were injured in addition to injuries among community members. Fifty-seven people were arrested, mostly for burglary and assault.

The destruction prompted Seattle to institute a curfew on Saturday and Sunday nights from 5 p.m. to 5 am.

Demonstrators gathered again Sunday afternoon and marched peacefully until after 10 p.m. when Seattle police ordered the crowd to disperse. A police line pushed the crowd away from Westlake Park in downtown Seattle to Capitol Hill before protesters started dissipating.

Mayor Durkan urges anyone who believes they have witnessed an instance of police brutality or excessive force to contact the Office of Police Accountability. Durkan said some officers are already being investigated from the weekend.

“We will continue to allow people to protest peacefully, regardless of the content of their protest, but what we cannot tolerate is people acting criminally,” Durkan said. “Looting buildings, stealing property, causing damage, throwing molotovs, starting fires, and assaulting police. We believe we can come together and express our differences, express our First Amendment rights in a way that honors the death of Mr. Floyd.”

On Sunday, Bellevue became a hotspot for destructive activity when a large group of people began looting Bellevue Square. Tear gas and flashbangs were deployed.

As a result of this, Bellevue enacted a curfew from 5 p.m. Monday until 5 a.m. on Tuesday.

The Alderwood Mall is closed Monday as a precautionary measure.

Police will be stationed around the mall to prevent people from looting and causing property damage. Lynnwood police observed the happenings in Seattle and Bellevue and took action in advance.

There have been no reports of looting at Alderwood.

Lynnwood's curfew began at 5 p.m. Monday and expired at 5 a.m. on Tuesday.

Tukwila was another hot-spot area on Sunday. Looters threw rocks and projectiles at police officers.

Places like Best Buy, Target, and REI were hit by looters and tear gas was deployed.

Officers will be out "in full force" for a rally planned at Renton City Hall at 3 p.m.

Renton PD said their presence is to deter those with "destructive intent" and we will maintain this additional staffing as long as necessary.

A curfew was imposed again Monday for the city of Renton.

The FBI is also asking for assistance in making arrests for those who chose violence during the protests.

If you witness or have witnessed unlawful violent actions, we urge you to submit any information, photos, or videos that could be relevant to the case at fbi.gov/violence.You may also call 1-800-CALL-FBI (800-225-5324) to verbally report tips and/or information related to this investigation