Reckless Video survived three recessions and a devastating structure fire, but the pressures of the pandemic proved too much for the family business to withstand. 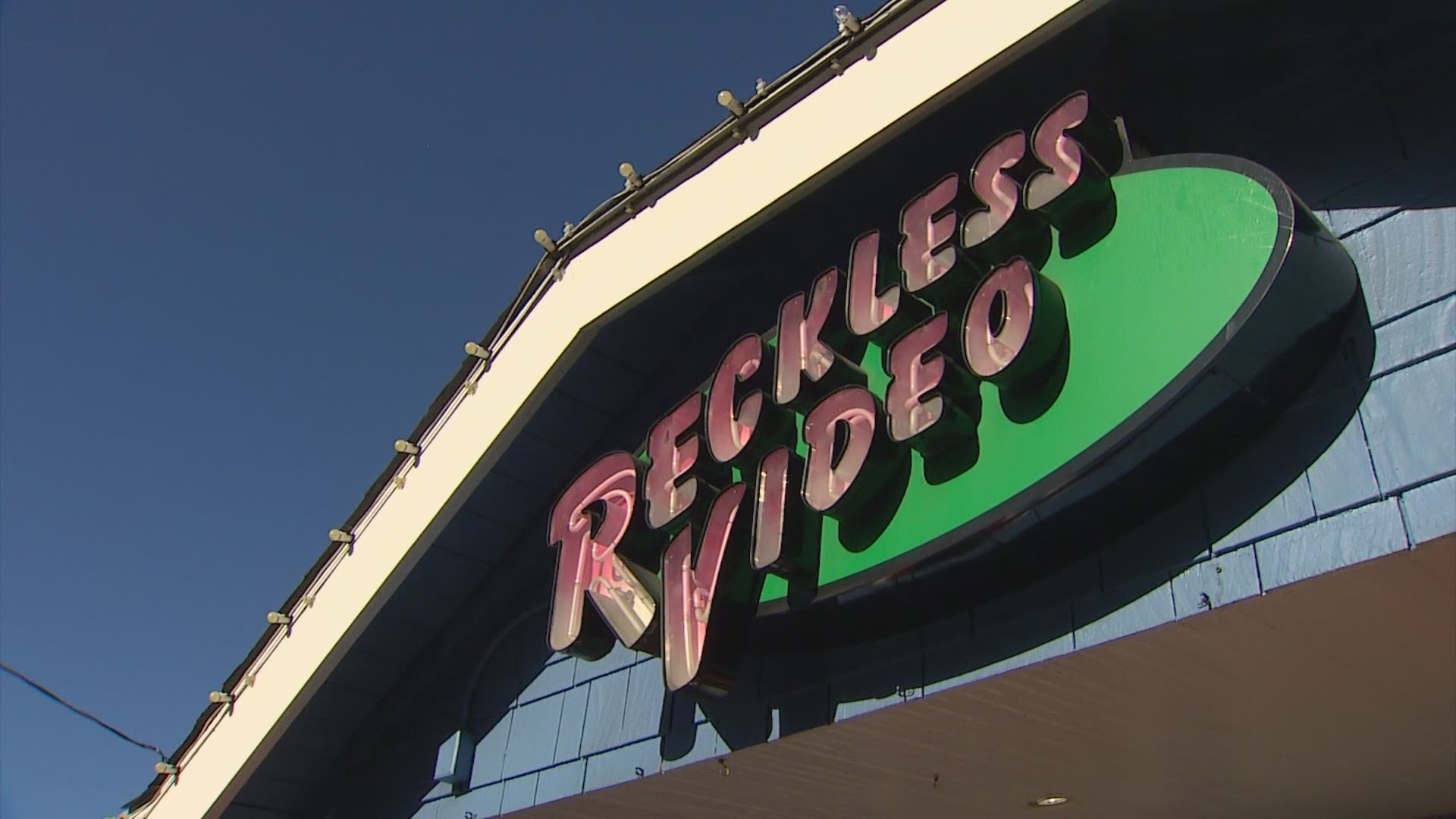 SEATTLE — By today’s standards, it was a much slower, simpler time. It’s a bygone era that really wasn’t all that long ago – the age of the neighborhood video store.

“You walk in the door and it’s like walking in a candy store,” said Billy Thompson.

The 1980s gave us the VCR and Golden Age of Video, which eventually gave way to the DVDs of the 1990s. The new age is one of nonstop streaming that has the Thompsons swimming against the current.

When it’s time for Friday family movie night with their two boys, they don’t sign in to Netflix, Hulu or Amazon. They go “back to the future” at Reckless Video.

“We basically kinda relive what we did as kids,” said Billy. “We get the popcorn and the Red Vines and do our thing.”

Mike Kelley opened Reckless Video in Seattle’s Maple Leaf neighborhood 30 years ago. The store survived three recessions and the owners even rebuilt after a 2001 fire that destroyed the original building.

Feeling somewhat fireproof, Reckless rolled on. For the longest time, Reckless’s biggest competitor was Blockbuster. Kelley outlasted that behemoth, but soon another monster emerged, threatening to devour everything in its path.

“Netflix definitely got our attention,” Kelley said. “We thought we could survive. It was when other people started talking about it, and it became part of their vernacular, that we started to get kind of worried.”

By 2019, Reckless was close to shutting down forever, but Kelley refused to shut the doors on the little blue house he loved.

When we set out to do this story it was supposed to be about how Reckless Video managed to survive for so long, in the face of such great odds. In the middle of production, however, Kelley came to us with a major plot twist.

Out of nowhere, he announced, “It’s time to close the business. Financially, it is no longer viable.”

Kelley told us this just before 5 o'clock on a sunny Friday afternoon. Business in the shop was brisk. A new customer had just signed up for a membership. A dad came inquiring about summer work for his kid.

But Kelley knew it was all too late.

“It’s tough,” he said. “Opening Reckless Video and working in the neighborhood has been much of my life.”

The mounting pressure of the pandemic closure was the last straw, Kelley said. He confided in us, he hasn't taken a paycheck from the business in five years. He told us he has been paying employees out of his own pocket.

In fact, Kelley admitted the only thing that’s been keeping Reckless Video open is the revenue from the hardware store he owns right next door.

“I didn’t want to make a rash decision, but this has been coming for a while,” he said. “It’s just time.”

Kelley recalled his first six weeks in business when he had no employees and ran the place 12 hours a day by himself.

“I’d take naps on the floor when I could to get some rest,” he chuckled.

The family business turned out to be a movie of Kelley’s life, following him through the ups and downs, the plot twists, and now the final scene of this film.

For Billy and Olivia Thompson, it’s the end of the last vestige of their childhoods.

And for their boys Leo, 7, and Bodhi, 4, the Friday family movie night will never be the same.

Mike Kelley released a statement thanking the community for its support over the past 30 years. Reckless Video’s last day will be July 31.

While Reckless was Seattle’s last family-owned video store, Scarecrow Video, in the city’s Ravenna neighborhood, transitioned to nonprofit status several years ago and is still operating.