Dozens of protesters gathered at the ICE office in downtown Seattle calling for the White House to reunite migrant families separated at the border. 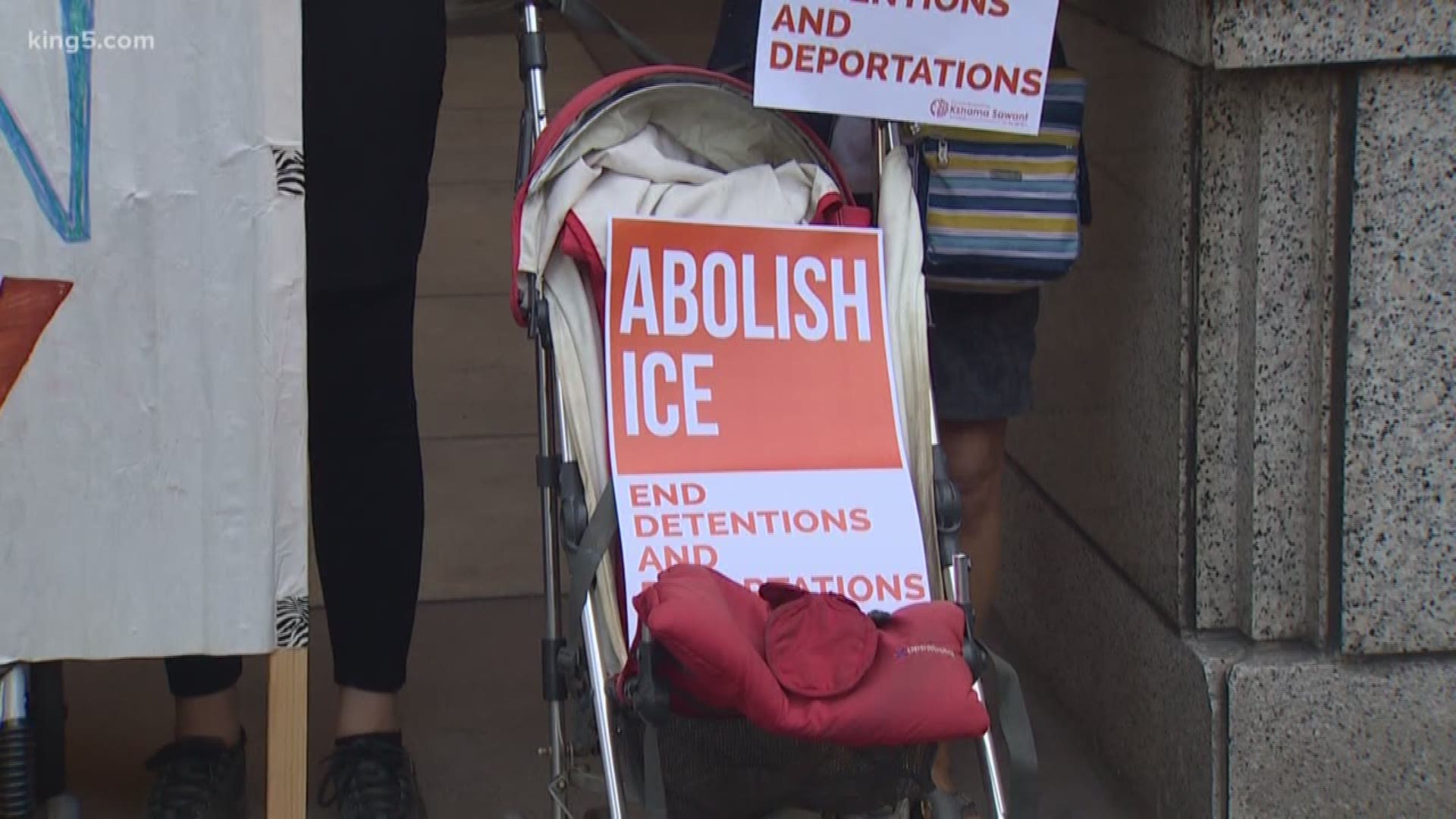 People at the protest could be seen holding signs that read, “Abolish ICE, end detentions and deportations;” “Kidnapping is bad. ICE staff resign,” and “Refugees welcome! Stop the war on immigrants.”

Protesters spent about three hours blocking an entrance to the building. They sat on the ground and locked arms, while some people stepped over them.

"I'm a mother of two children, and I'm sick at the idea of families being separated," said protester Krista Hanson. "Our country is made of immigrants. My grandparents were immigrants and they did not have to go through what people do today."

Seattle City Councilmember Kshama Sawant, one of the organizers of the event, said it is part of a series of protests across the country denouncing the separation of migrant families who were separated at the Mexican border.

"We will not be quiet and let daily life continue as normal when families are being ripped apart," said Seattle city council member Teresa Mosqueda. "We have to stand up and show solidarity with these families and reunite parents with their kiddos."

The rally started at 8 a.m. at the building that houses ICE offices, located at 1000 2nd Ave in Seattle. Representatives of the National Domestic Workers Alliance, Faith Action Network and Casa Latina also participated.

“We condemn this horrific treatment of migrant families and children by ICE," said Casa Latina Executive Director Marcos Martinez. "These teachers, caregivers, nannies, and parents who are standing up to ICE today are experts in caring for our children and who know what kind of trauma these separations will have on detained children. We will not be complicit in this unjust and harmful implementation of inhumane policy. We are willing to put ourselves at risk and take extreme measures in order for our message to be heard. We will not stand by in silence and allow this tragedy to continue.”

Most of the event was peaceful, though at one point a man inside the building forced open a door, pushing the protester seated against it. The crowd shouted "shame" at him until he went back inside.

KING 5's Michael Crowe was at the protest monitoring any possible traffic impacts.

All protestors are on the sidewalk right now so no impacts to traffic@KING5Seattle pic.twitter.com/2TCt598O2a

Nine people were arrested in June during a protest outside the Homeland Security Building. That group was “calling attention to the building’s role as Washington State’s deportation epicenter.”

Police were present at the rally Thursday but did not move in. The group left of its own accord around noon, calling the blockage a success. They chanted, "We'll be back" before dispersing.

ICE referred questions to the Federal Protective Service, but did send the following statement:

"U.S. Immigration and Customs Enforcement (ICE) fully respects the rights of all people to voice their opinion without interference. ICE remains committed to immigration enforcement consistent with federal law and agency policy."