The National Transportation Safety Board says the Ride the Ducks amphibious vehicle should have been recalled by the Missouri company that made it, as NTSB board raises serious questions involving duck tour operations. 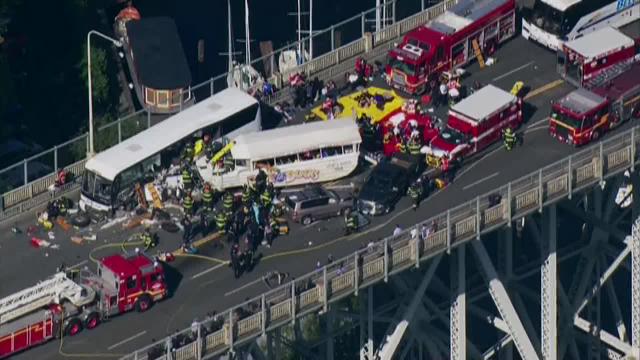 WASHINGTON, D.C. - The National Transportation Safety Board says the Ride the Ducks amphibious vehicle should have been recalled by the Missouri company that made it. The NTSB board raised serious questions involving the duck tour operations on Tuesday.

The NTSB heard from investigators about the September 24, 2015, collision between an amphibious duck boat and a tour bus. Five aboard the bus were killed, 69 others injured.

Ride the Ducks International -- the Missouri company that built the "stretch duck" involved in the accident -- took older WWII amphibious vehicles and installs new a drive train, engine, and other equipment to make the ducks. The company was not registered as a vehicle manufacturer with the National Highway Traffic Safety Administration. Because of that, the safety board says there was no federal safety oversight. NTSB investigators said they don't know the reasons why they may have thought the rules didn't apply to them.

The NTSB says metal fatigue led to cracking of the left steering knuckle that broke off just before the duck swerved left into oncoming traffic, causing the crash. Two reinforcements of the knuckles, one that existed on the accident vehicle and a second that was never installed, would not have prevented the axle failure, according to the NTSB.

Duck rides exist around the country, and the safety board was critical of a lack of seat belts and inconsistencies between the U.S. Coast Guard regulations that govern the vehicle when it's in the water and highway rules when operating on the roads. Visibility, or the lack of, for the driver was raised in a Boston case from April of 2016, where a duck operating on the street, overtook and hit a scooter, killing the scooter driver and injuring her passenger.

Watch the NTSB meeting via livestream. KING 5's Glenn Farley was also at the meeting. Follow his reports on Twitter at @GlennFarleyK5