Current Council President M. Lorena González is trailing Harrell with 31% of the vote. 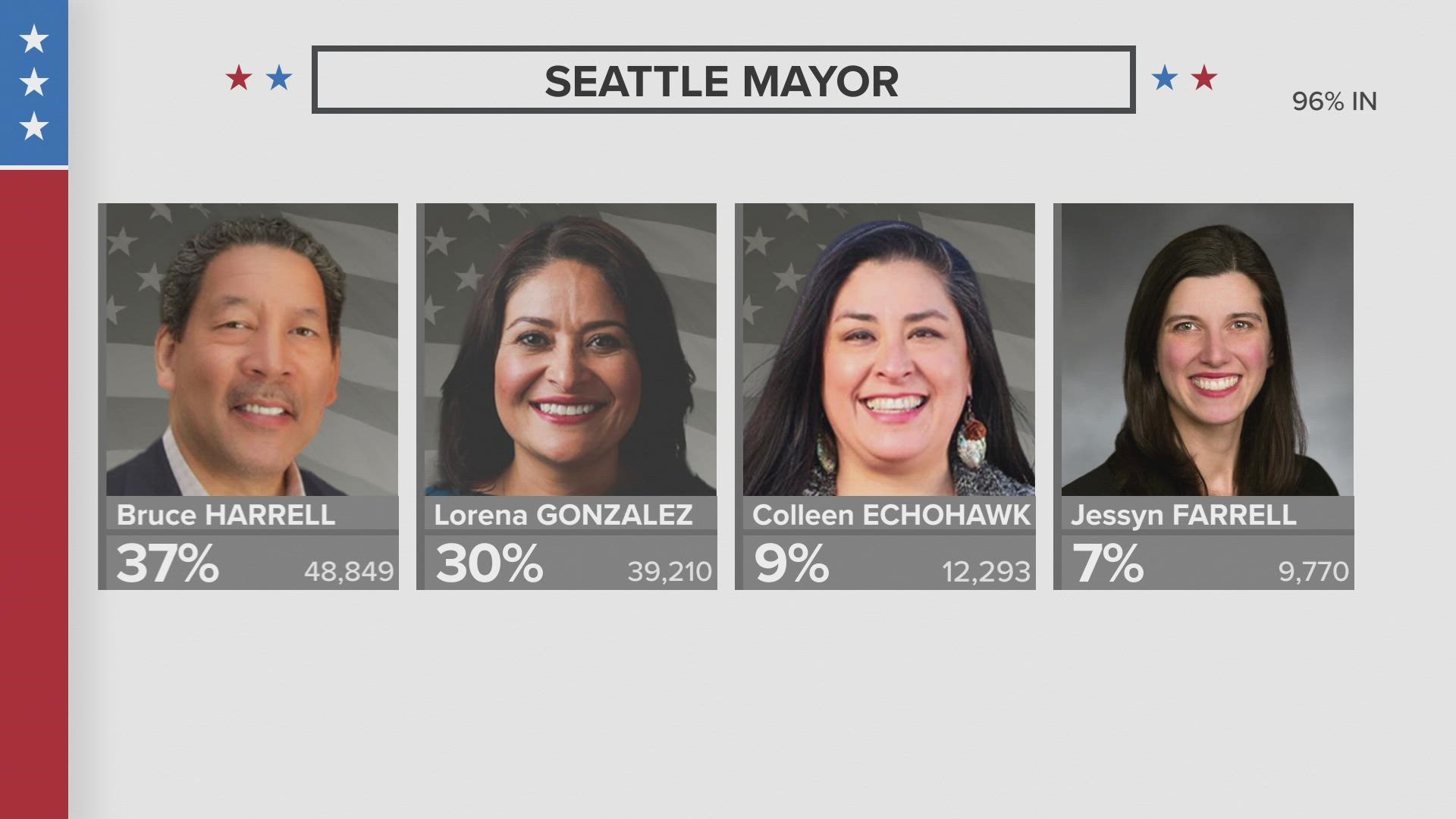 Harrell leads with 35% of the vote as of Friday afternoon.

M. Lorena González, who was elected to the city council in 2015 and began serving as council president in 2020, has 31% of the vote.

Colleen Echohawk and Jessyn Farrell are trailing the top two candidates, with 10% and 7% of the vote.

The top two candidates in the primary election move on to the general election in November.

“I really wanted to see just two candidates who were clearly being preferred by the voters, and we saw that in the Seattle mayor’s race – it’s going to be exciting, because it’s going to be an issue of what Seattle’s future is," said KING 5 Political Analyst Ron Sims. "Mayors have a tremendous amount of influence and what you want to know is where we’re going and how we’re going to get there, what will we look like and be compared with in terms of the rest of the country? Are people going to say, ‘wow, Seattle’s still an awesome place to live, does it have a political composition that drives success? Seattle has a lot to lose and a lot to gain, and I think with these two candidates, Seattle’s going to be very comfortable. It’s going to be the ‘magic city’ as we always wanted it to be.”

Formerly a civil rights attorney, González has a history in public service work, starting off her political career as the first Latinx ever elected to Seattle’s City Council in 2015. And in 2020, she stepped up and became the City’s Council President.

If elected mayor, she would not only become the third woman to do so, but she would also become the first Latinx mayor in the city of Seattle.

González had a campaign that included a variety of issues, including solving homelessness, creating economic recovery and addressing police accountability and public safety.

As for Harrell, he entered the election fresh off three terms as a Seattle City Council member. And before passing the baton to González, he also served as the council president from 2008 — 2019.

Harrell also has brief mayoral experience, stepping in after Ed Murray’s resignation in 2017.

Among many broad platforms, Harrell showed concern in helping  “small and minority owned business” as well as combatting police bias in ways that he describes “goes beyond reform,” asking “every sworn police officer in Seattle to watch the 8 minutes and 46 seconds of George Floyd’s murder in Minneapolis.”

Former WA. State Representative Jessyn Farrell, also touched on issues surrounding modifying police response, writing “Police should be able to focus on preventing and responding to violent crime, property crime, drug distribution, and similar issues. They should provide this focus across all of Seattle, without over-policing BIPOC neighborhoods.”

Farrell also made a stance for climate change, housing and other topics through her campaign.

In 2017 she left her four-year role as a state representative to run for Seattle Mayor, coming fourth in the primary that year. A longtime environmental and transit activist, she decided to give it another shot this year, raising around $224,000 in donations.

But politicians were not the only ones to watch in this year’s primary – over $400,000 was raised in support of Colleen Echohawk, the executive director of nonprofit Seattle Chief Club, an organization dedicated to serving local Native-American communities.

Echohawk has taken on a “People First Platform” vowing to provide equity and change city hall.

Echohawk is also the only candidate who has worked within the Community Police Commission (CPC), which she believes gives her an “unparalleled perspective into the failures of the current system.”