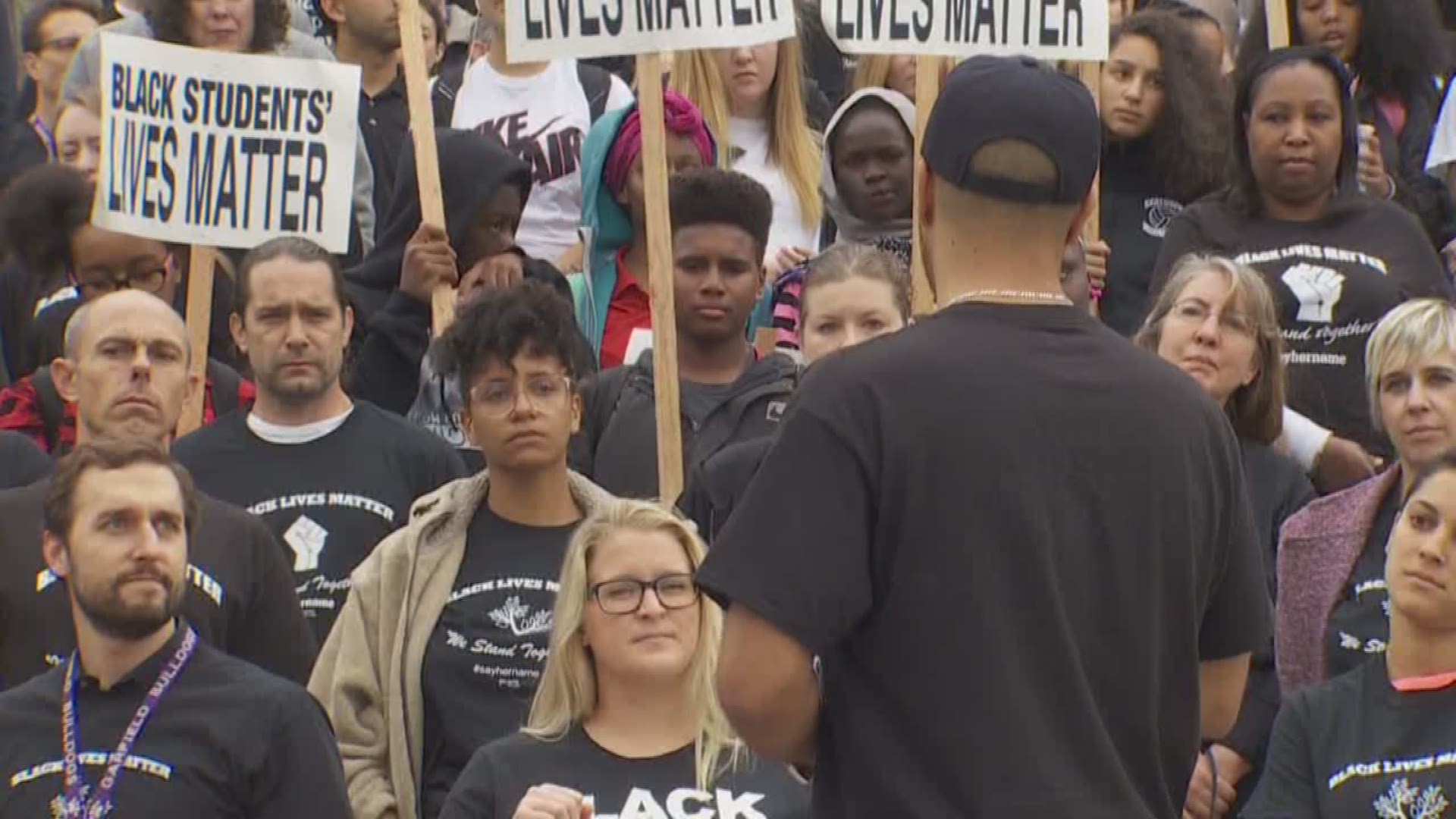 High school teacher and organizer Jesse Hagopian says the day of action offers opportunities to address racial inequities in schools. He notes, for example, that graduation rates are disproportionately lower and suspension rates much higher for black students compared to white students.

At Garfield High School, teachers held a rally on the steps during the lunch hour, sharing their struggles and determination to close the achievement gap for their students.

"I want everyone to be treated fairly and equally and to have the same opportunity to have a happy life," said P.E. teacher Stuart Hamilton, who wore one of the t-shirts.

Special Education teacher Janet Dubois shared her experience as a mother after her own son struggled in school and she eventually lost him in a police shooting.

"When our kids are failed, and they have to go to alternative places and end up with their lives hanging in the balance because someone does not care," she said tearfully.

Garfield senior Bailey Adams, who is African-American, called it a life changing day for her.

"All of my years I've been in school, this has never been talked about," she said. "Teachers have never said anything where they're going to back their students of color."

Some have questioned whether the action in public schools is appropriate.

The 5,000-member union representing Seattle educators is backing it and the school district says the teachers are exercising their free speech rights.

“We are united in our commitment to eliminate opportunity gaps. Teachers have a First Amendment right to wear their speech. We respect our teachers’ rights and desire to express themselves. T-shirts are a good visual. We hope the message inspires people to do the work on eliminating opportunity gaps,” said a Seattle Public Schools spokesman in a statement.

Meanwhile, the district is in the midst of a week campaign to eliminate opportunity gaps in schools, including disparities in achievement between white students and students of color.

A rally will be held Wednesday night at Washington Hall to expand the discussion. Grammy award-winning artist Kimya Dawson and Seahawks defensive end Michael Bennett are expected to attend.

The rally is 6-8 p.m. Washington Hall is located at the corner of 14th Avenue and E. Fir Street in Seattle.

Teachers at John Muir Elementary were planning to wear Black Lives Matter t-shirts to school for one day last month, but that was canceled due to security concerns.