The Seattle Sounders FC celebrated their second MLS Cup championship with a citywide parade and rally. 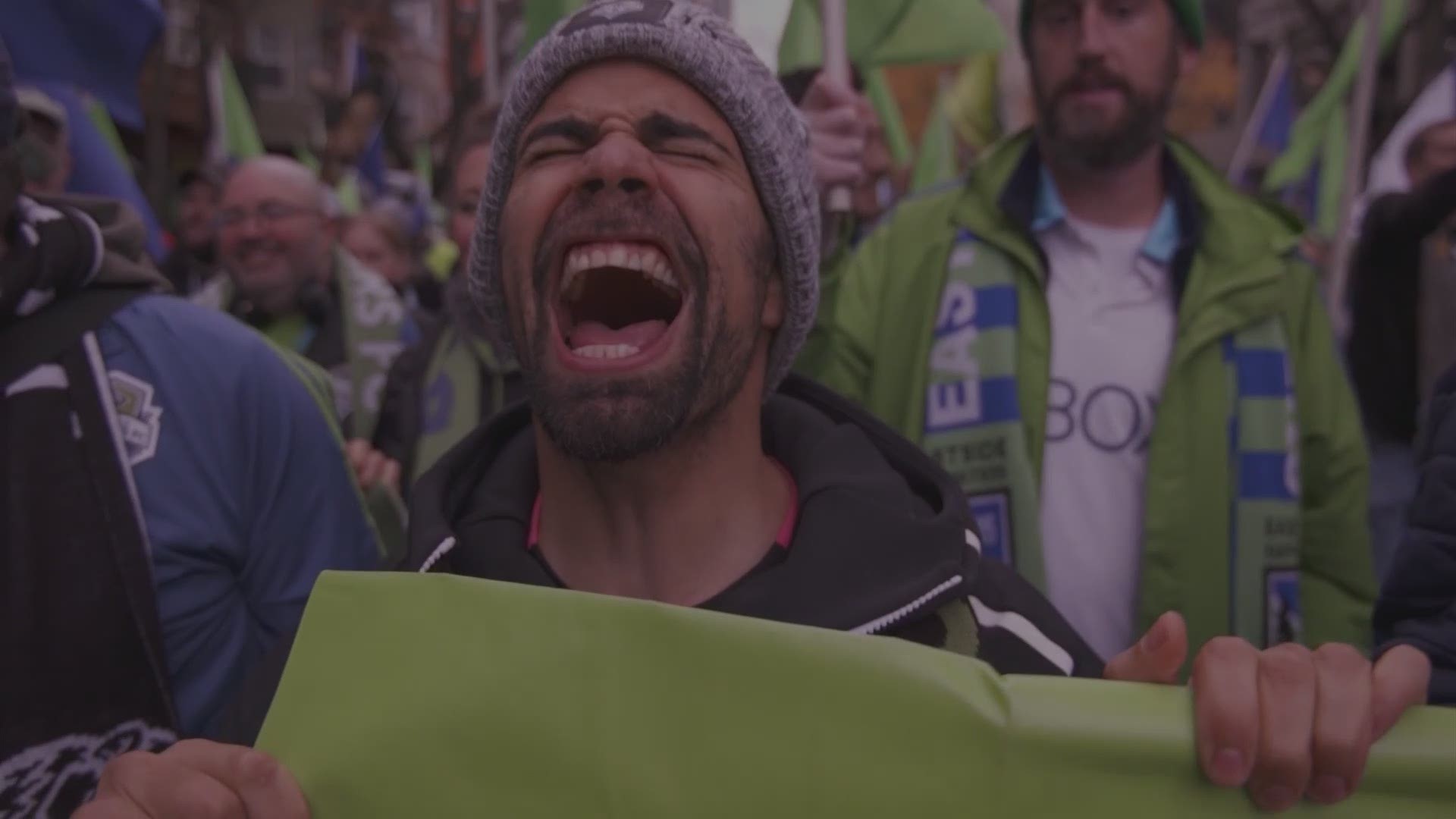 The team, along with Sounders owner Adrian Hanauer and minority owners, loaded on double-decker buses at Westlake Park about noon to travel the parade route along Fourth Avenue. There were two trophy cups on the bus for the parade – one for the 2016 MLS championship and one for this year’s title.

“It’s awesome,” Sounders Goalkeeper Stefan Frei said from the bus. “Super happy to be able to do this with the fans.” 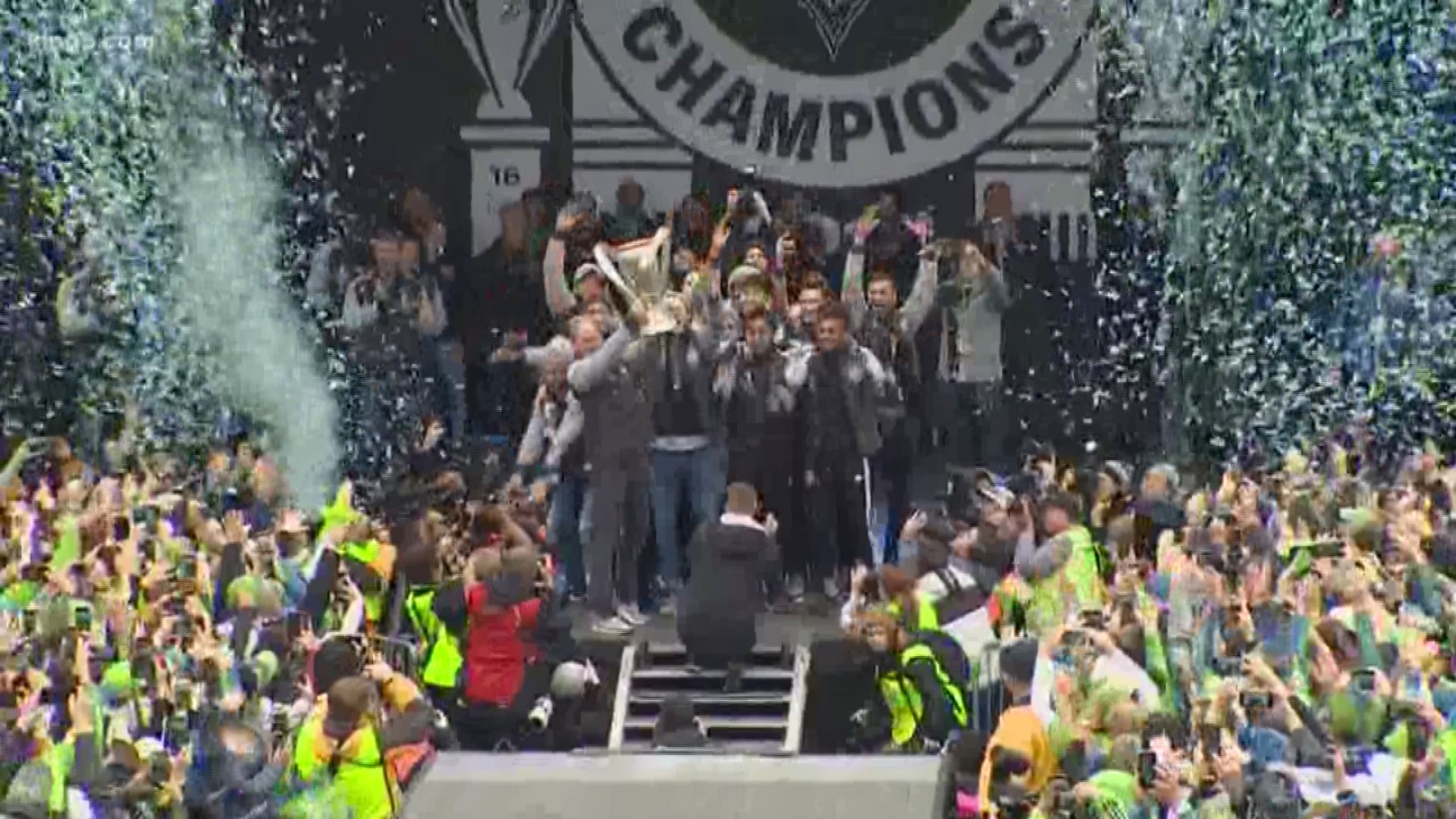 Seahawks quarterback Russell Wilson and singer Ciara, who are new owners of the Sounders, hoisted the trophy for fans before hopping on the bus. Wilson said he and Ciara were “fired up” after the win. 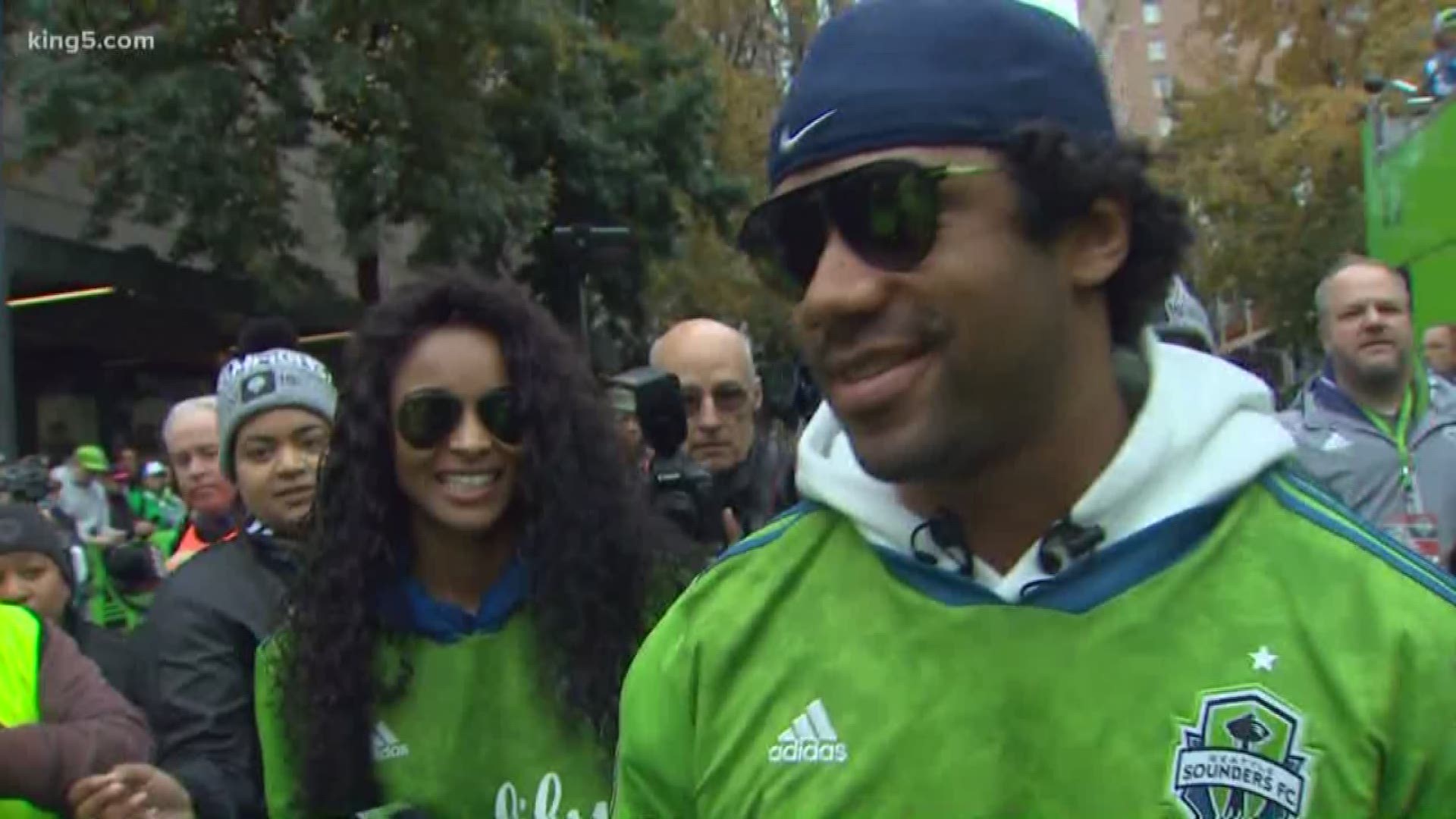 Seattle Mayor Jenny Durkan also rode on the team bus, saying the championship win was "a great thing for the city."

For Sounders Head Coach Brian Schmetzer, the parade was all about the fans. Schmetzer actually got off the bus mid-route to walk alongside fans.

“I love being with all my fellow Seattleites," he said. "I love that everyone is out here in a good mood.”

Not all Sounders were able to be present for the festivities. Eleven players were absent, because they were traveling for international duty.

The parade route started at 4th and Pine and stayed on 4th until turning onto Denny Way and then 2nd Ave. N. towards the Seattle Center. 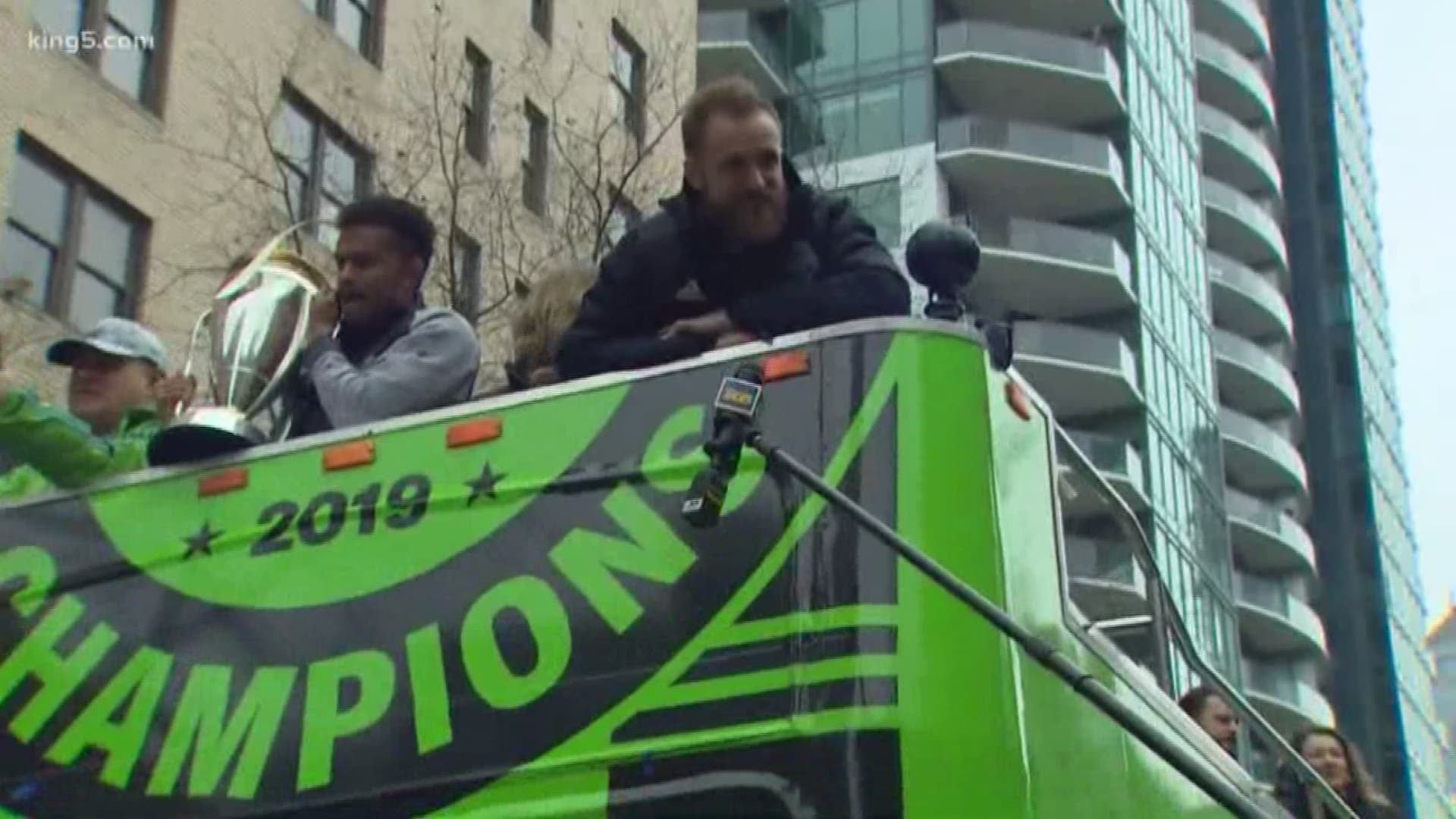 The parade was followed by a championship rally on the Fisher Pavilion Lawn at Seattle Center.

Players walked through a gauntlet of fans to escort the cup to the stage before speaking before fans.

"It's for you guys," Sounders forward Will Bruin told the crowd. "You guys deserve it. Let's get a third one!"

Alan Hinton, one of the most notable contributors to the growth of soccer in the Pacific Northwest, came to Seattle 40 years ago for soccer. He says to watch the Sounder win the MLS Cup is "a dream come true."

“I always felt the Sounders was the best club, and when I got the job here in November of ’79, it was just wonderful," said Hinton, who has worked as the Sounders FC head coach.

Before the parade on Tuesday morning, Sounders Captain Nicolás Lodeiro draped a team scarf around a statue of Chief Sealth at Tilikum Place in downtown Seattle. His son stood by his side as Lodeiro placed the scarf around the statue's neck.

“It’s a special moment, because now I play for him,” Lodeiro said. 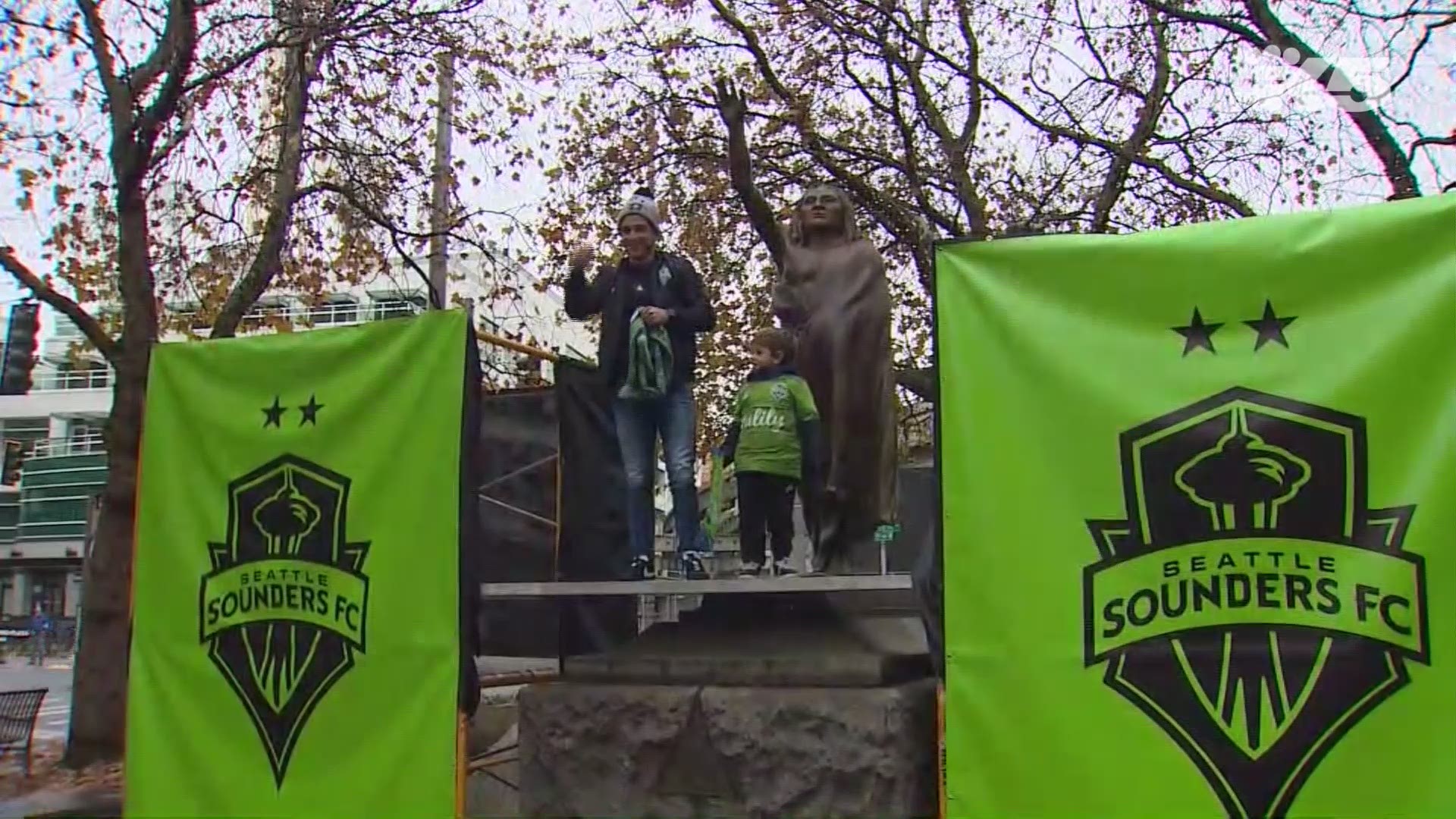 This is Seattle's second MLS Cup win in franchise history. Both victories have been over Toronto FC.

On Sunday, the first half was intense but scoreless. Then Seattle came out strong in the second and put away three goals before Toronto finally scored one in stoppage time.

The 3-1 victory played out in front of a sold-out crowd at CenturyLink Field. The crowd of 69,274 is the largest attendance of any sporting event at the stadium.

"[There were] lots of people, and everybody's pretty excited," said Robyn Wyatt, a season ticket holder who went to the MLS Cup. "So most fans, you know up on their feet, yelling and cheering. It's probably the loudest I've heard it for any Sounders game."

Wyatt won't be able to attend the championship parade, but said she and her kids "were just really excited" to get to go to the game.

Before the game on Sunday, fans packed into Pioneer Square for a rally and March to the Match.

Seattle rapper Macklemore, and co-owner of the team, hyped up the crowd with a performance at Occidental Park.

1 / 23
Jimmy Bernhard
Thousands of fans packed Pioneer Square and then marched to CenturyLink Field for the MLS Cup, Nov. 10, 2019.