SEATTLE - A group students from Seattle University’s Electrical Engineering program are finishing up a year-long project where they brought power to a small village in Africa. 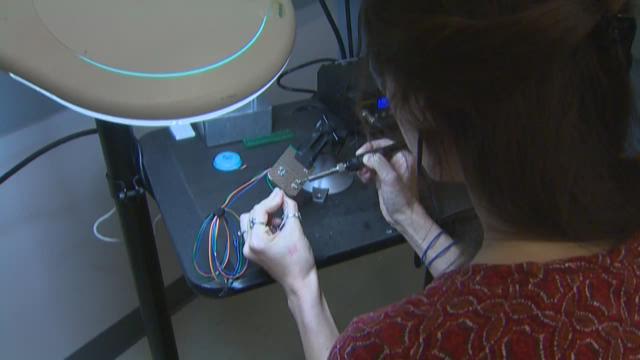 SEATTLE - A group students from Seattle University’s Electrical Engineering program are finishing up a year-long project where they brought power to a small village in Africa.

The students worked with the non-profit KiloWatts for Humanity to design a microgrid that powered the village after years in the dark. Right now, more than 1.1 billion people in the world are without power, many of them living in small rural communities throughout the world.

“This project is putting an emphasis not only on microgrid design but making sure microgrids around the world are sustained,” senior Natalie Swope said. “So we monitor what is going on post implementation which is really important for making sure that everything keeps running and people have access to electricity and there is a prolonged life of the project.”

In order to monitor the grids in real time, the students created a device called the Data Acquisition System that allows them to watch in real time to ensure that everything is working properly. Last week one of the students helped out the village when something went wrong.

“We noticed an anomaly in some of the on-site data in Kenya that we were watching and I was able to contact the on-site manager and walk him through solving the problem thanks to the information that we found,” senior George Goldsmith said.

The project has had a profound effect on many of the students, some have even been able to travel to Africa to see their work first hand.

If you would like more information about the non-profit KiloWatts for Humanity you can find it here: http://kilowattsforhumanity.org/kwh/

If you would like to see the video produced by Seattle University about their recent efforts, you can find that at this link: https://vimeo.com/119602332