Seattle rideshare drivers protested their wages on Wednesday, during a nationwide strike by Uber and Lyft drivers. 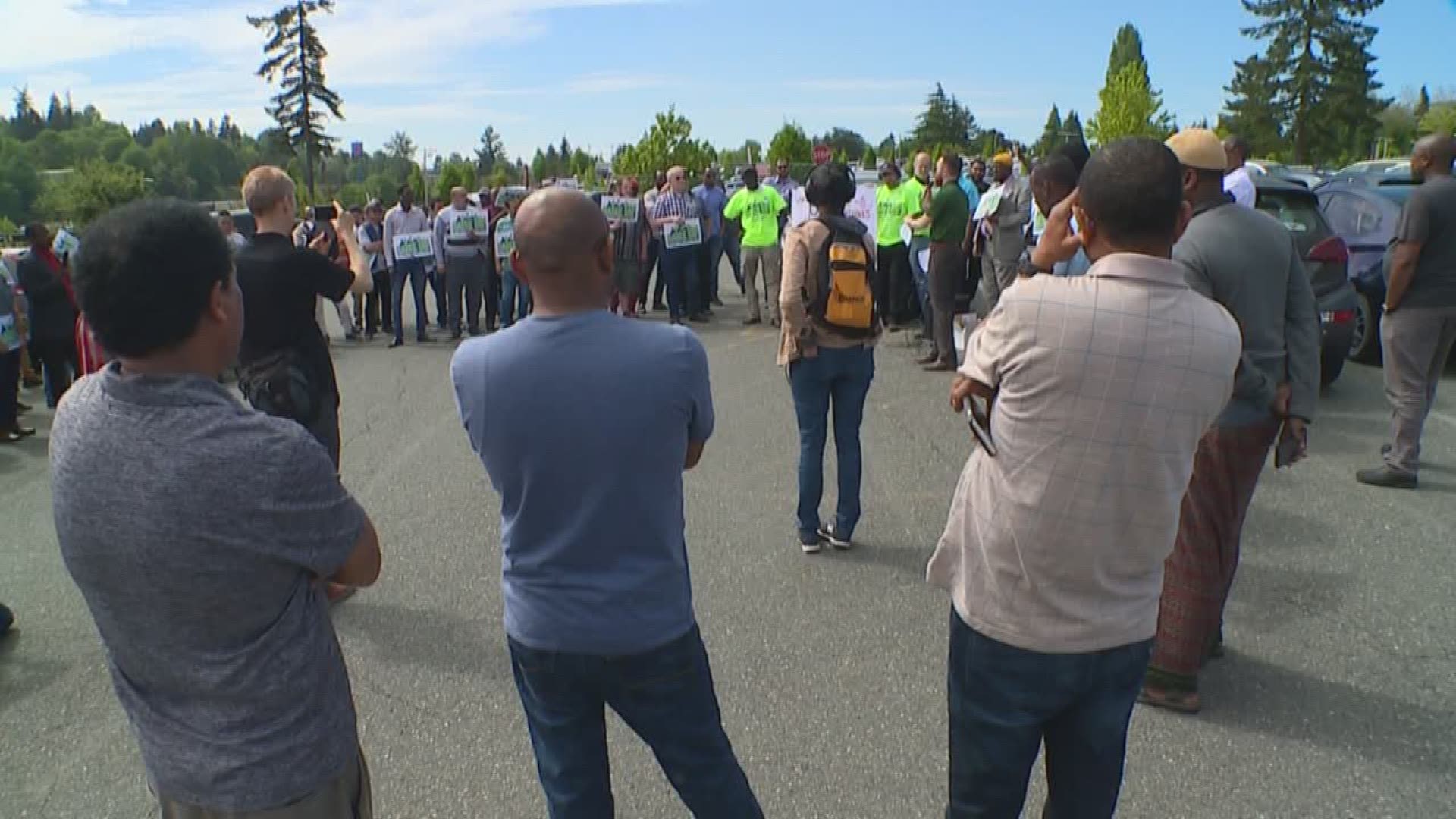 Rideshare drivers in Seattle protested their wages on Wednesday, as part of a nationwide demonstration.

Uber and Lyft drivers say their companies are taking an increasing cut from each fare, leaving them less in daily wages.

“Every day when I leave home, I always set a goal that I'm going to make that much, but somehow it's low,” said Pardeep Singh, an Uber driver from Auburn.

He and other drivers, organized by Teamsters Local Union 117, gathered to send a message to Uber that drivers deserve more money.

Uber's much-anticipated initial public offering on the New York Stock Exchange is Friday and the company's value is expected to skyrocket.

The App-Based Drivers Association, part of the Teamsters, said in a new report that when Uber and Lyft first came to Seattle, drivers took home 80 percent of what riders were charged. Today, on a median Seattle trip, drivers pocket just 69 percent, the group said.

Uber disputes the drivers' analysis of fares, saying the report is based on a tiny fraction of trips and is skewed to make it look like drivers aren't earning very much.

Uber said its share of fares was 21 percent in 2018, though the figure varies from 12 percent to 24 percent by region.

The company said Wednesday it didn’t see any significant impact on the reliability of its service, compared to the monthly average.

Drive Forward Seattle, an organization founded by Uber which represents drivers, said in a statement that the relatively small number of participants in Wednesday’s events do not represent the views of thousands of drivers working in the Seattle area.

“Thousands of drivers will continue to be on the road today and in the future because they make a living wage and enjoy the ability to be their own boss,” the group said.

Lyft, which beat Uber to the public market last month, is dealing with similar issues. On Wednesday, drivers for both companies participated in strikes across the country, pledging to turn off their apps for hours to call attention to their plight, although it's unclear how many actually took part and the impact on customers appeared minimal.

"That would be the nightmare scenario," said Dan Ives, managing director of equity research at Wedbush Securities. "That continues to probably be the biggest threat to the business models."

Although both Uber and Lyft have been growing at impressive rates, they have also been consistently losing money. Lyft, with its 1.1 million drivers and 18.6 million active riders in more than 300 markets in the U.S. and Canada, lost nearly $3 billion since its 2012 inception. Uber, which boasts 3.9 million drivers for its ride-hailing and food delivery services in more than 700 cities and 63 countries worldwide, lost nearly $8 billion over a decade.

By continuing to treat drivers as independent contractors, Uber and Lyft avoid paying for health insurance, overtime or benefits such as workers compensation, said Shannon Liss-Riordan, partner at Lichten & Liss-Riordan, who has represented drivers in the employment classification cases.

"This is basically a big giveaway to these massively successful companies, often off the backs of the workers who are fueling their success," Liss-Riordan said.