After postponing play, professional Seattle teams like the MLS Sounders and WNBA Storm are now looking to get people to vote this November. 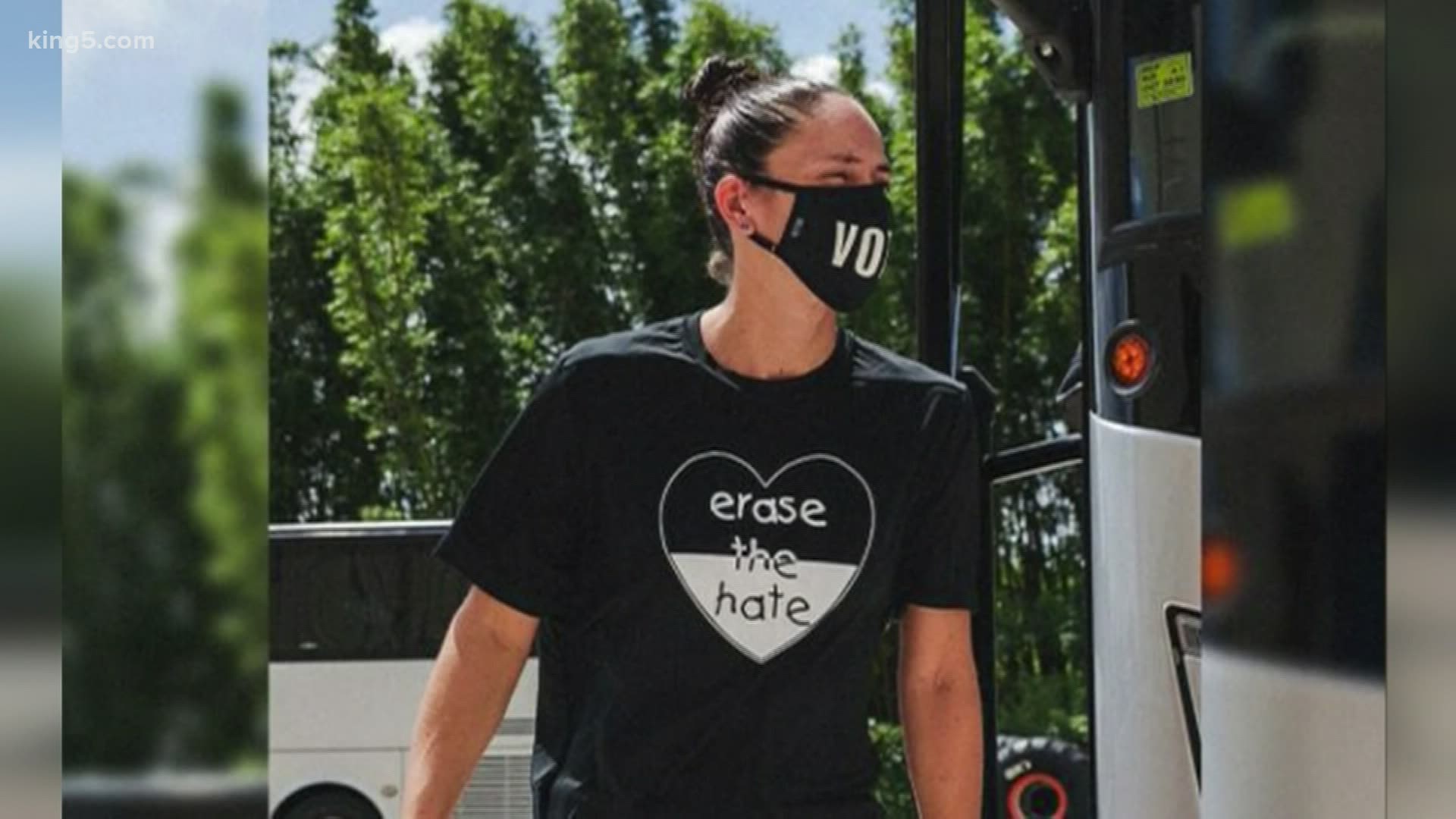 SEATTLE — Following a similar move that's happening across the country, several Seattle professional sports leagues have opted not to play games or have protested in another way in response to the shooting of Jacob Blake in Kenosha, Wisconsin.

Like other local teams, the Seattle Storm postponed one of its games in solidarity.

Members of the WNBA team wore matching black t-shirts that said "Erase the Hate" before a game against the Chicago Sky on Sunday. The team also has been wearing masks that say "VOTE" across them.

On NBC's Meet the Press with Chuck Todd, Storm superstar Sue Bird discussed the boycott and the impact it has on not only the sports world, but changes it inspires in owners and sponsors.

"I do think the WNBA is in a unique position in that we have a lot of support from our owners. In fact, I know myself, a bunch of other players from other teams got calls directly from their owners saying, 'We support whatever you want to do.' So I think a lot of it is more so about, like you said, the corporate sponsors, trying to get them to understand where we stand, what we believe in, what we're fighting for. But this isn't new for us. We've been doing this for years, and years, and years. And I think what was so special about this moment was an opportunity... for all of these leagues to be unified. And that’s when you know -- we've learned in the WNBA when we're unified as one voice, that's where the impact is felt for us. So to have all these leagues together, I mean, you've seen what's happened. It's been around the world," she said.

Bird is also the vice president of the Women's National Basketball Players Association.

She said that she agrees with Washington Mystics player Natasha Cloud in that some players worry that even with blackouts at games and a newfound discussion on racial equality, they still aren't doing enough.

"It's never enough. You want to do more. And I think what was great about having all here, getting us all together, we got to talk through these things and understand it takes time. And all you can do is what we've been doing. We've actually been doing the work. And to be honest, I've had a front-row seat with, you know, my girlfriend Megan Rapinoe. She took a knee four years ago. It took four years for that to come back around. So personally for me, I like to share that message with the players because, while it doesn't feel like you're doing enough and while people are going to come at you... you have to, like, find solace in the fact that we actually are doing the work," Bird continued.

The Storm's postponed game against the Las Vegas Aces has been rescheduled for Sept. 13.