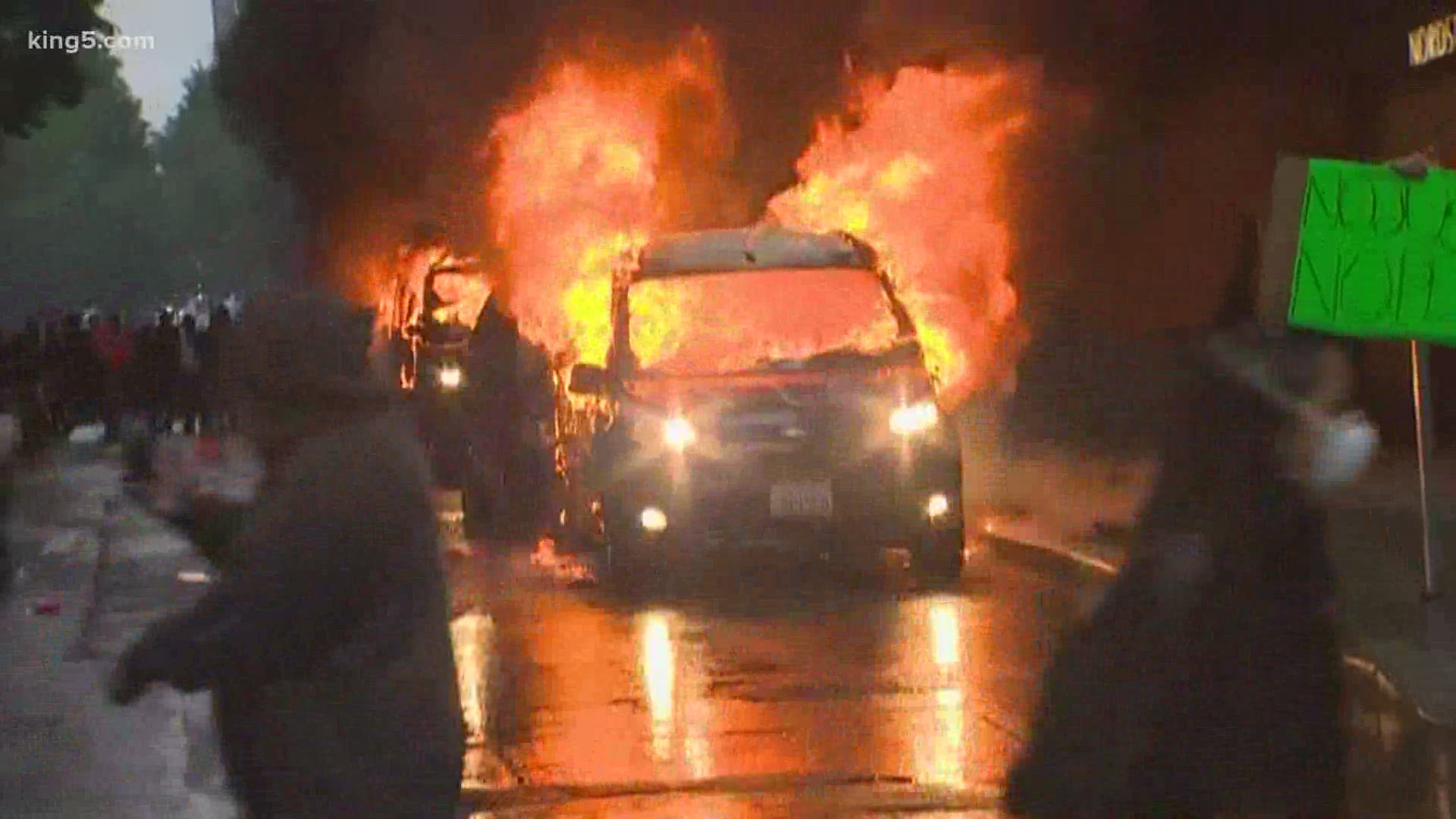 Seattle’s mandatory citywide curfew expired at 5 a.m. Monday after violent downtown protests on Saturday that started as a peaceful rally over the death of George Floyd in Minneapolis police custody.

There were no reports of violence on Saturday in Bellevue, however, looters made their way to downtown on Sunday.

Bellevue also requested the support of the National Guard.

Tukwila was under a curfew from 9 p.m. Sunday to 6 a.m. Monday after looters broke into stores at Southcenter and threw rocks and projectiles at officers.

Auburn enacted a curfew from 11 p.m. through 7 a.m. Monday in response to looting at several retail locations.

On Saturday in Seattle, crowds were ordered to evacuate the downtown corridor immediately when the curfew was first imposed. 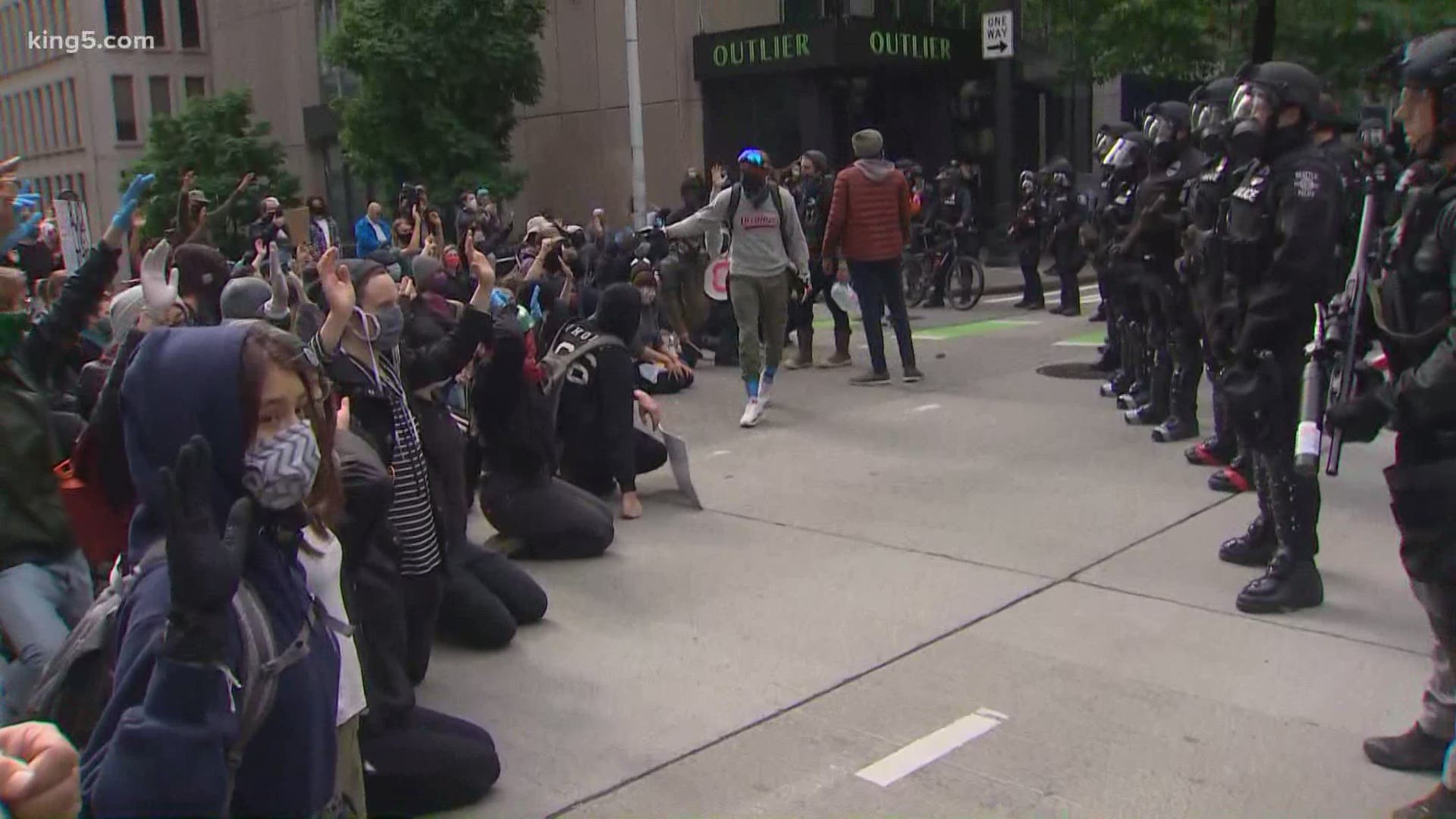 Several Seattle police and city transit vehicles were set on fire, along with the property damage and looting of dozens of downtown businesses.

Seattle Police Chief Carmen Best said at least 55 people were arrested “for a variety of offenses from assault, to arson, to destruction and looting.”

Gov. Jay Inslee activated up to 200 members of the Washington National Guard to help the city of Seattle. Guard personnel will be unarmed and work under the direction of Seattle city leadership.

Inslee's Chief of Staff David Postman said this is the first time the National Guard has been called into Seattle since the WTO Riots in 1999. 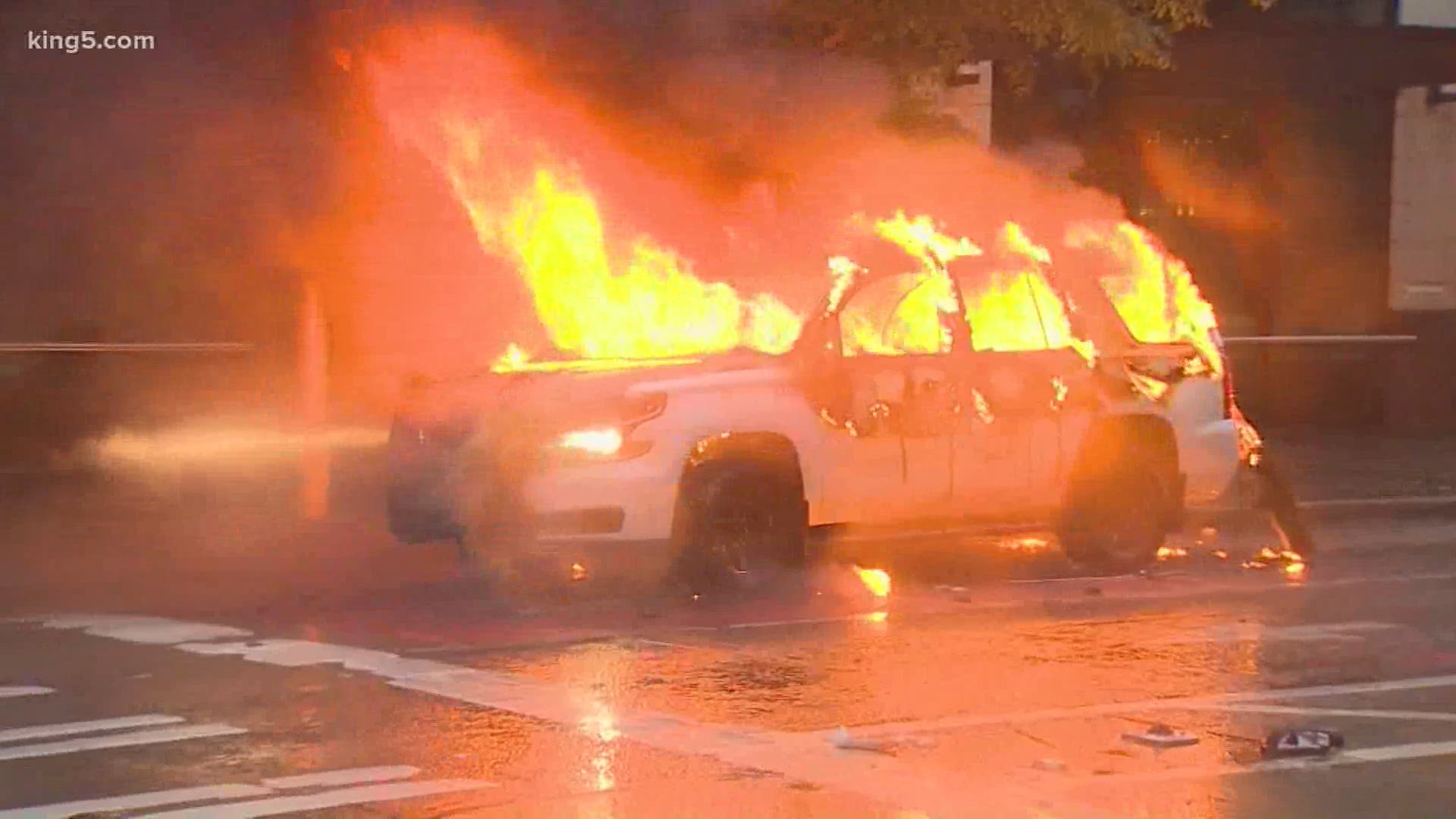 Both directions of I-5 through downtown Seattle were also shut down for several hours on Saturday and Sunday after demonstrators entered the freeway. 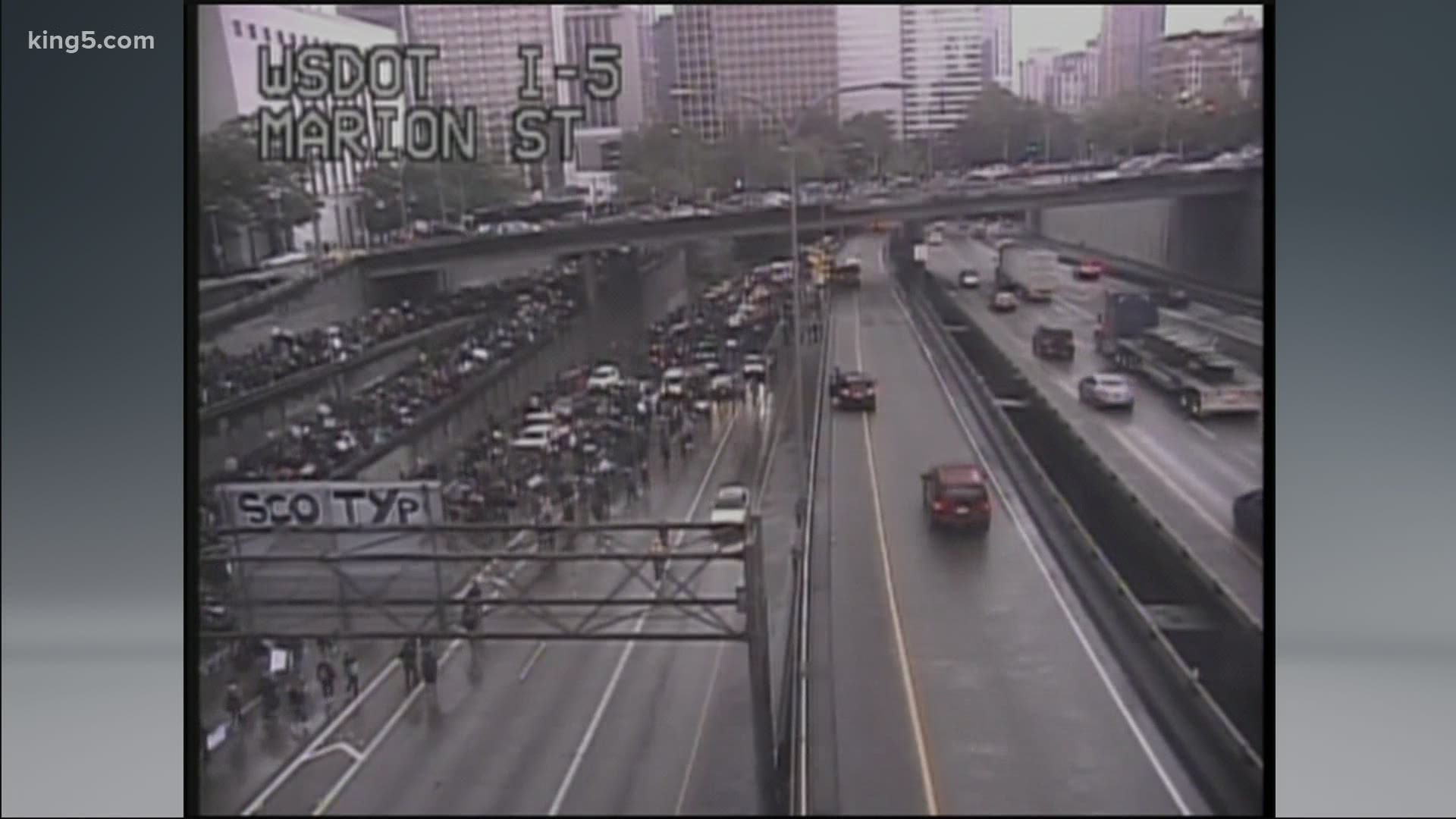 Emergency alerts were sent to cell phones across the region from the city's Office of Emergency Management.

Mayor Durkan spoke about the violence and her curfew orders shortly after 6 p.m. Saturday. "The escalated incidents of destruction and violence do not honor Mr. Floyd."

Durkan emphasized that George Floyd's family has condemned the destructive protests that have been happening across the country this week. The violent demonstrations "cannot and will not be allowed to continue," Durkan said.

A woman who attended a peaceful rally Saturday morning told KING 5 she is furious that other people not involved in the peaceful protest became destructive.

"They hijacked our protest... I am furious," she said. "It has totally taken away from what we came down here to do." 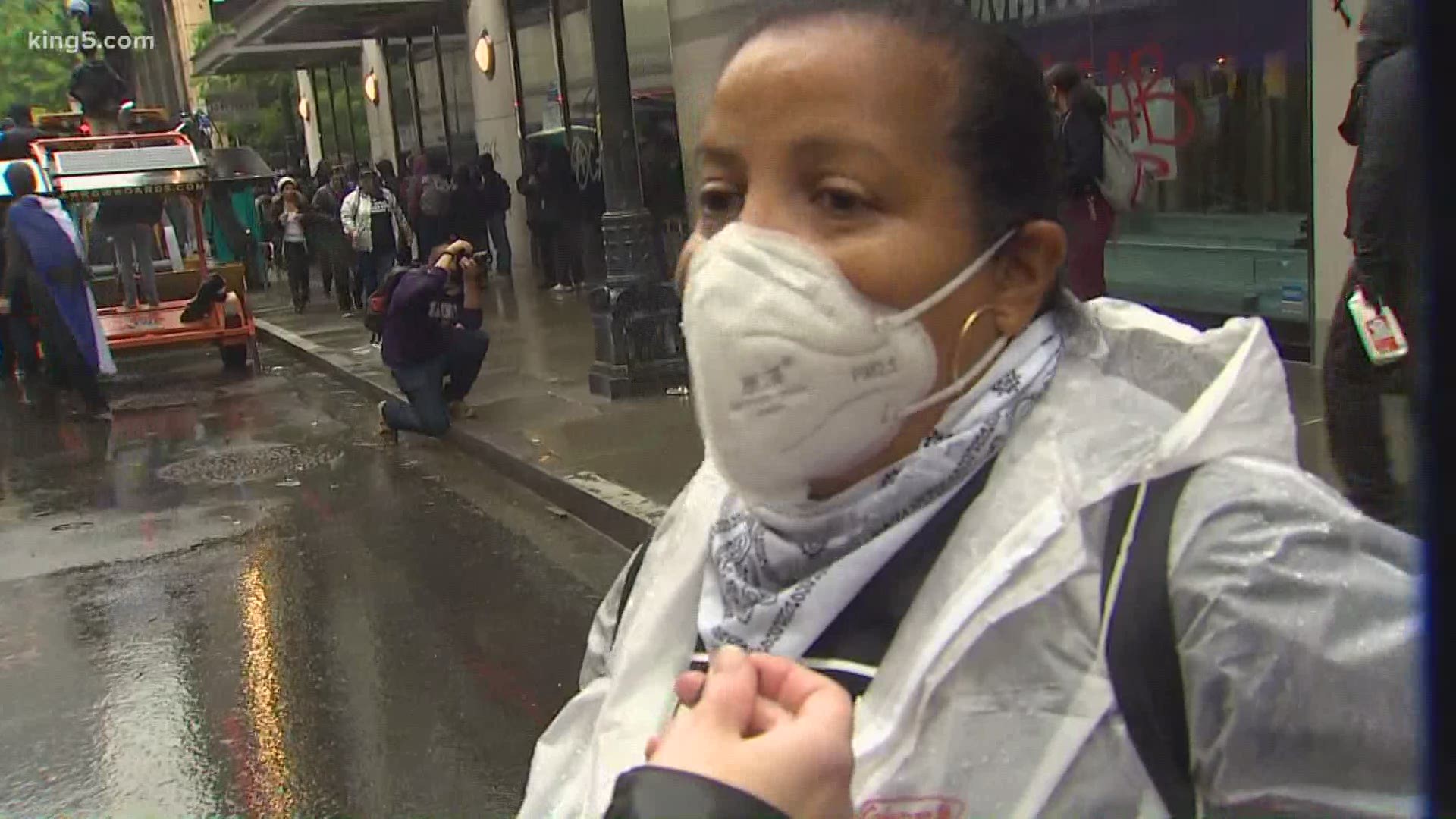 Governor Jay Inslee issued a statement regarding the protests Saturday afternoon, saying he respects the right of all to gather peacefully but that destruction would not be tolerated.

"As people gather today to protest the unjust death of George Floyd, I hope they do so peacefully and safely. Everyone has the freedom - and the right - to demonstrate and speak their mind. However, violence and destruction have no place in Washington state or our country.

Together, we grieve for the death of George Floyd, and many, many others. The events in Minnesota and across the nation the past few nights have been stunning and illustrate how inequity causes people to lose faith in their public institutions. The trauma inflicted on generations of people of color must be acknowledged, and more must be done to correct it. Feeling second-class in one’s own community does not make people feel safe. Insecurity hardens into anger.

I fully support the right to free speech and peaceful assembly. I applaud every Washingtonian standing for what they believe in, but we must do so in a way that allows space for these important and necessary discussions, not in a way that inspires fear.

"If you choose to protest today, please be safe and peaceful. These are important issues that deserve our full attention, without distraction from violence and destruction. Without solutions to inequity, the long road to justice will run even longer."