Montlake Bridge in Seattle closed until Sept. 3 while crews work on repairs

The nearly month-long closure will be followed quickly by five weekend closures for mechanical rehabilitation work. 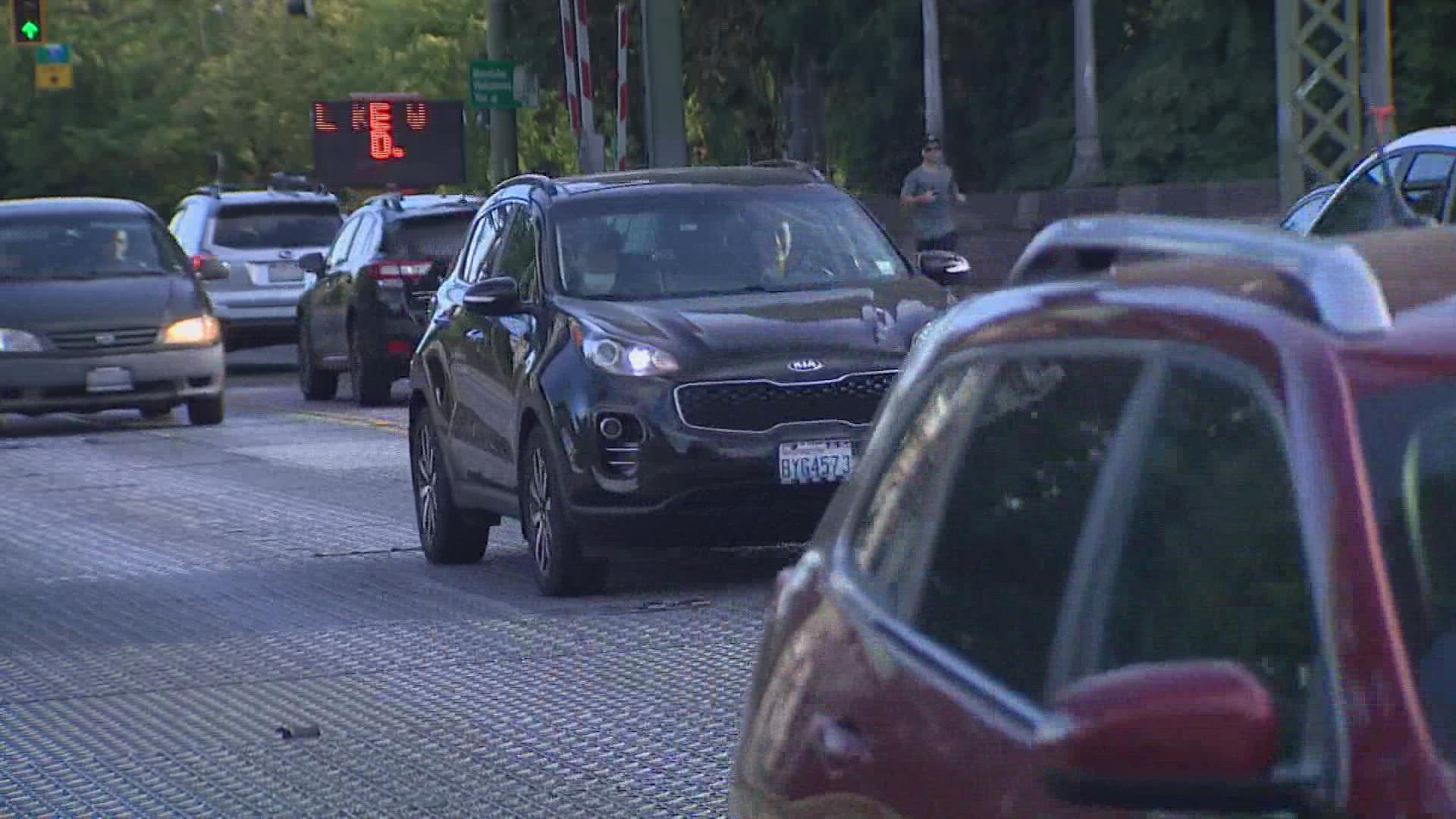 SEATTLE — Beginning Monday, Aug. 9, the Montlake Bridge closed for 26 days as crews replace the metal grid deck that has deteriorated over time.

The bridge, which typically carries 60,000 vehicles each day and is a vital connection between eastern parts of Seattle and the University District, will be closed to vehicles until Sept. 3.

Plans for the closure came in March when the Washington State Department of Transportation (WSDOT) said it needed to repair the 96-year-old bridge through two phases, costing about $7 million.

WSDOT said during Phase 1, it will replace all 84 of the bridge’s metal grid deck panels, which haven’t been replaced in 20 years, as well as the two expansion joints.

"With age, we’re seeing more and more failures, pieces of the bridge deck break. Each time that happens they need to be repaired," Brian Neilsen with WSDOT said Tuesday during a briefing.

Crews have already had to close the bridge seven times this year for these emergency repairs.

Neilsen explained that the design for the new deck is the same as the current one with underlying steel supports that engineers hope will make it more durable.

The nearly month-long closure will affect certain routes for King County Metro Transit that use the Montlake Bridge and cause some rides to take much longer.

Travelers are encouraged to check their routes on the King County Metro website or consider alternatives like using the light rail between Capitol Hill and the UW Station or walk and cycle across the bridge since pedestrian pathways will be available throughout the closure.

"Doing this major maintenance now and giving ourselves some breathing room is really critical and important, and we're glad to be working with WSDOT to support them in this," said Jon Layzer with the Seattle Department of Transportation (SDOT).

Layzer added that SDOT is working to limit construction on detour routes, as well, to limit further congestion. SDOT's travelers' webpage will also remain up-to-date with traffic conditions around the Montlake Bridge area.

The Montlake Bridge is also a common access route to UW Medicine's facilities like the UW Montlake Medical Center. Patient care will continue uninterrupted during the closure, but the hospital is recommending people plan additional travel time to make it to their appointments on time.

"Time is an issue for a lot of people. When you need to get somewhere urgently, adding time is concerning," said Emily Grob, a nurse practitioner at UW Medical Center. She said some of her colleagues are planning to walk or bike to work during the closure.

Phase 2 begins in early September with weekend closures while crews rehabilitate the bridge’s mechanical systems, which includes replacing the 25-year-old center lock to ensure the drawbridge can open and close properly.

During Phase 2, the bridge will have to stay in its upright position, so all traffic over the bridge will be prohibited. This will last about five weekends, according to WSDOT.

Phase 2 work is scheduled around major events like Husky football games for the following weekends:

The last time crews worked on the bridge was last year when WSDOT had to weld patches on the metal grid deck nine separate times.

However, the neighborhood will be happy to know that the SR 520 project, which updated the roadway to withstand severe earthquakes, is using the closures to its advantage and will be conducting some cleanup around the former Montlake Market and gas station.

UW Medicine said that its facilities near the closure will not be affected and remain fully open throughout Phase 1 and Phase 2.

The nearest alternatives to the Montlake Bridge are University Bridge and Interstate 5 for those who still have to drive over Portage Bay.