The reasons for closing are familiar complaints from small business owners: lower sales, a tough business climate in Seattle, no parking, and a customer base who can't afford to live in the city. 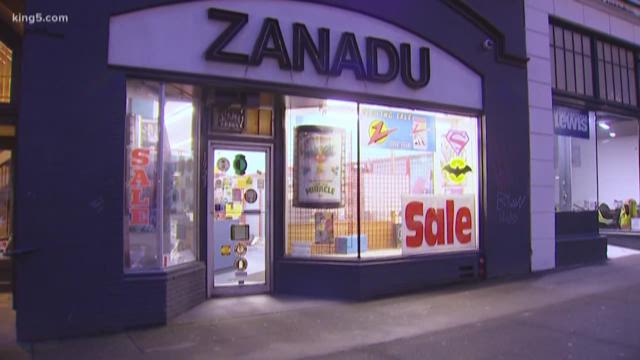 After being open for decades in Seattle’s Belltown neighborhood, Sunday night was the last chapter for comic book shop Zanadu.

For regular customers and employees, it was more than just a shop.

“We always like to be a community gathering place," Manager Howard Boyd explained.

The racks are filled with so many stories, but the best ones might not be under the bright covers of the comic books.

“It's a good place where you can come and you don't find too much of what's going on in the world; it's a place to come and escape,” Caine Watson explained.

The heart and soul of this small shop are the people, friends that owner Perry Plush will say goodbye to as they shut down for good. Plush says he’s going to miss the people.

“If you think there are characters in comics, you should see my friends and customers," he said.

Plush has embraced the cast of characters transforming them into my family.

“My whole life I grew up in a comic book store, I learned how to read on black and white turtles comics," store employee Casey Silvia said.

“You can be 60, not read comics in 20 years, and it's like boom you're a kid again you remember how it felt to get a comic off the spinner rack," Silvia explained.

Silvia has been working for Zanadu for 11 years and said the shop supported him when he launched his own comic book.

“It's just sad because places like this are what make the city,” Silvia said.

The reasons for closing are familiar complaints from small business owners: lower sales, a tough business climate in Seattle, no parking, and a customer base who can't afford to live in the city.

Silvia says his time at the store changed his life and the shop felt like a home.

“If it wasn't for Perry, I wouldn't be able to really survive living in this city; he's helped me so much,” Silvia said. “Being here and having this place, it was a dream and it's really sad that it won’t be here anymore.”

Perry plans to keep selling comics online at zanaducomics.com, but knows it will not be the same.

“It's not ending it's just a new adventure,” he explained.

The store was busy during its last few weeks with customers buying everything they can to take a little bit of Zanadu with them. Silvia finds some inspiration from the stories that brought them together.

“We've been eclipsed by the evil but comic books never end,” he explained. “The story's never over, people take what they found here and hopefully pass it on and continue elsewhere.”