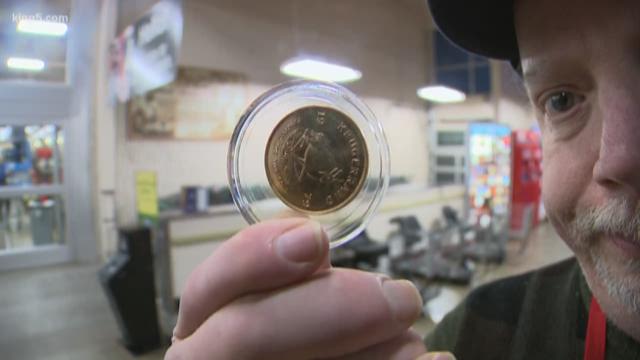 It's the time of the year when bell ringers from the Salvation Army get donations to support the charity's mission for the entire year. Earlier this week they discovered a very special donation in one of those red kettles, and now it appears it's happened again.

Bell ringers like Sean Gimenez are used to seeing plenty of cash and coins dropped into the kettle during the holiday season.

“The money that we raise helps pay for rent, phone, electricity, after-school programs,” he explained.

It's another color of coin showing up in kettles this season that has these guys excited. For the second time in three days, a gold coin was donated.

“This is a 1979 gold Krugerrand one-ounce,” Gimenez said.

“It will help a lot of people, once it gets back to the office and they do what they have to do with it,” Gimenez explained.

Shane Lason is the other bell ringer to strike gold.

That one was a 1997 Liberty coin dropped in a kettle at the Lynnwood Fred Meyer. Lason recently started going through tough times and truly knows how much every coin is needed.

“Everything kind of fell apart. I lost a toe, and I got sick and everything and my apartment was gone,” he said. “So instead of being down and out and crying and whining, I said get your stuff and go and that's what I did.”

They only have a couple days left to gather donations. The Salvation Army is hoping the generosity continues and they can meet their goals for this year.