About a dozen Seattle-area students for March For Our Lives rallied outside a Dino Rossi $500-a-person fundraiser at the Sahalee Country Club in Sammamish Wednesday night. 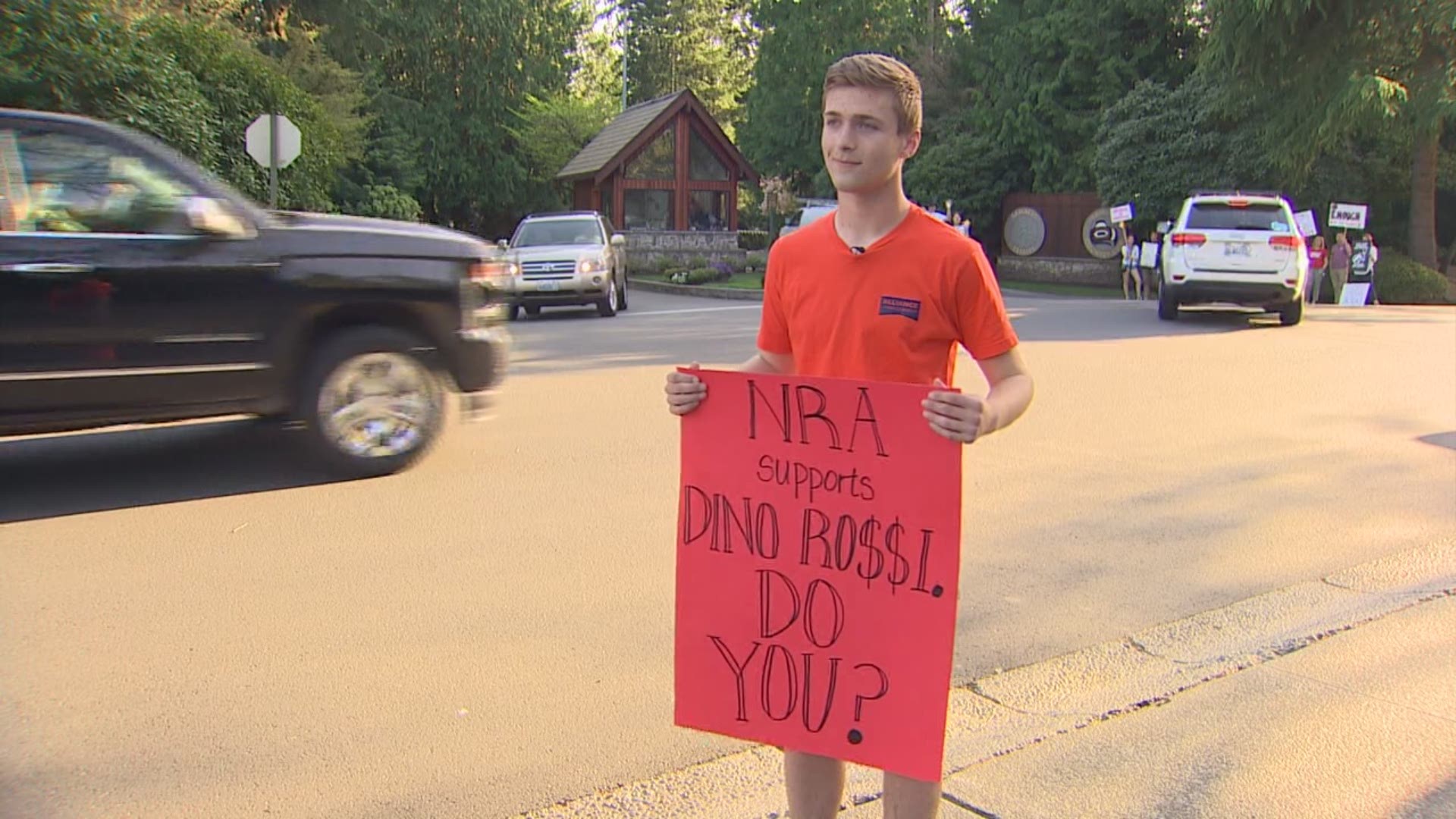 About a dozen Seattle-area students for March For Our Lives rallied outside a $500-a-person fundraiser at the Sahalee Country Club in Sammamish Wednesday night, hoping to speak with the candidate about gun control.

One of the organizers explained what he hoped what their demonstration might achieve. 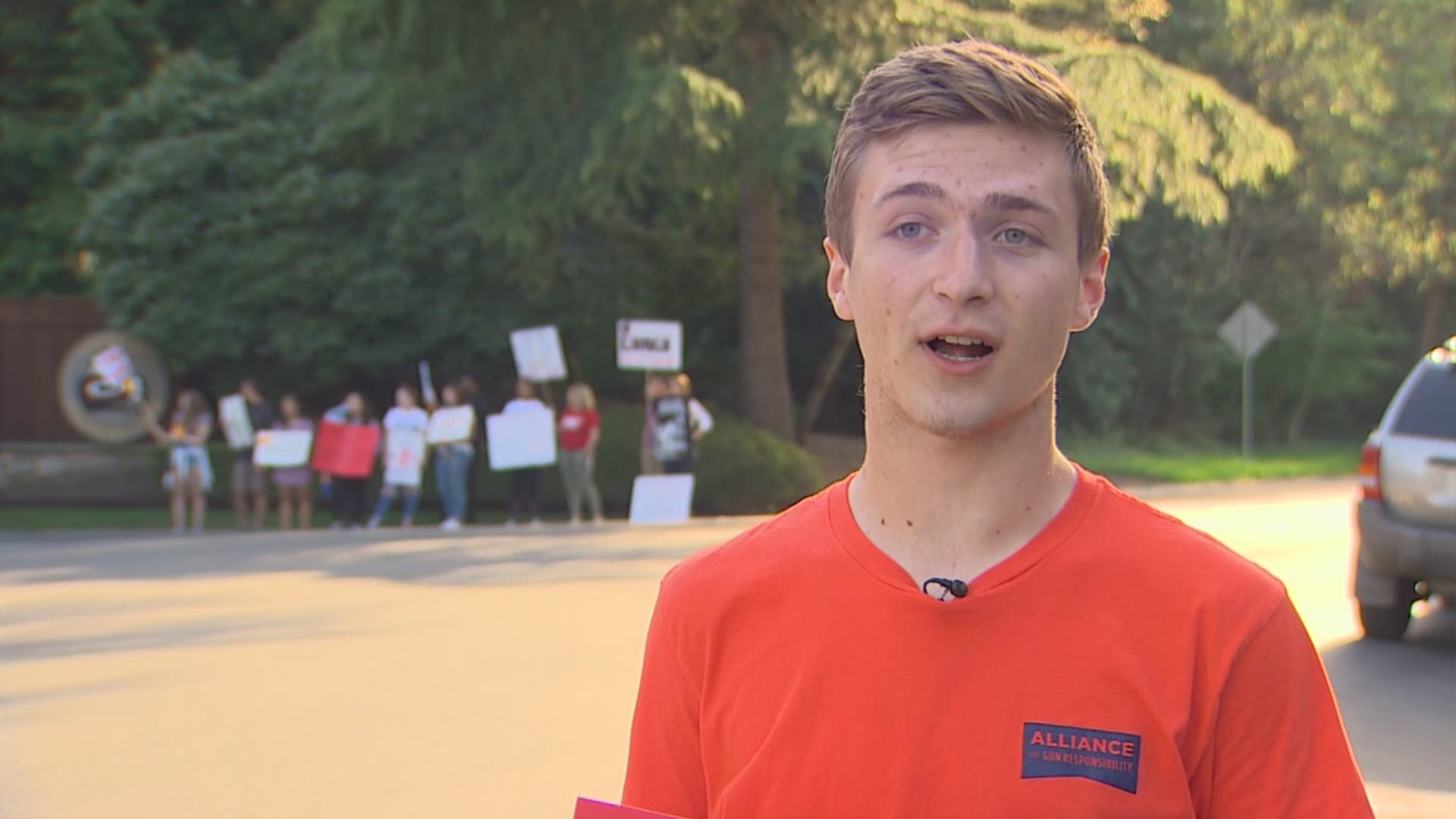 "We're hoping to get him to come to a townhall. It'll not be a yelling match, but a discussion to see where he stands on the issues because he really hasn't been present yet," said Bothell High School student Tyler Parris, who held a sign that read: NRA supports Dino Rossi. Do you?

Andrew Bell, who is Dino Rossi's campaign manager, disputed the claims about student requests for a townhall or claims the candidate wasn't willing to discuss gun issues. He said he believes activists in the Democratic party were behind the demonstrations.

Rossi has held multiple fundraisers in the past month. Fuse Washington, the state's largest progressive organization, rallied last Friday outside a Rossi fundraiser in Bellevue.

Rossi announced last year his run for the 8th Congressional District to replace Republican Dave Reichert, who is retiring at the end of his term.

Rossi served as an elected member of the Washington state senate from 1997 to 2003, where he chaired the powerful Ways and Means Committee.

He is also known as a former statewide candidate who narrowly lost the closest gubernatorial race in U.S. history.

Initially certified as Washington’s governor-elect in 2004, Rossi ended up losing to Governor Chris Gregoire in a lengthy recount battle that ended in the courts.

Rossi ran for governor again in 2008, then for Senate in 2010, but lost both subsequent statewide races.

The congressional race he now enters is considered a “toss-up” by the Independent Cook Political Report.

The district, which includes eastern parts of King and Pierce Counties, has, so far, always elected Republicans to Congress, but was carried by Hillary Clinton in 2016 and former President Obama in 2012.

In 2012, redistricting extended the district east across the Cascades, making it safer for Republican candidates. However, Democratic operatives believe the current political climate in Washington D.C. makes the seat a prime “pick-up opportunity.”

While the race initially drew more than eight Democratic challengers, several have since dropped out. The current Democratic candidates include Dr. Kim Schrier, former King County Deputy Prosecutor Jason Rittereiser, and Dr. Shannon Hader, who worked at the CDC as the director of the global HIV & TB division.

With Congressman Reichert’s decision not to seek re-election, the race will quickly become one of the most competitively and closely watched next year, ahead of the 2018 midterms.