British Columbia has seen, by every available statistic, a rise in refugee seekers. 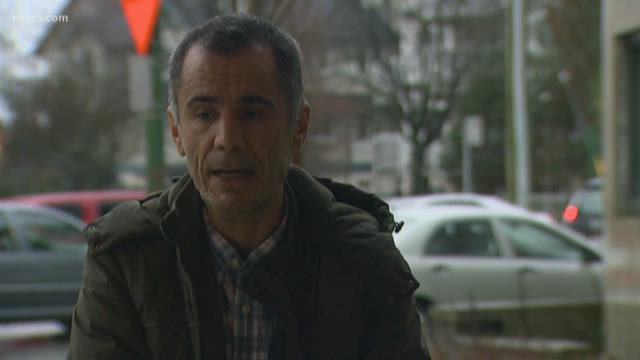 It was high noon when Ribwar Omar decided it was time.

It was time, he believed on a chilly November day, to make a run for it.

"I had to leave," said Omar, who hails from Northern Iraq. He decided to methodically plan his departure and entry into Canada.

"I took a flight to Seattle," he said, and "stayed one night there, in the hotel" before getting a ride to Blaine and the Peace Arch Park. He recounted what happened next.

"There were some pathways, made by humans or whatever," and "I saw lots of bushes, scared, insects snakes whatever." Yet, he darted through, finding a road called Zero Avenue just over he border and an officer hot on his trail.

"I could see a U.S. police officer next to his car with a dog. He saw me and ignored me and I went to the avenue. He was following me," said Omar, who kept running, "The Canadian police caught me and stopped me. 'Where you come from? Your passport? Why you come here? Why you cross the border?'"

Omar told the agent he was seeking asylum in Canada.

It is a story that is now oft repeated in British Columbia, which has seen, by every available statistic, a rise in refugee seekers.

The Immigrant Services Society of British Columbia (ISSBC) says numbers are up 76 percent in a year. Canada's Border Services Agency says the numbers are up not only in B.C. but substantially more in Manitoba and Quebec.

"Because of the Trump administration actions. Increased detentions, arbitrary arrest, raiding of places like 7-11s, suspension of protectory agreements has a lot of people concerned," said Chris Friesen of the ISSBC. "If they're going to be forced home, well maybe it's best to try and seek asylum."

There is also the thought, according to Friesen, that refugees can get income support, basic food, shelter, and health care while their claim is heard. Friesen says there is a backlog of 14-16 months until a claim is heard.

Provincial and government leaders aren't necessarily thrilled by the trend, and there has been grumbling about whether Canada can support the influx long term. Prime Minister Justin Trudeau, who famously tweeted about the country's welcoming stance, has wavered, telling reporters last year, "When someone presents themselves at our border, we have rules to follow, and we make sure those rules are followed."

The refugees are benefiting from a 2002 U.S.-Canada Safe Third Country Agreement, which opens the door for the refugee claim.

Friesen says, recently, there have been multiple cases of people using the U.S. as a "transit point" to enter Canada.

The CBSA also is taking a harder line publicly, in a statement to KING 5:

"There are rigorous immigration and customs rules to be followed and they are enforced at all times to keep our communities safe.

"Protecting Canada’s national safety and security is essential. All persons seeking entry to Canada must demonstrate they meet the requirements to enter and/or stay in Canada."

Omar is still awaiting a hearing, which may not come until 2019.

Was it worth it?

"Actually, it is, it is," he said emphatically, albeit with one regret. "The only thing that really, really hurts me -- my mom. She's getting too old. Every day she calls me, 'My son. When you are going to come back?' I never told her. I'll never come back."