Authorities closed off the Loffs Bay Boat Launch on the western edge of Lake Coeur d'Alene so crews could launch a large crane on a barge to the crash site. 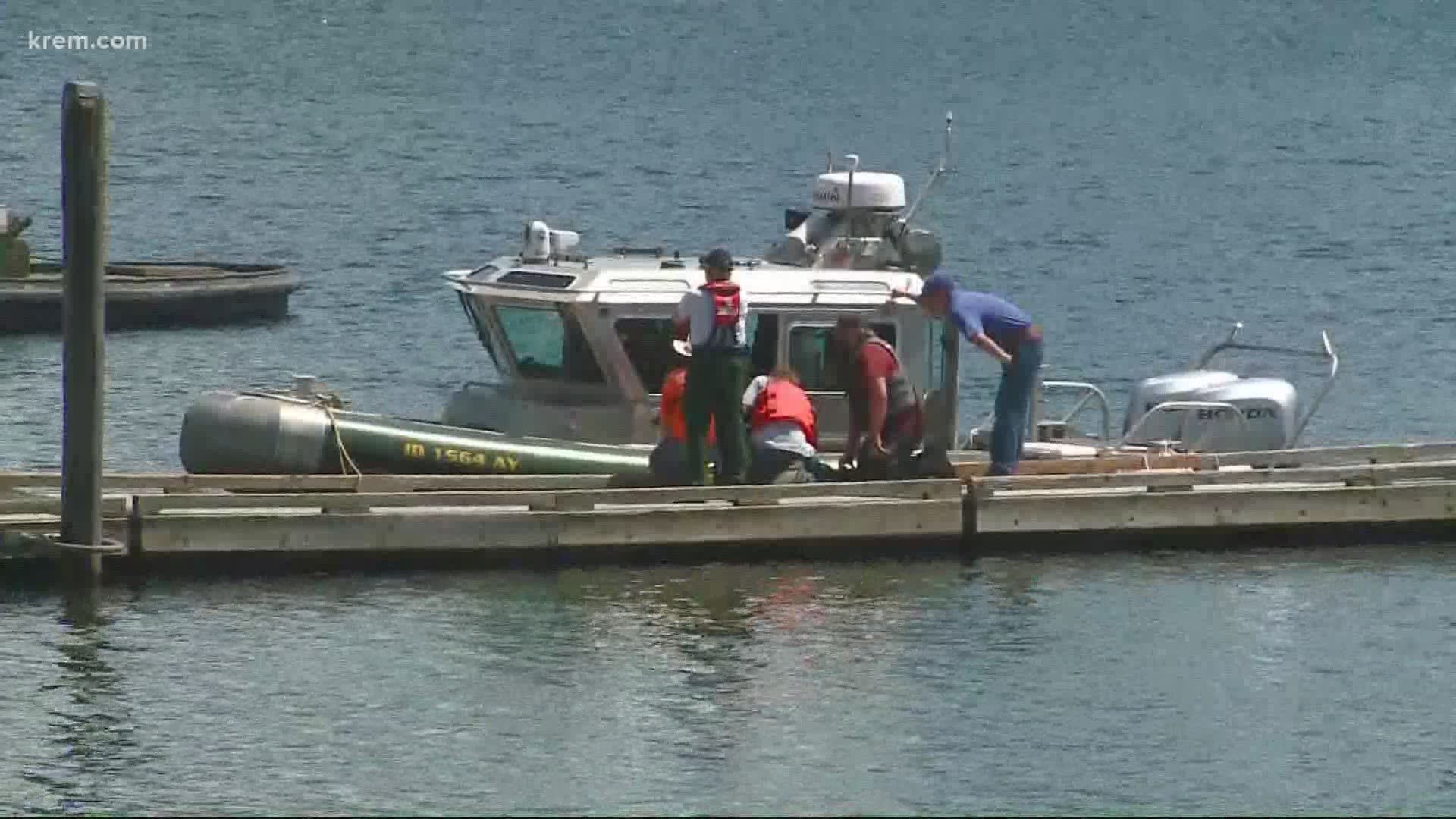 COEUR D'ALENE, Idaho — The second aircraft involved in the deadly plane crash was recovered from the bottom of Lake Coeur d'Alene Friday, according to the Kootenai County Sheriff's Office.

Work to recover the wreckage of two planes that collided in midair above Lake Coeur d'Alene on Sunday could be wrapped up by this weekend, the Kootenai County Sheriff's Office said.

On Thursday night, crews recovered the fuselage of the Cessna 206 and the body of the final victim, according to the KCSO.

On Friday afternoon, KCSO said crews were able to recover most of the sea plane, but there are some parts that the National Transportation Safety Board  would like to see recovered. These include the wings of the Cessna and the pontoons of the sea plane.

The Kootenai County Sheriff’s Office Sonar Team marked the possible locations of the pontoons and wings Friday in the water, according to a press release from the KCSO.

The plane wreckage is expected to be verified Saturday. Once they are verified, the recovery team will retrieve those items and hand the parts off to NTSB to investigate, according to KCSO.

Authorities closed off the Loffs Bay Boat Launch and docks on the western edge of Lake Coeur d'Alene Thursday so crews could launch a large crane on a barge to the crash site. The crane would then hoist the wreckage from the lake floor.

The collision, which occurred between a Cessna airplane and a Coeur d'Alene sightseeing float plane, resulted in the deaths of eight people and a subsequent recovery effort that has taken days. The two planes sank about 100 yards apart not far from Powderhorn Bay.

As of Thursday afternoon, dive teams and the Sheriff's SONAR unit had recovered seven of the eight victims. The body of an eighth victim remained trapped inside the wreckage of the Cessna, authorities said.

"With the last victim being entangled in the airplane, the challenge is to be able to bring that airplane up intact and then not lose the victim from that," said KCSO Captain Stu Miller.

The priority of the sheriff's office, he reiterated, was to recover the final victim in order to bring closure to the victim's family.

Credit: Taylor Viydo/KREM
Crews pull the wreckage of a Cessna 206 that was involved in a mid-air collision over Lake Coeur d'Alene on July 5.

"Our SONAR team has been working nonstop since the planes went down," he said.

According to Miller, recovery crews hoped to wrap up their work and bring up the sunken planes in two days. Several factors would be at play, he explained, including weather. Since the Cessna contained the remaining victim, bringing up that aircraft first would be more of a priority than recovering the float plane.

KCSO said It is unknown what the timeline will be for Saturday or how long this part of the recovery will take.

Debris from the wreckage was spread out roughly 500 feet in diameter. Miller said that the National Transportation Safety Board told the sheriff's office that the agency was hoping to recover at least 80 percent of the wreck.

The sheriff's office was asking boaters to avoid the area just East of Black Rock Bay.

Recovering the final victim will mark the tenth fatality marine deputies have dealt with in the last two weeks. During the last weekend of June, two people drowned in the Spokane River at Corbin Park in Post Falls in unrelated accidents.

During a typical summer, Miller said, deputies may only respond to zero to three fatalities on local waterways.

"For any summer, it's excessive," he said. "But especially to have it this quick is a lot of turmoil in our department, too."

While the department's SONAR team and dive team deputies were somewhat relieved to finally locate the final victims, the experience has remained emotionally challenging, Miller said.

"The toll it takes on recovering that many deceased people in one shot - for the normal person would be devastating. For these police officers, they're doing their job, number one. But at the end of the day, they're just human like everyone else," said Miller.

RELATED: What are challenges of flying over Lake Coeur d'Alene? A pilot offers perspective