Washington state will pay a record-breaking $19.3 million to a 5-year-old at the center of an abuse case. 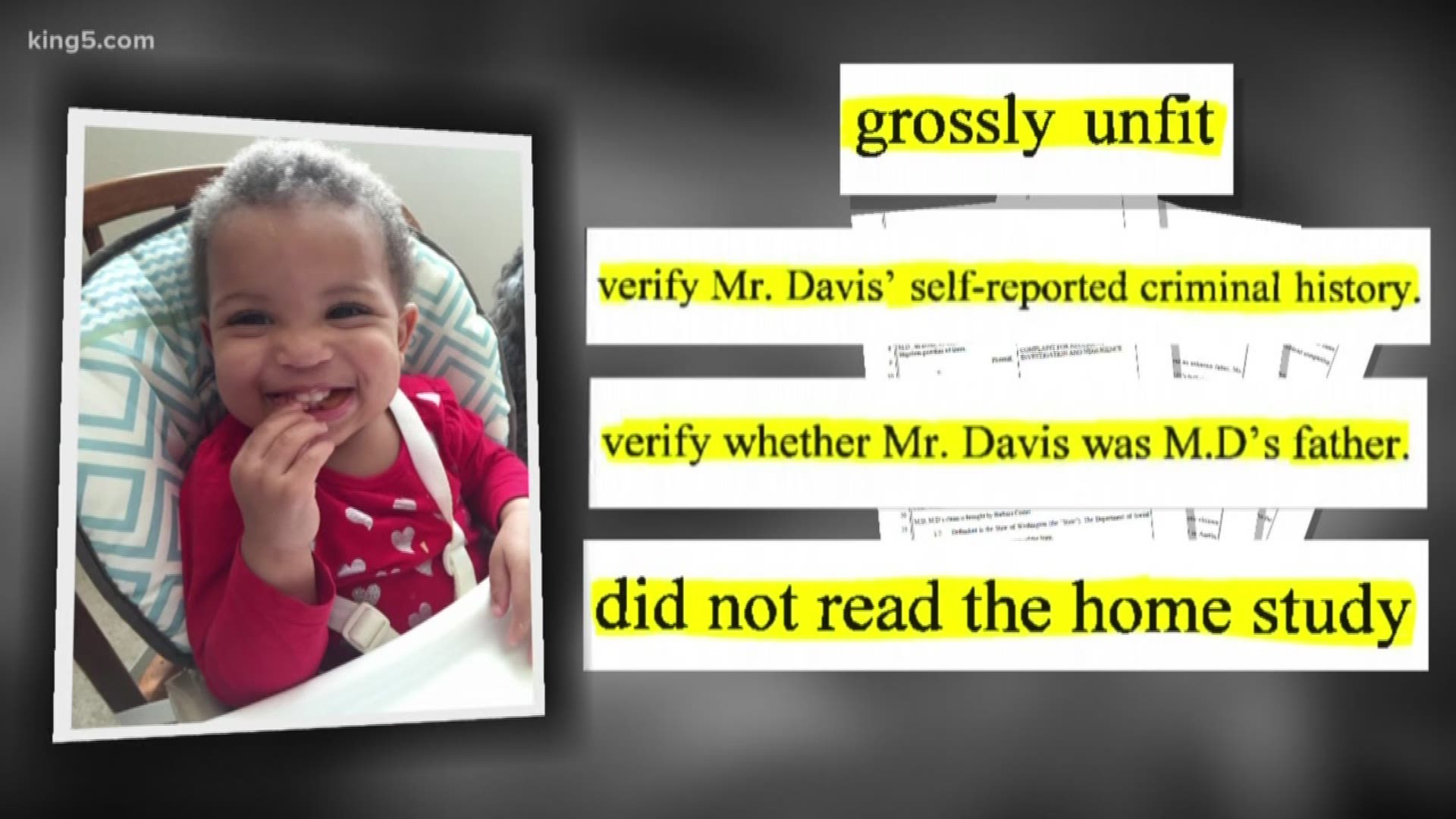 In the spring of 2015, 18-month-old Pierce County toddler, identified as M.D., was a happy, normally developing child being cared for by loving foster parents.

Today at the age of 5, she’s a quadriplegic who doctors say will most likely never walk, talk, or feed herself.

M.D. will receive $19.3 million from the state of Washington as a result of a lawsuit filed in 2017. The suit alleges failures by Department of Social and Health Services (DSHS) social workers led to the girl being ruthlessly beaten by a man claiming to be her father.

The amount M.D. will receive is record-breaking. It is more than double what DSHS had paid out in the past to a single plaintiff.

M.D. entered the foster care system as an infant. When she was 8 months old, M.D. was placed with licensed foster care parents who said they were interested in adopting the little girl and her half-sister.

Instead, DSHS social workers asked a child welfare judge to place her with her alleged biological father, Bryant Davis, and his wife in Austin, Texas.

According to the suit filed on behalf of M.D. by her Seattle attorney Timothy Tesh, DSHS never followed through on a court-ordered paternity test or a parenting assessment.

State social workers, according to the suit, also failed to verify Davis’ criminal history or to read a home study carried out by social workers in Texas that would have exposed red flags such as convictions for assaulting a family member in 2014, and manufacturing and selling drugs in 2013.

The 2013 drug conviction would have disqualified Davis from being a placement option.

“This little girl was utterly failed by DSHS, the very agency charged with protecting her,” said Tesh. “By ignoring serious warning signs that should have resulted in M.D. remaining in a loving foster home, M.D. was instead flown to Texas where she was placed with a man who was both a felon and a convicted domestic abuser. DSHS knew this and yet placed M.D. there anyway.”

According to legal documents, on July 9, 2015, Davis called 911 from his Austin home to report that M.D. was having a seizure. She arrived at the hospital with 16 fractured ribs, liver and spleen lacerations, a brain bleed, and facial bruising. The child suffered a heart attack at the hospital as well.

Davis told Austin police that he had punched and spanked the child for going to the bathroom on the living room floor. According to police documents, Davis had slammed M.D.’s head against the toilet and then continued the beating in the living room.

“The tragic results (of this placement) were predictable and preventable,” said Tesh.

The state agency that assumed responsibilities for child welfare programs from DSHS in July is the newly formed Department of Children, Youth and Families (DCYF).

“The irrevocable harm done to this child is devastating and heart-breaking,” said Ross Hunter, Secretary of DCYF in a statement. “This settlement ensures the child receives the quality care she needs for the duration of her life.”

On October 19, M.D. turned 5 years old. She is currently living in Eastern, Washington and continues to be a ward of the state, although Tesh said will most likely soon have a guardian. The beating left her with quadriplegia, and profound impairment in her vision, feeding ability, communication skills, and cognition.

“DSHS knew, or should have known, that Mr. Davis was grossly unfit to be a caregiver for M.D.,” Tesh wrote in the lawsuit. “DSHS breached this duty by failing to conduct a reasonable investigation of Mr. Davis.”

Davis is serving a 23-year prison sentence in Texas in connection with the beating.

Secretary Hunter said in the DCYF statement that the agency will learn from the case.

“We understand that we cannot prevent every tragedy, but we can do a better job of reducing the number of them that happen under our watch. DCYF was created to better support at-risk families and reduce the risk of harm to children. Under my leadership, DCYF’s commitment is to provide the highest standards of care for this child and all children in our care,” said Hunter.