Here's what happened at the protests in Portland this week

From the mayor's appearance to the Wall of Moms, a lot has happened this week. Pat Dooris looks back at what's been happening at the federal courthouse. 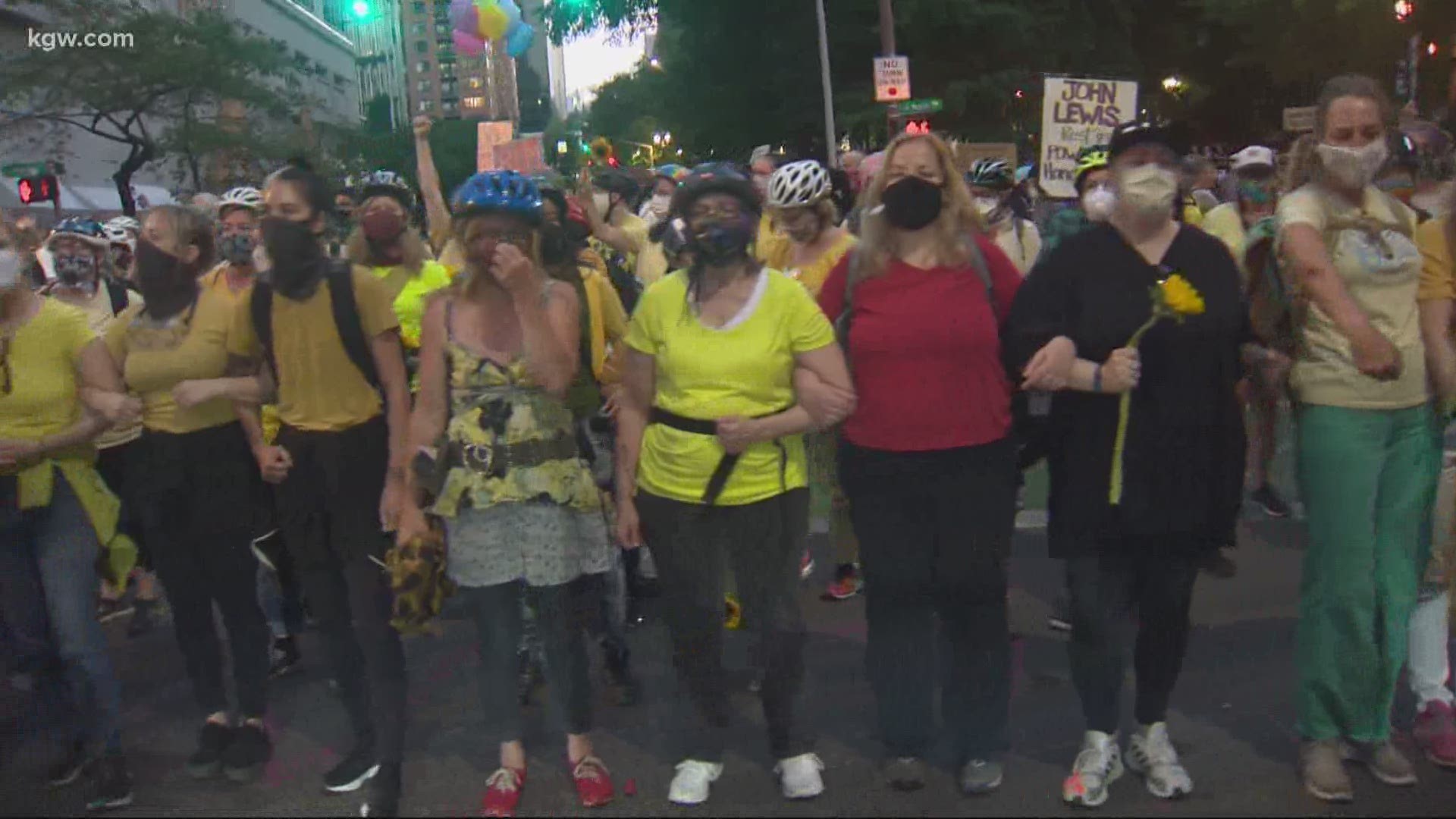 PORTLAND, Ore. — It’s the end of a long week. Here’s a look back at what happened with the protests in Portland.

Last Saturday, July 18, we watched as moms in yellow shirts marched downtown to the federal courthouse.

They joined the protest against federal agents protecting the courthouse and more broadly against President Trump who sent them there.

Later that night, federal officers pummeled Navy veteran Chris David as he stood in the street near the courthouse, something a federal oversight agency is now investigating.

"I had no intention of leaving until I had to," David said. "And I wanted to show that I was not doing anything provocative or aggressive. I was just standing there with my arms by my side - that's all I was doing," he added.

That same night in North Portland some demonstrators set fire to the police union building, bringing an angry response from the union leader Sunday.

Community leader and pastor Matt Henessee spoke out directly to those using violence.

"If you want to make change, if you're serious about change, then I’m begging you as a citizen of this city for the last 32 years, I’m asking you to put down your need for violence and meet us - have a moratorium," said Henessey.

But there was no moratorium.

Sunday night, protesters gathered at the federal courthouse again, in even bigger numbers.

As the night wore on and peaceful protesters left, demonstrators tore down the fence put up around the courthouse and moved toward the front of the buildings. Federal officers used tear gas and other munitions to push them back. It happened several times over the next few hours, according to police.

On Monday morning, business owners in downtown talked openly about the city's core dying as a result of homeless issues then the pandemic and now the turmoil.

Phil Tobin, owner of H&B Jewelry and Loan, was asked if he thinks downtown Portland could survive if the nightly clashes continue.

"Look," he answered. "Everything’s boarded up. There's no one downtown."

His store has now been broken into and ransacked three times since the protests began.

"I think this is a massive failure of government," said Henrik Sharples, who owns an antiques and collectibles business.

President Trump praised the federal officers in a news conference on Monday.

On Monday afternoon authorities took down the fence around the federal courthouse. That night, large numbers of protesters gathered there again.

One video captured members of the crowd shoving an officer off someone they were trying to arrest. As another officer ran to help, at least one of them pulled their gun and pointed it at the crowd.

A rotated version of the clip from earlier of protesters dearresting a comrade that a fed went after. pic.twitter.com/IWpDJZHeVj

"We see them planning their attacks. And yet the city of Portland takes little action to stop or disperse this crowd," he said.

But Oregon Sen. Ron Wyden pushed back, accusing President Trump of being out of control.

"This kind of abusive exercise of power by a rogue president would've horrified our founding fathers," he said.

On Tuesday night, at least 2,000 people again gathered at the federal courthouse. Late in the night some tried to break into the courthouse and there were multiple confrontations between demonstrators and federal officers.
Seven were arrested.

On Wednesday, a judge began hearing arguments brought by Oregon’s attorney general trying to restrict the actions of the federal officers.

Later that night Portland Mayor Ted Wheeler attended the protest. He used a microphone and speaker to address the crowd, which often booed his comments.

"We are at the front line here in Portland. If we are not able to get the federal administration to back off and leave our city, it'll happen all across the United States, jeopardizing our United States constitution,” said Wheeler.

He later felt the effects of tear gas along with everyone else standing near the newly erected fence at the courthouse. Six people were arrested.

On Thursday, protester Mac Smiff explained what rallying against federal officers had to do with social justice.

"Absolutely. Without a doubt. I can't imagine wanting to keep our business here," said Stacey Gibson, who owns a Subway franchise downtown. "Our lease is up in a year and I don't know why we would stay."

On Thursday night, there were more confrontations between demonstrators and federal officers at the courthouse.

RELATED: 'This is just mindless violence': US Attorney for Oregon critical of local leaders response to protests