Rallies continued Thursday across western Washington over the death of George Floyd in Minneapolis police custody. 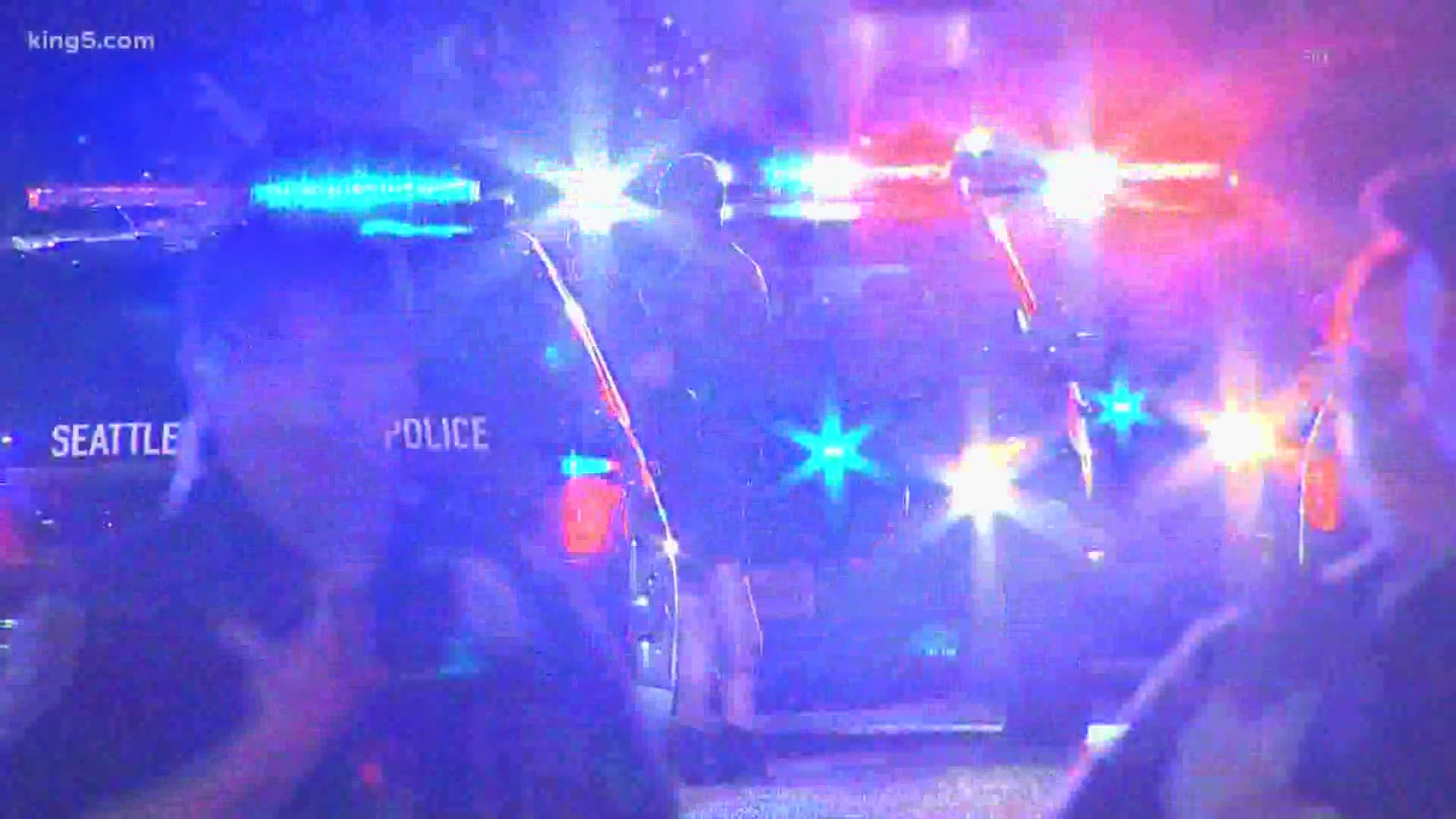 SEATTLE — Protests the over death of George Floyd, a black man killed in Minneapolis police custody, continued across Puget Sound for the seventh consecutive night on Thursday.

Demonstrations remained mostly peaceful. Large crowds first convened on Seattle's Capitol Hill in the afternoon and continued their rally into the evening.

Officers sometimes wear bands over badges to honor colleagues who have been killed while on duty. Mayor Jenny Durkan said authorities continue to speak to community leaders about ways to reduce tensions and improve communication and police policies.

Also on Thursday, the largest labor union in Seattle demanded that the Seattle Police Officers Guild admit racism is a problem in law enforcement and agree to address it or face being thrown out of the umbrella organization.

Updates from Thursday into Friday morning:

Protesters remained on Capitol Hill overnight into Friday morning. The demonstration remained mostly peaceful overnight except for some minor incidents during the early morning hours.

Tacoma Mayor Victoria Woodards delivered a press briefing on the death of Manual Ellis while in Tacoma police custody. 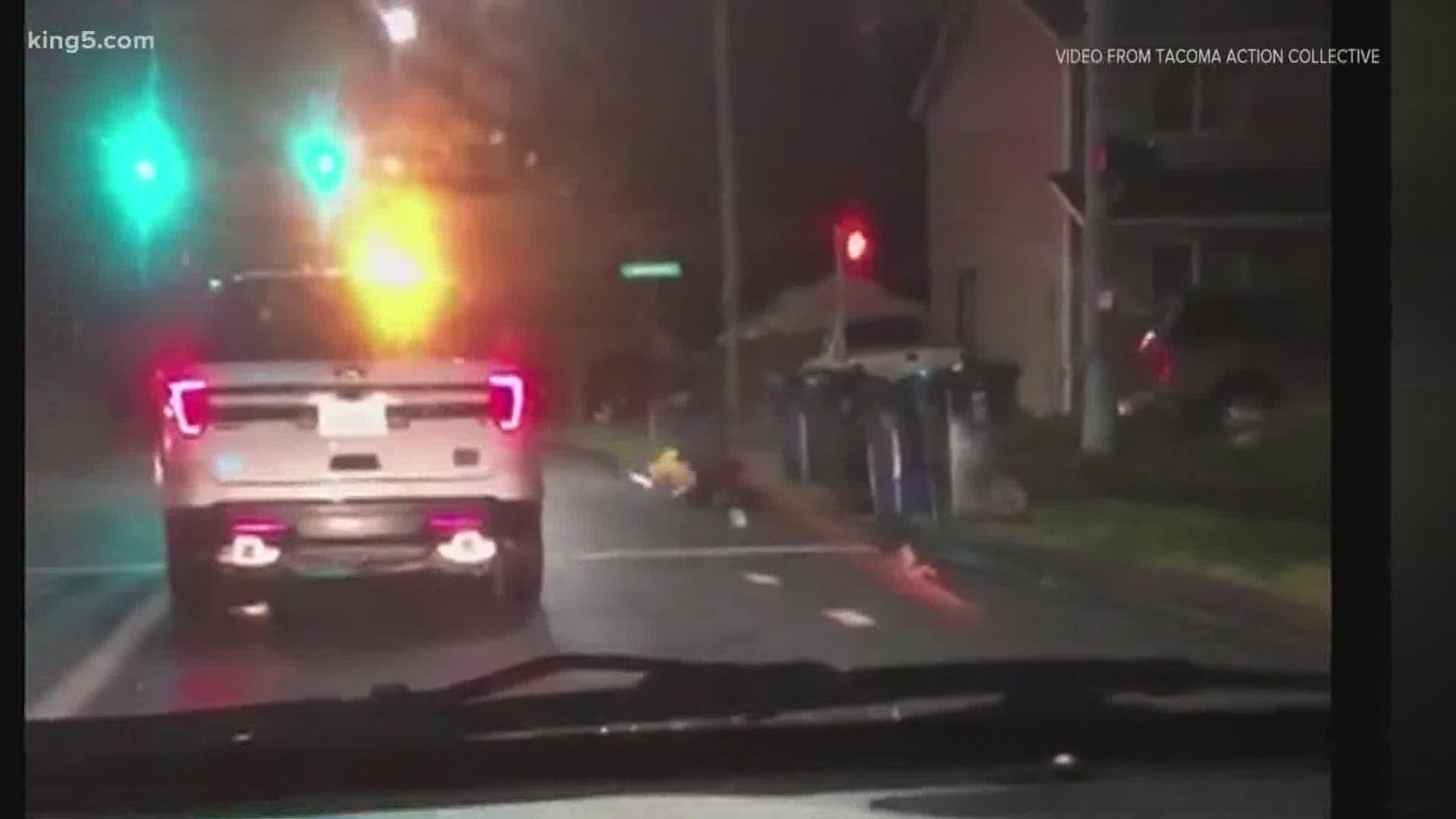 The Bellevue Police Department is asking for witness footage of looting. Demonstrations turned to property damage and store looting on Sunday. The department issued the following update on its website:

"To simplify the process, we have created a dedicated site to upload pictures and videos. Please use this link to send us your media Tip Line – Looting Media. You can also find the link on our website when you click on ‘Report a Crime Online.’ An officer may contact you if they need more information.

If you have already emailed us, we are processing that video, and there is no need to upload it again. This portal is for witness video; we will have a dedicated site for affected businesses to report crime shortly. We appreciate your efforts and support as we investigate these crimes and arrest those responsible to justice."

A large crowd is gathered at 11th and Pine in Seattle's Capitol Hill for a peaceful rally over the death of George Floyd. Follow Brit Moorer for live tweets.

Organizers of a peaceful rally in Seattle spoke with KING 5 on Thursday about the real message of the demonstrations. 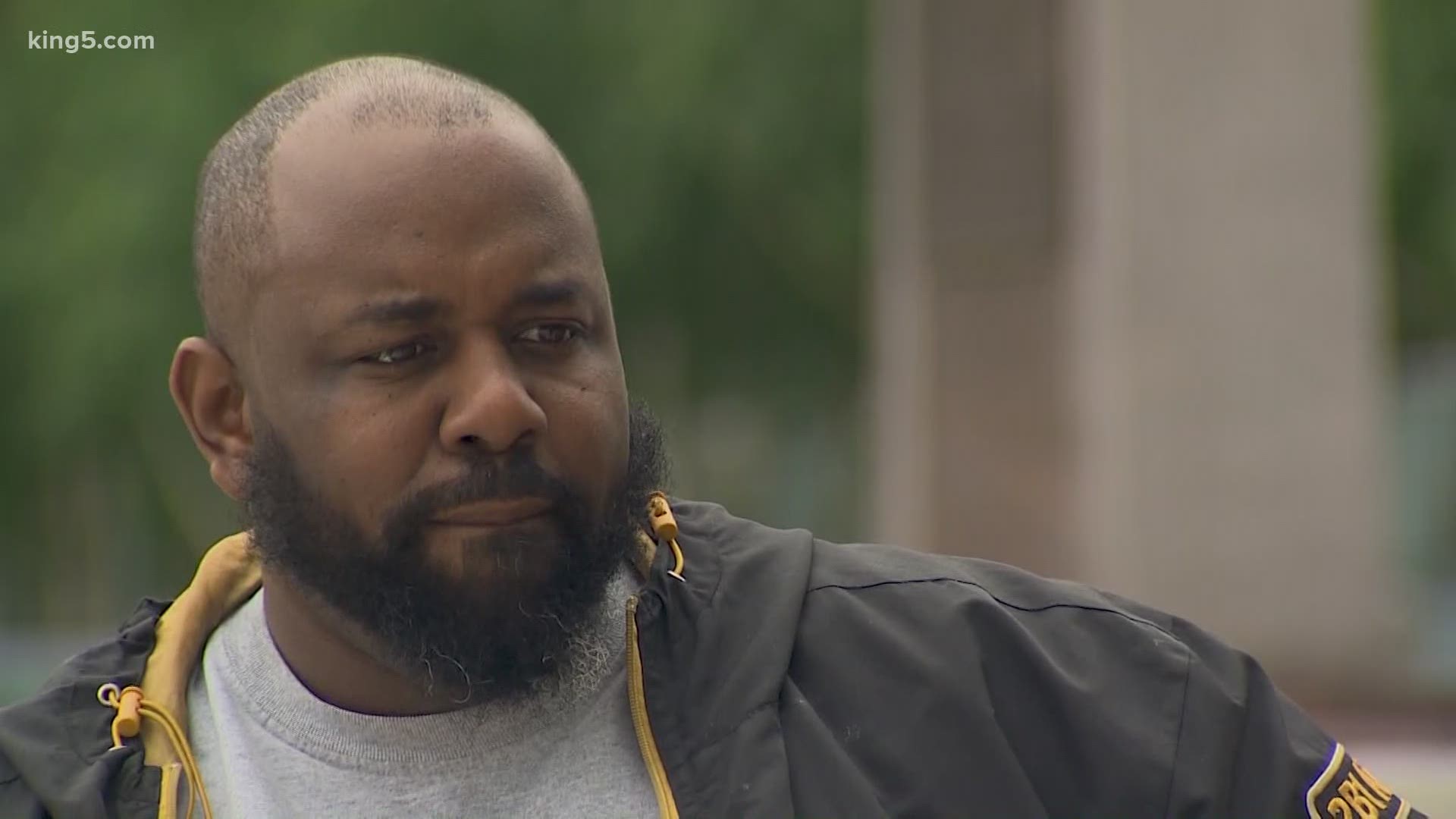 Effective immediately, all officers will have their badge numbers prominently displayed.

Therefore, when donning a mourning band, it must be placed horizontally so that your badge number is not obscured.

Exception: This does not apply to mourning badges purchased through the Seattle Police Foundation that already have the serial number displayed."

The Associated Press reports the family of a Tacoma man who died after police restrained him in March are calling for the four officers involved to be fired and arrested after the Pierce County Medical Examiner ruled his death as a homicide.

Watch aerials over the 7th night of protests in downtown Seattle:

People have gathered for the 7th night in Seattle to protest the death of George Floyd. As of 5 p.m., a large group of protesters has gathered near 11th and Pine Street in Seattle. 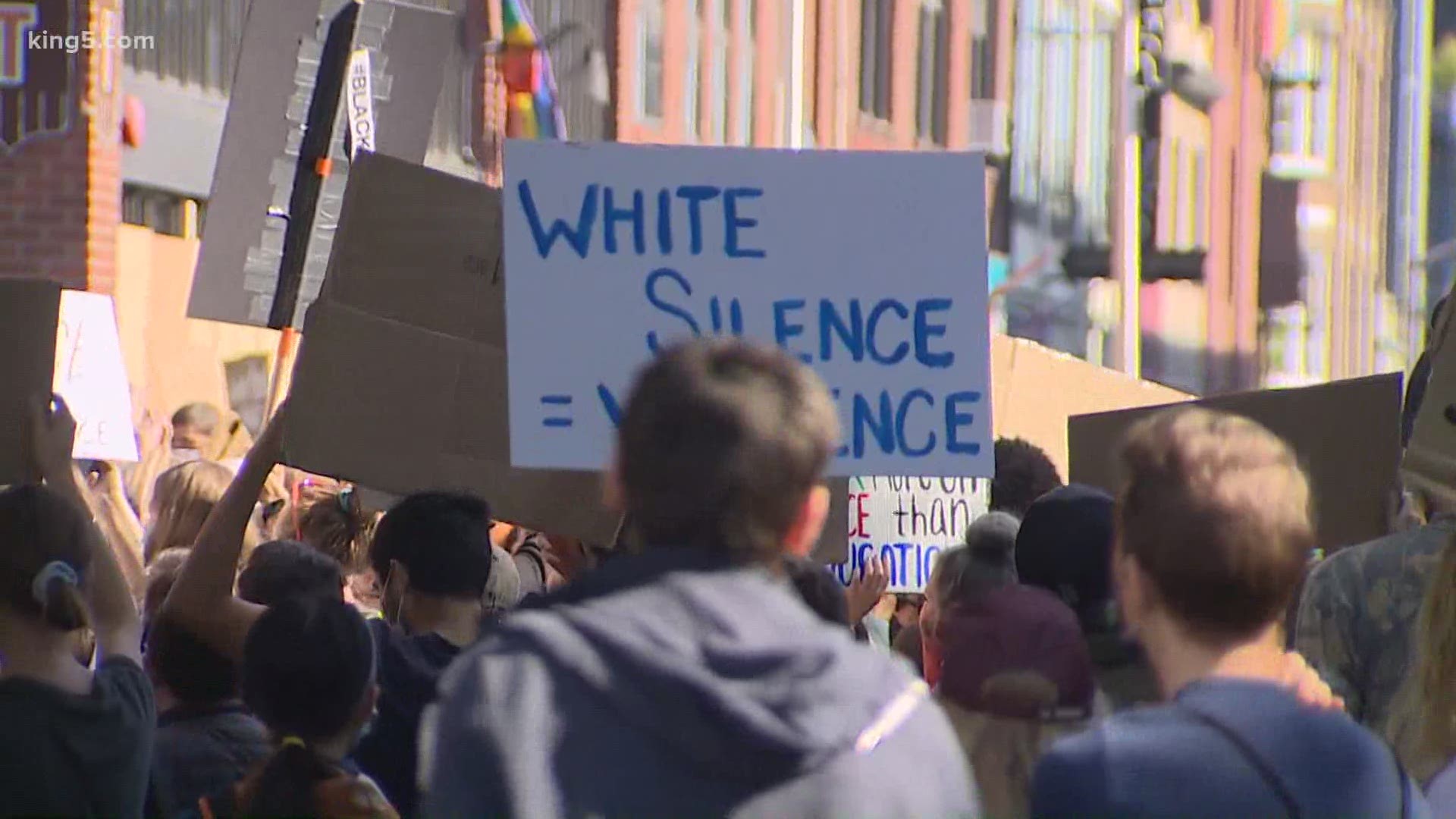 The City of Bellevue has ended its mandatory curfew, one day after Seattle also announced their curfew had been terminated. Bellevue officials released the following statement Thursday:

"Mayor Lynne Robinson has terminated an emergency order for overnight curfews for downtown Bellevue through Saturday morning. The city will return to daily risk assessments to determine the need to institute further measures for public safety. No curfew is planned for the night of June 4.

A civil emergency is in effect for Bellevue, as declared by the mayor on Sunday, May 31. A further civil emergency order also remains in place related to prohibited items in the downtown area. The order prohibits possession of weapons, with the exception of firearms, with intent to cause harm downtown and in other commercial areas in Bellevue (map). The order limits the discharge of firearms in these areas, consistent with the constitutional right to defend oneself or others.

The National Guard is still present in Bellevue and Bellevue Police continue to work with regional partners to ensure agencies are able to support each other as needed during this time. In addition, state police chiefs are sharing information to ensure they are working with the latest collective information to make public safety decisions."

In response to community activists earlier in the week demanding that police officer's badge numbers be visible, Seattle Police Chief Carmen Best announced Thursday she's issuing a special order to require all officers to have their badge numbers prominently displayed.

Some officers wear a patch or band over their badge to honor fallen officers, but protesters have been critical that it prevents them from knowing the officers they're dealing with.

Chief Best says her department is continuing to go through the other demands from protest leaders.

"We received a list of concerns from the demonstrators, and we are reviewing each and every one of them," said Best.

“I am grateful that our city remained peaceful throughout the night,” said Durkan. “That must remain our goal. We want there to be peace and safety both for those coming together to speak out and for our police department.”

Scoggins ended the press conference Thursday by encouraging people participating in protests to wear face masks to help prevent the spread of COVID-19.

The Washington State Department of Transportation (WSDOT) says it's closing I-5 express lanes in downtown Seattle in order to keep people safe during the ongoing demonstrations in the city.

Lanes of I-5 have had to be closed multiple times since last Friday due to protesters marching onto the freeway or getting near it and causing concern.

WSDOT says going forward, the I-5 express lanes will close at 11 a.m. on weekdays and 1 p.m. on weekends at the request of the Washington State Patrol.

Drivers should also plan for the possibility of I-5 being closed completely between SR 520 and I-90 during demonstrations, should protesters approach the freeway.

Check the Seattle traffic page and follow WSDOT on Twitter for the latest real-time traffic information before you head out the door, and tune into local radio for current road closures and incidents while driving.