"Mayor Durkan concluded the situation could only be deescalated between officers and demonstrators by removing the barriers," read a statement Thursday evening. 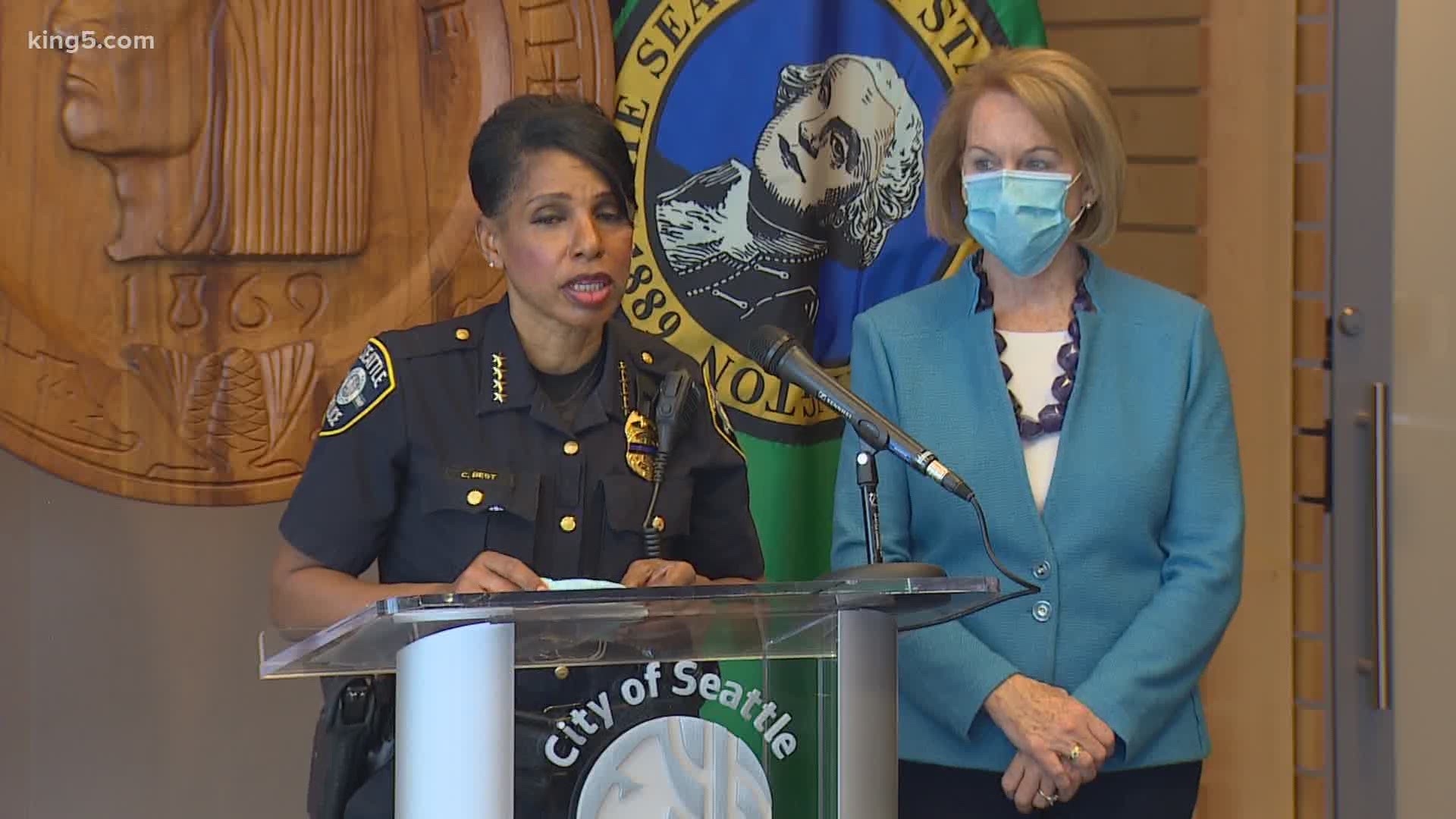 SEATTLE — The office of Seattle Mayor Jenny Durkan released a statement Thursday evening saying it was her decision to remove the barriers around the Seattle Police Department's East Precinct in Capitol Hill.

The statement comes after KING 5 reporters questioned Mayor Durkan and Seattle Police Chief Carmen Best during a Thursday afternoon press conference about who made the decision to take down the barriers.

"Over the last week, Mayor Durkan requested that Chief Best have SPD prepare a range of operational plans to respond to the protests on Capitol Hill and the continuing public safety issues. On a daily basis, SPD adjusted its tactics trying to reduce conflict points," read a statement from Stephanie Formas, Mayor Durkan's chief of staff. "After events Sunday night, it was clear that the situation needed to be significantly defused and de-escalated. The cycle of conflict between demonstrators and officers was harmful to residents, demonstrators, businesses, officers, our city, and the opportunity to make real progress with the community. On Monday, Mayor Durkan concluded the situation could only be deescalated between officers and demonstrators by removing the barriers. After long consultations with Chief Best and SPD, on how to do so in a safe manner, the Mayor directed free access to Pine Street for peaceful demonstrations Monday evening."

The question was raised because earlier Thursday morning, Chief Best said the police department's East Precinct in the Capitol Hill neighborhood was closed after the city caved to "severe public pressure."

The decision to withdraw from the precinct during the ongoing George Floyd protests was not her decision, Chief Best explained in a YouTube video published Thursday.

"I'm angry about how all this came about," Chief Best said in the video.

The department had "solid information" that led them to believe anti-government groups would destroy the precinct, Chief Best said. Seattle Fire was "nearby" to protect the precinct and the residential block from the "real risk" of a fire.

Seattle City Council Public Safety Chair Lisa Herbold said there is history in the city to negotiate over disputed property. She believes the current situation, and the decision to take down barriers, has been a de-escalation of tension between police and protestors. But, she added, the current situation can’t remain permanent.

"We’ve got to start to begin the process," Herbold told KING5. "I don’t believe the situation as it is can go on forever."

The streets outside the Seattle Police East Precinct was the site of a number of clashes between protesters and police in the past two weeks.

Over the weekend, officers used tear gas to disperse demonstrators in the area after they said they were assaulted with projectiles. Seattle City Council members said police overreacted.

Nollette said police have seen checkpoints where people are armed. There have also been reports of people asking for identification and that a business was told they needed to "make a donation" to continue to operate.

Chief Best said they have "heard there are armed people patrolling" the area of 12th Avenue and Pine Street. Additionally, police received a report that "armed people may be demanding payment from business owners in exchange" for protection and demanding identification from people who live in the area.