Chief Carmen Best says it is taking on average 18 minutes for officers to get to emergency calls, and that is one of the reasons why she wants the precinct reopened. 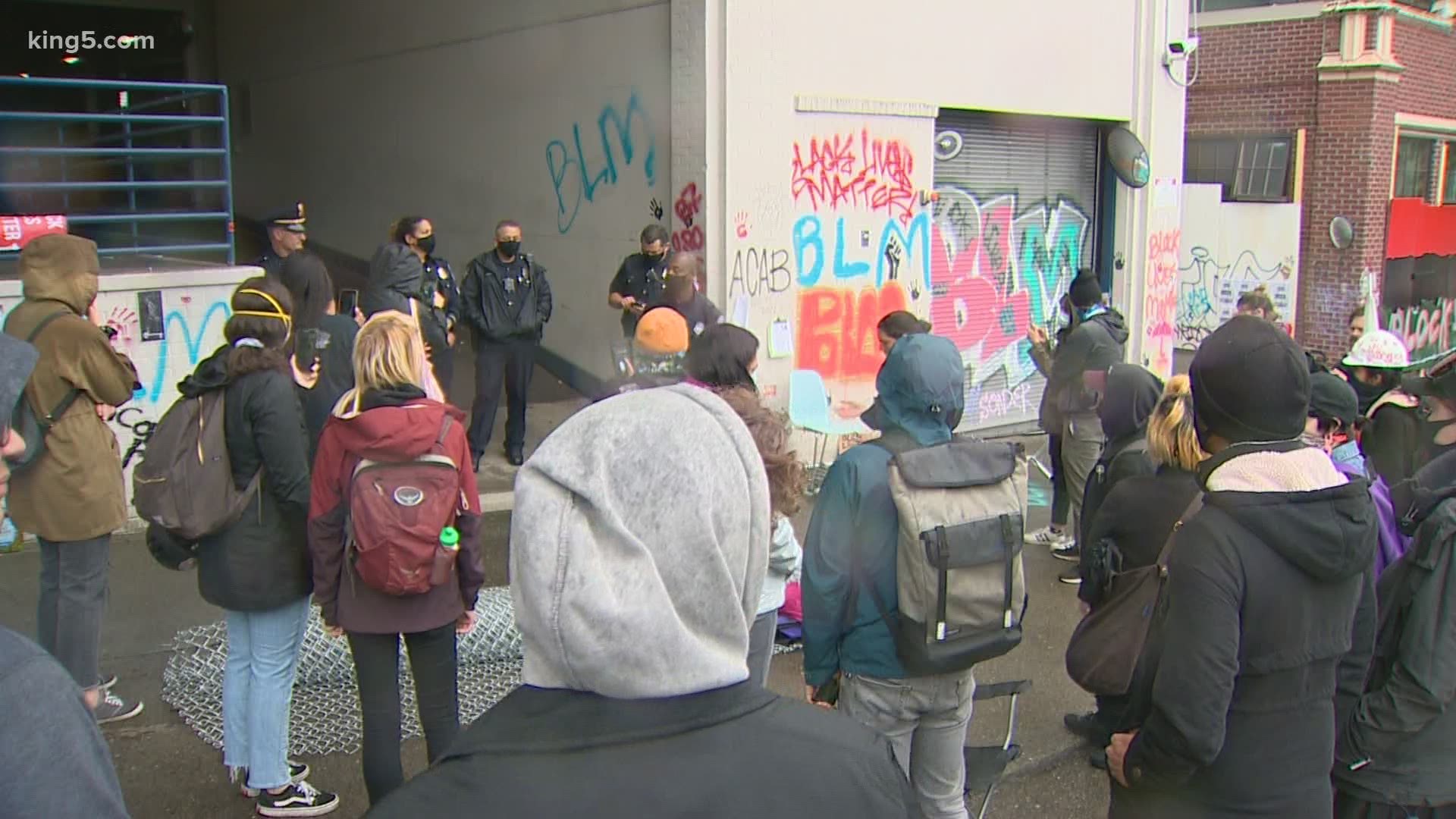 SEATTLE — Protesters continue to gather in what some are calling the Capitol Hill Autonomous Zone. It stretches across several blocks in the neighborhood. But not all protesters agree with the name.

One protester said the sign welcoming people to the 'Capitol Hill Autonomous Zone' was taken down because not everyone agrees with that message. It highlights the fact that there is no official leader for the group that has gathered and set up tents for the last few days in front of the Seattle Police Department's East Precinct.

Seattle police report since the East Precinct closed, 911 response times have tripled. Police Chief Carmen Best says it is taking on average 18 minutes for officers to get to emergency calls, and that is one of the reasons why she wants the precinct reopened.

As Chief Best entered the boarded up precinct building on Thursday morning, people were shouting at her. She did talk with protesters briefly, but protesters said it was not long enough to hear all of their concerns about racism and police brutality.

Maurice Cola is one of the protesters, and he says over the last few days demonstrations have been peaceful. He does acknowledge they have blocked roads.

"We've had people threatening us and people who fired upon us," said Cola, referencing the man who drove into a crowd of protesters, then shot and wounded one man on Sunday.

"We are not just stopping people from coming through," Cola continued. "We just made sure that people who were coming through are aware that this is what this is, and if you could, it would be more effective to go around."

Chief Best says the blocked roads are a safety concern.

When asked how long people will be allowed to stay on the street, Chief Best said at this moment, "We are not going to try to deal with that. I just want to look at the building. I actually just came into the building to look around to see what damage was in here."

Chief Best wants to bring officers back to the East Precinct, but for now, it's the protesters who are here with their message.

"What people are doing is working through the trauma from being terrorized by the police department," one protester said.

Another protester said, "We want change for everything that is not fair out here, and there's a lot of it. We want change starting with police brutality."

Protesters are calling for a dialogue with officers about the inequities that they have seen.

It was so frustrating for one protester, he broke down and tears, and he was comforted by Seattle Police Acting Sergeant Martin Welte.

"It's okay, I understand I really do," Welte said. "I am a 57-year-old man of color who has worked for the police department for 30 years, so I know."