On Sunday, barricades in the Capitol Hill Organized Protest zone (CHOP, formerly known as CHAZ) were supposed to be taken down, but they still remain. 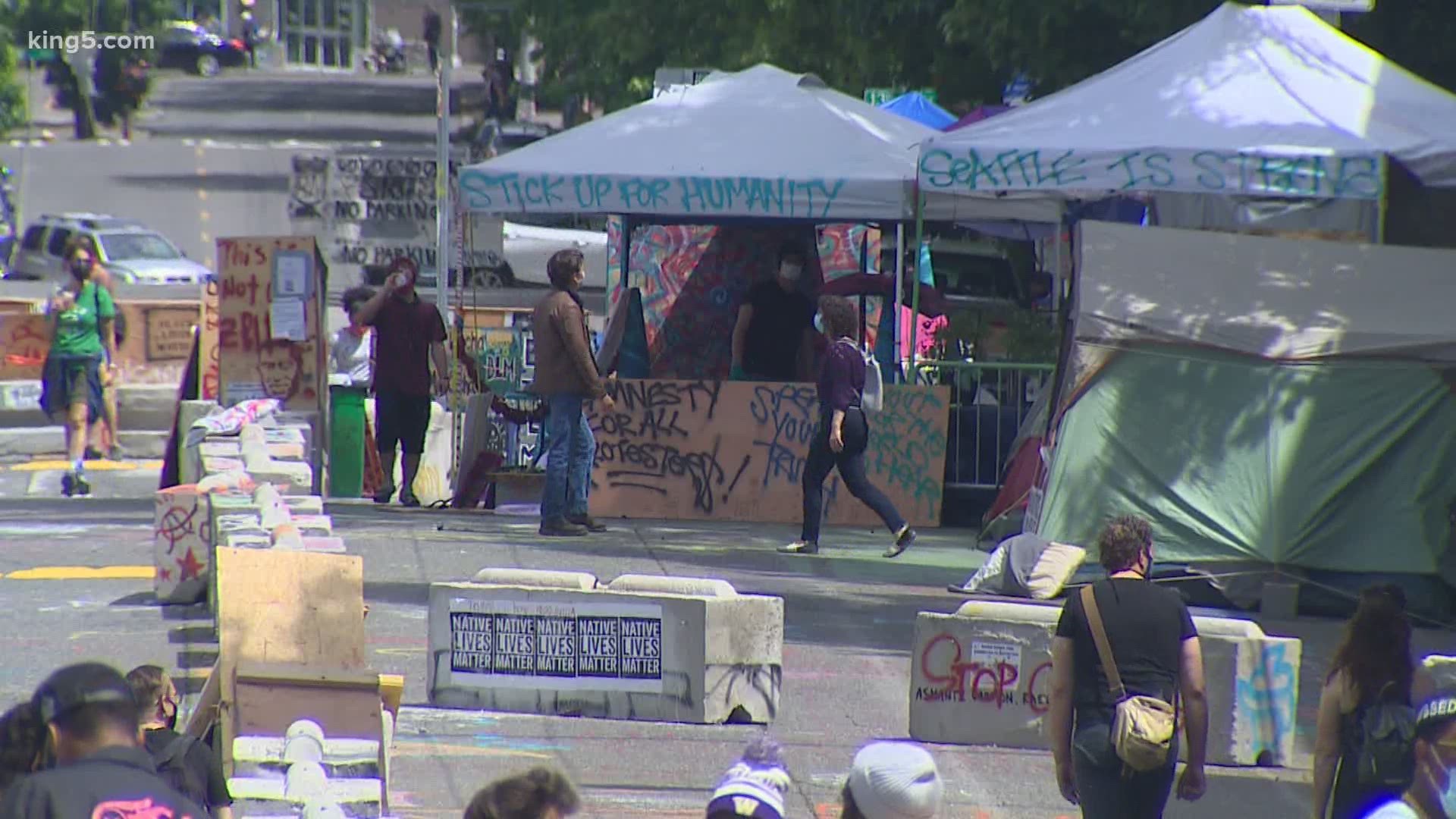 SEATTLE — Seattle Mayor Jenny Durkan said the barricades around the Capitol Hill Organized Protest (CHOP) zone would come down on Sunday morning, but so far, the barriers are still standing.

Some barricades will remain around the East Precinct police station, where demonstrators plan to continue to protest.

The mayor met with CHOP organizers following a tense morning Friday when protesters blocked Seattle Department of Transporation (SDOT) crews from moving into the CHOP area. The crews were staging construction equipment near the barriers, including several trucks and front end loaders.

RELATED: Seattle protesters: We are here to dismantle systemic racism

While the equipment was staged, at least one protester lay in the street on 12th Avenue to prevent the front end loader from moving forward. On SkyKING aerials, a line of SDOT trucks were seen lined up along 12th Avenue outside the CHOP barricade. 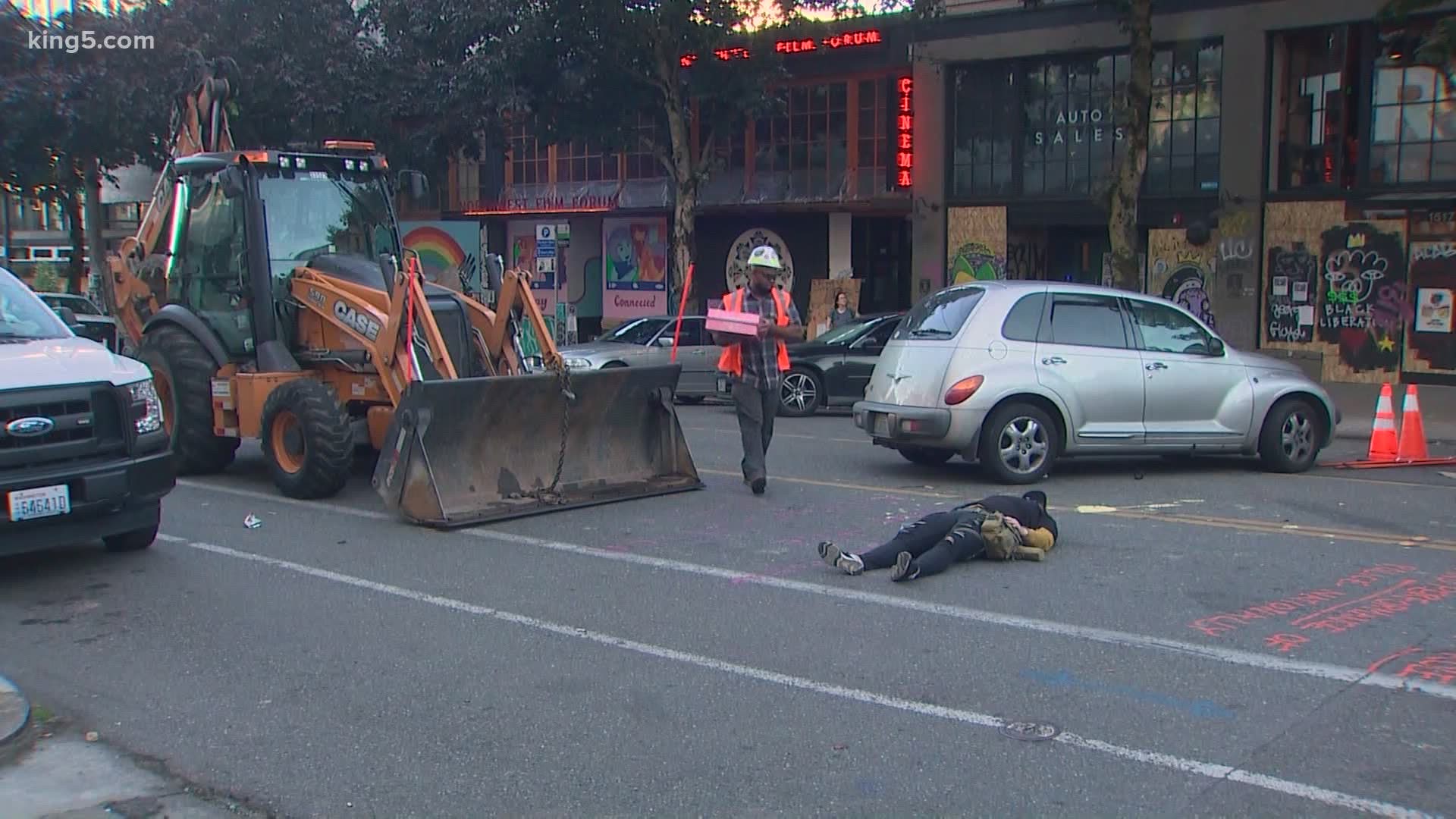 Durkan said in a statement issued Friday that the city met with organizers and with ministers to "discuss the restoration of the Capitol Hill area and long-term changes to transform policing.

She said the goal is to balance the protesters' First Amendment rights and the public safety of the residents and businesses. The city also said it has provided resources for people who need access to COVID-19 testing, medical care or shelter.

"The Mayor suggested a series of steps that she believes can be taken in the coming days, including the removal of the barriers to create more access," her officer said in the statement. "She also believes in the planning for some of the long term changes to Cal Anderson [Park] including art installations and the community garden."

Durkan said last week that police will begin returning to the East Precinct in the CHOP, although a timeline wasn't provided. 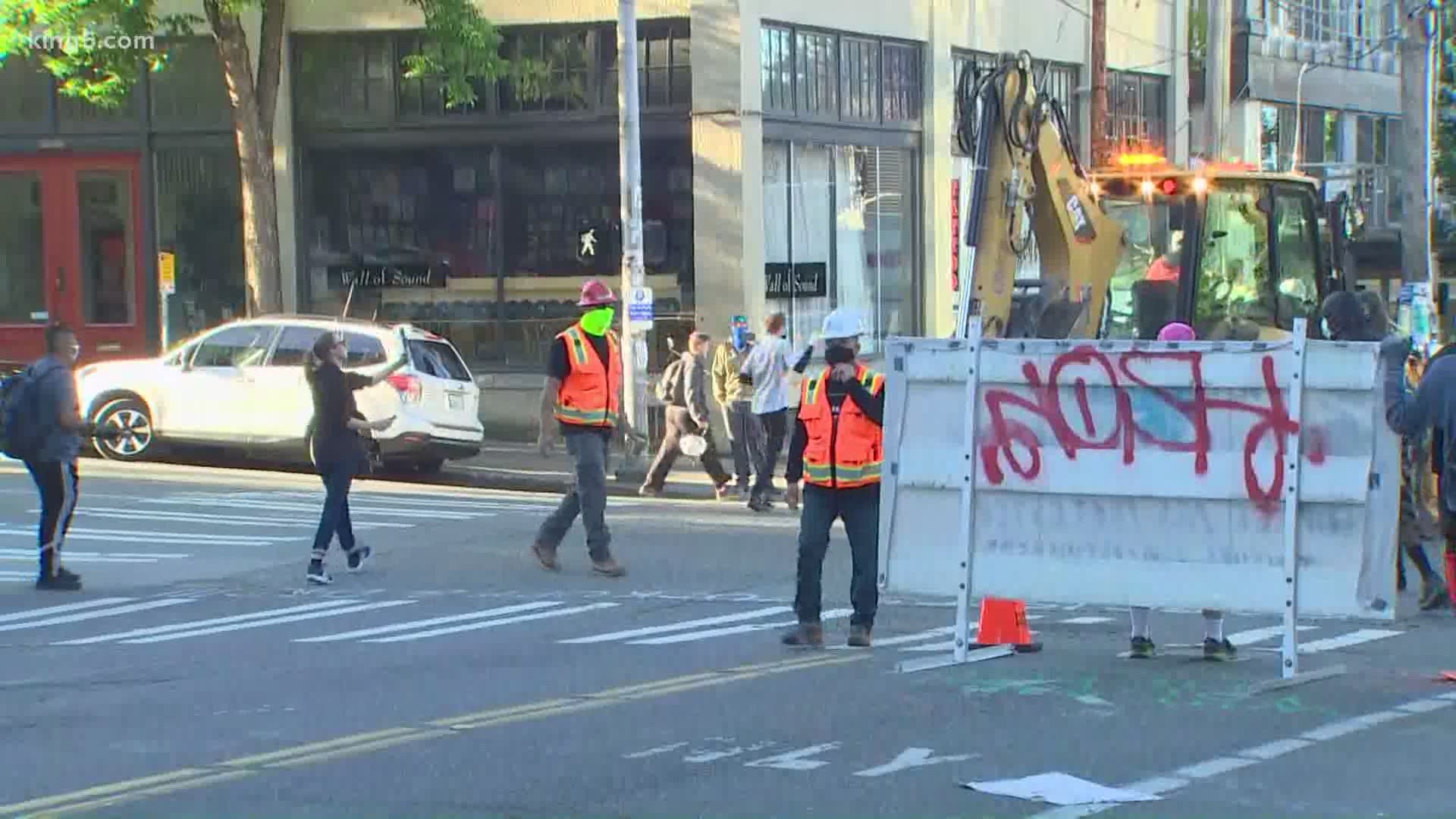 The spokesperson said city staff had planned to remove some barriers blocking the roadway and clean up Cal Anderson Park. The city also planned to deploy social services to offer shelter to the homeless who were living in the park.

"Once this work commenced to remove some of the barriers blocking roadways, City workers were met with significant resistance by protesters, who grew increasingly agitated and aggressive towards City workers from SPR, SDOT and SPU," the spokesperson said in a statement.

A group known as Black Collective Voices said they will continue to hold space in the CHOP if the people choose to do so.

David Lewis, one of the CHOP organizers, said Friday the city will give organizers 72 hours to confer with demonstrators before the barriers are moved.

"We have heard them in recognizing that some of the establishments are wanting more through traffic," said Lewis. "We get it. We want to work with the city, but we require that our demands are met."

Some of those demands include defunding the police department by 50% and reallocating funds to disadvantaged communities and terminating police officers with charges against them. 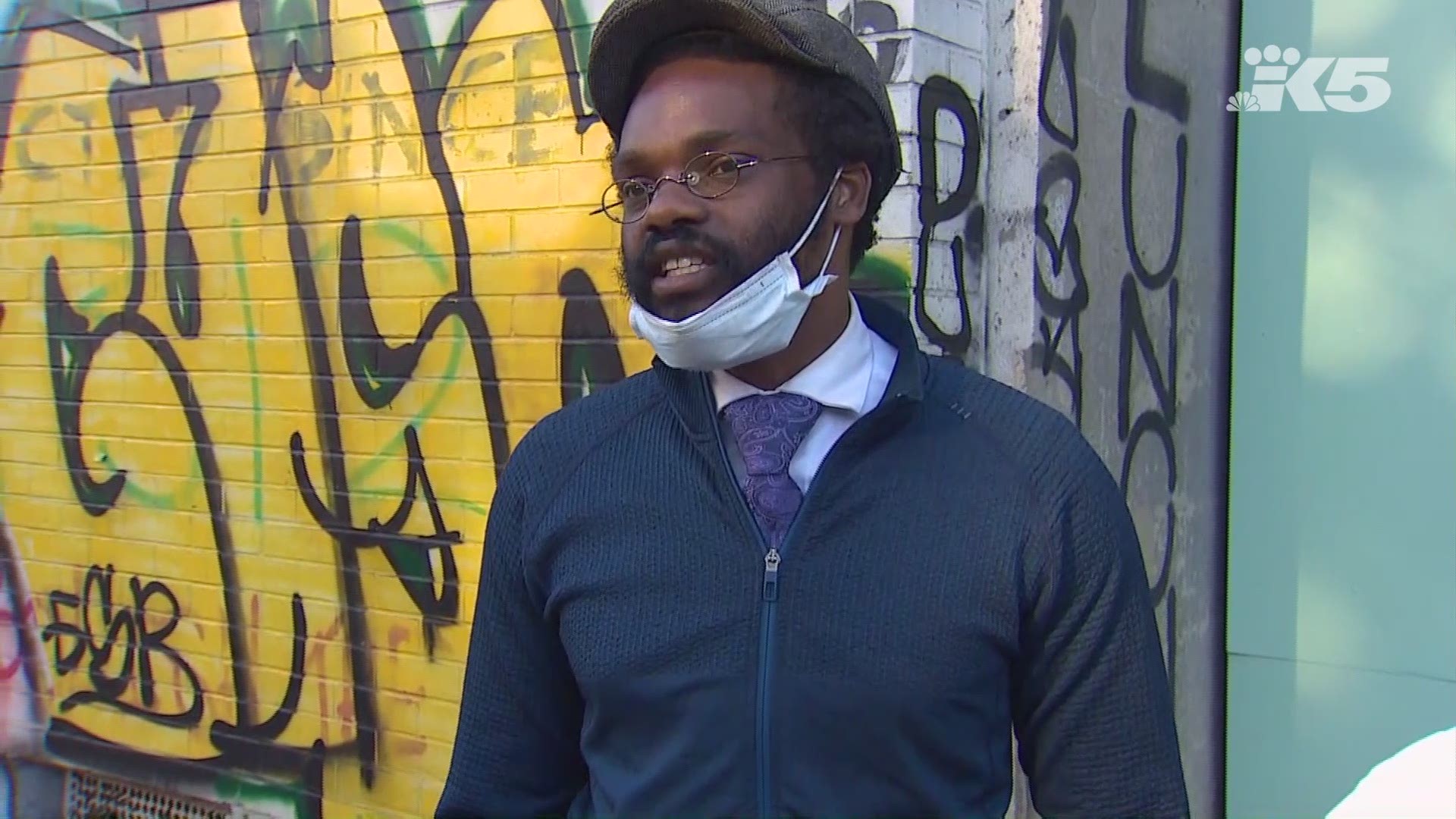 RELATED: Crowd, chaos, protest and police - Suddenly, I was living in the CHOP

Another video posted to social media shows protesters on the steps of the SPD West Precinct talking about their frustrations with police violence. The group talked about issues like the new youth justice center in King County. The group chanted and left candles and flowers outside the doors of the precinct. 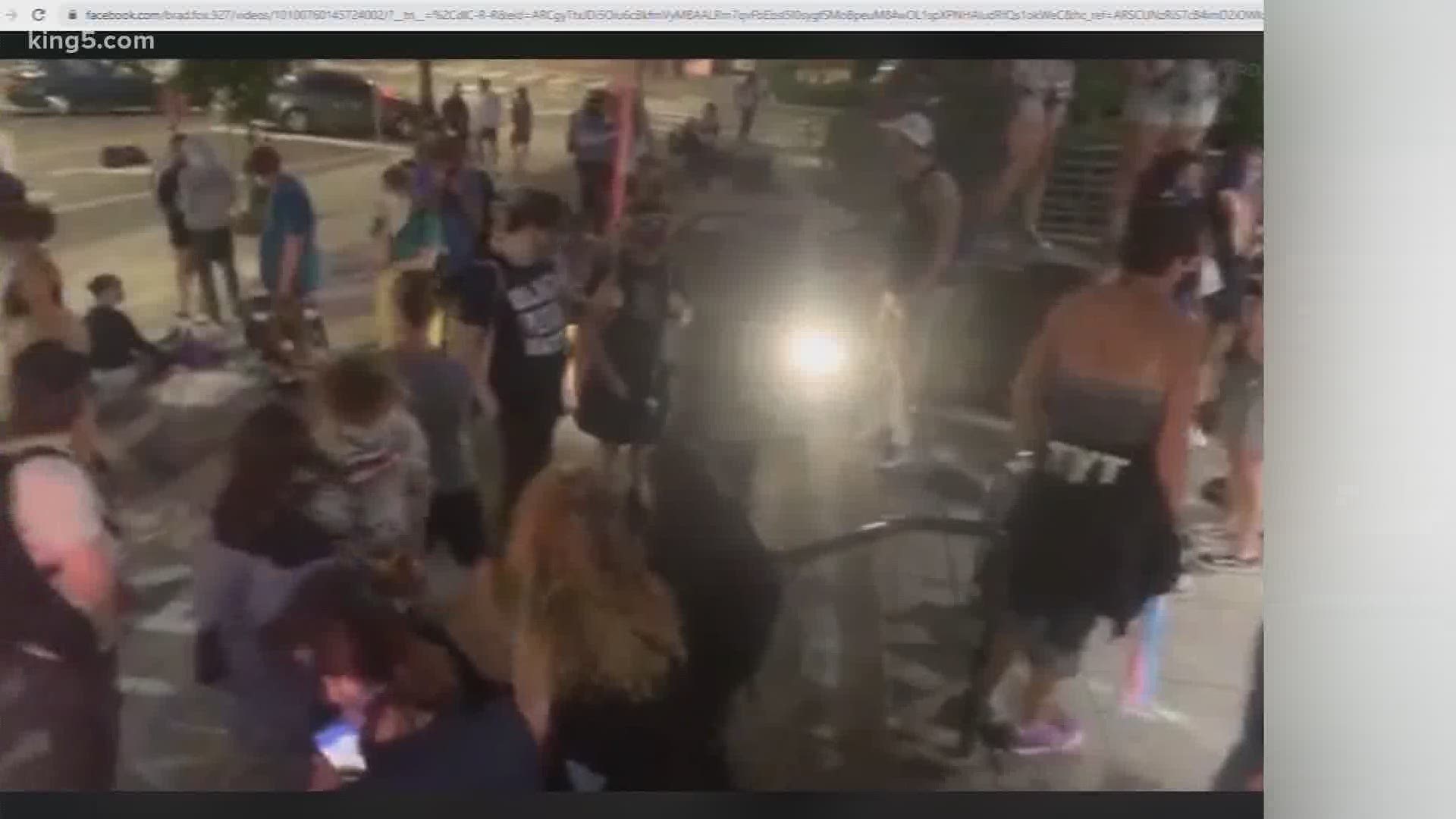