Video of the altercation, where a man pulled out a gun at a Woodinville rally, racked up nearly 3 million views on Twitter. 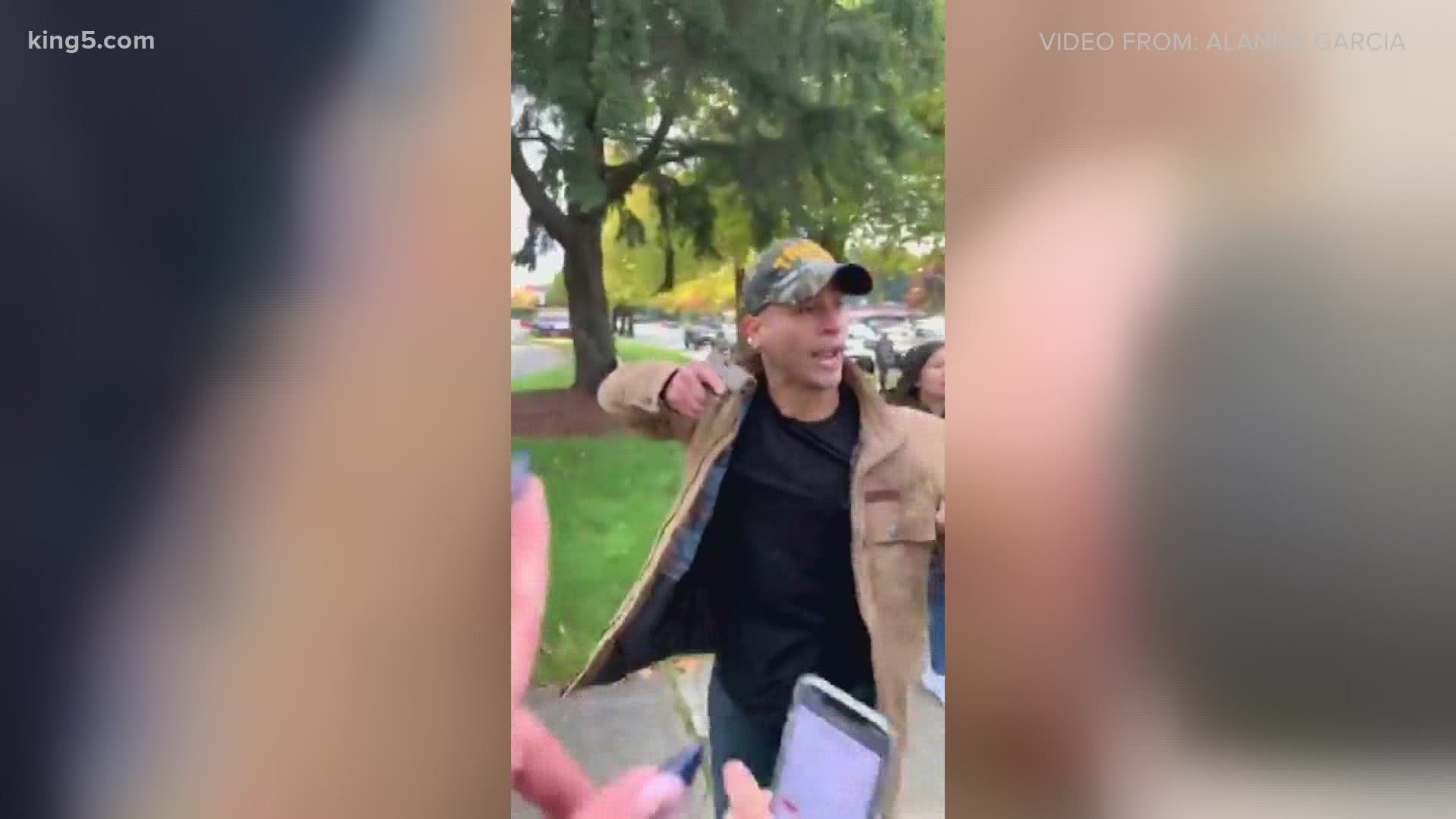 WOODINVILLE, Wash. — A collision of politics Saturday led to the melee that’s showed up on social media feeds across the country.

In the video making the rounds on multiple platforms, a man wearing a Trump hat points a gun at a countering group.

During a small pro-Donald Trump demonstration in Woodinville on Saturday afternoon, Mandy Luttinen was standing with a smaller group of counter protesters, the majority of whom were teenagers. There was yelling and swearing on both sides but she said it was pretty uneventful.

It was wrapping up when she said a person unknown to her or the rest of the group with a bucket of some sort of dirty liquid appeared from behind a Bank of America sign.

“He threw like this bucket of dirty water on one of the Trump supporters,” she said.

That’s when the firearm came out. While it's legal to carry a gun in public in Washington, the way it was pointed at people is being scrutinized by people online.

Luttinen said she instinctively got in between the man and the group of teens.

"There wasn't a lot of thinking. I've been in a couple tense situations and you do act more than you think,” she said. “It was just like, don't let the kids get hurt.”

Hossein Khorham was a part of the group supporting Trump. He says the man who pulled the gun is a friend, a good person and a veteran who served in Afghanistan.

He said the counter-protesters were calling them racist. He pointed out that most in his group were of mixed descent, including himself who is an Iranian immigrant.

“We don’t embrace acts of violence,” he said.

“We've got a lot of work to do, because we want to interview a lot of people and try and put everything in context,” said Woodinville Police Chief Kathleen Larson.

Larson said her team is still collecting information and evidence to figure out what happened, regardless of public opinion.

“There are two sides to every story, and in this particular case, in this video, we don't see what precipitated the man pulling out his firearm, and he was assaulted prior to that,” she said.

The polarization of our country is clear as scenes like what happened in Woodinville are becoming more common.

“It's important right now not to be inflammatory. It's important to try to find a way to bring people back together,” said Luttinen.

As we inch closer to the election, Larson asked us all to put decency above politics.

“It's unfortunate that the messages from both sides, from all sides, are not heard, because now we're dealing with this. And so their message was lost. And to create lasting permanent change, you got to take a step back. We all need to take a step back and start listening to each other,” she said.

Woodinville Police and the King County Sheriff’s Office are investigating. Anyone with more video of the incident or who might have witnessed it happen are encouraged to contact either department.