Some barriers come down around Seattle’s ‘CHOP’ zone, but future remains uncertain

It is unclear when the Seattle Police Department will make a move back to the East Precinct or if demonstrators will stay in the Capitol Hill Organized Protest zone. 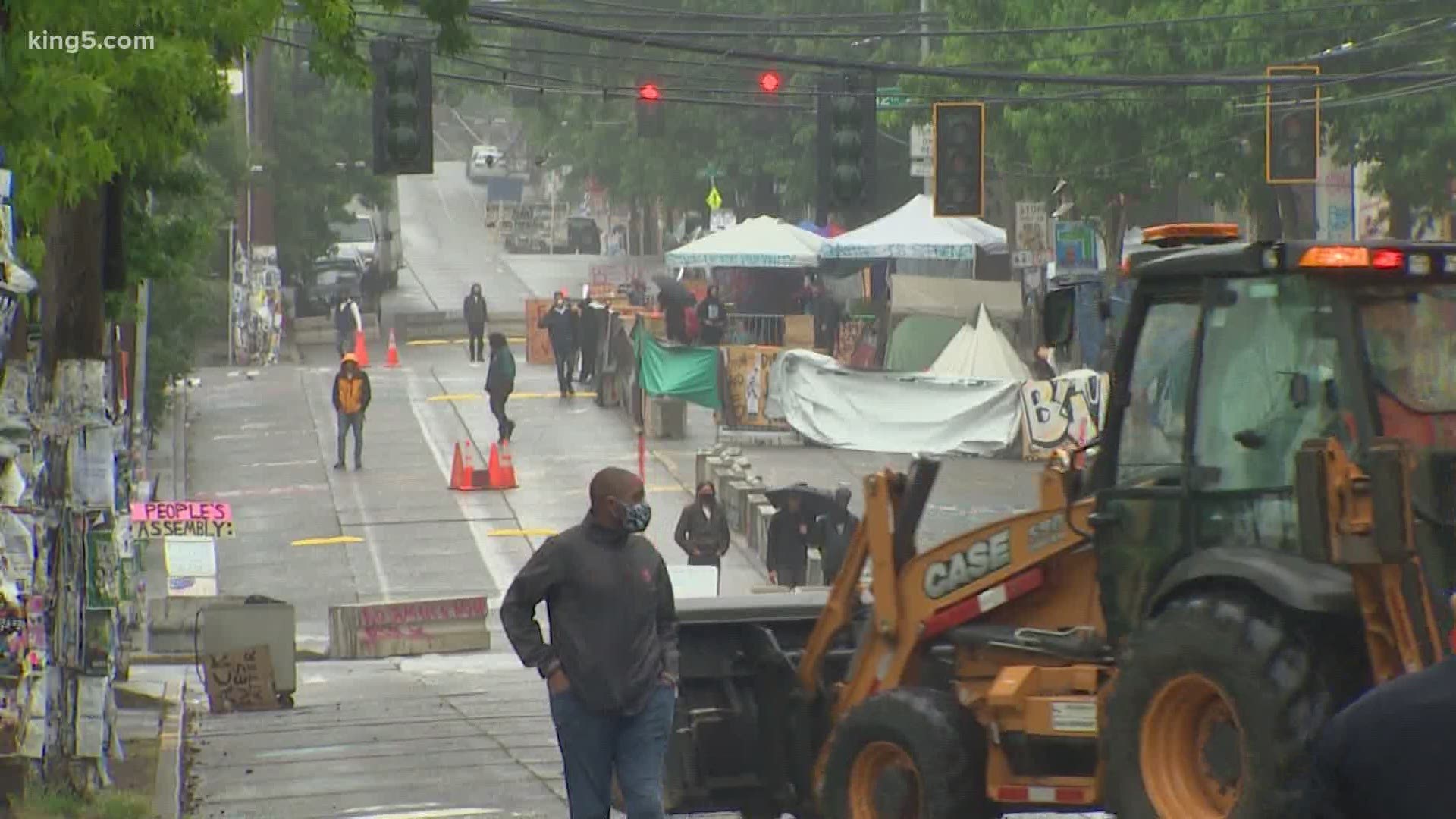 SEATTLE — The 'CHOP' zone is changing —  its footprint, shrinking.

In a move that was supposed to happen over the weekend and under the eye of officers, Seattle Department of Transportation bulldozers took away the concrete barriers at 10th Avenue and Pine Street Tuesday morning.

Seattle Mayor Jenny Durkan said last week that the Seattle Police Department will begin returning to the East Precinct in the CHOP, although a timeline wasn't provided. The precinct was evacuated on June 11.

But by Tuesday, only a handful of concrete barriers were taken away at the Capitol Hill Organized Protest zone's western border. The rest remain.

"Hopefully as we do this in incremental steps, it will have a good outcome," said Deputy Chief Adrian Diaz of the Seattle Police Department. SPD was providing assistance to crews.

Police are hopeful this will be the first step towards normalcy, but some protesters say it's a move that makes their message stronger.

Salisbury has been on the ground at CHOP and the marches that preceded it since the beginning, live streaming for hours every day. He says while the crowds at CHOP may have dwindled, those who remain are more committed to the movement, and a smaller area means more control.

Not every protester agrees. There's not one organization in charge, but for the folks who've been here day after day one thing is clear: regardless of the barriers, they plan on staying.

"This is a very wide and diverse group of people that are out here. They just happen to be at the East Precinct and they all know that they want to stay there as long as it takes to meet whatever their specific demand is," said Salisbury.

While it's clear the protesters are staying, what's not very clear is SPD's next move.

"We don't know how decisions are being made. We don't know who made the decision to abandon the East Precinct," said Bob Scales, CEO of consulting group Police Strategies.

Scales is also a former King County prosecutor and public safety policy advisor for the city of Seattle.

He says SPD is doing a disservice by not revealing their timeline of moving back into the East Precinct.

"What you're seeing is this deafening silence from City Hall and from the police department," Scales said."This isn't about some secret operation, you need to let the protesters and public, and particularly the neighbors and businesses know what the plan is."

On Monday, Police Chief Carmen Best would not provide details of when her department would return to the East Precinct.

"We can't tell you the specifics, but in all honestly, we have to work through that piece," Best said.

In nearby Cal Anderson Park, which is down one block from the precint, Seattle Parks and Recreation said its crews would focus on cleaning litter and assessing the park and critical reservoir infrastructure on Tuesday to see what other larger cleaning and repairs will need to happen in the upcoming days.

“The aim is for Cal Anderson to be restored and repaired for future demonstrations and other park uses,” Parks and Recreation said in a blog post.

The city has said no changes will be made to the CHOP-established community food garden in the park or the art that was put up by demonstrators.

Officers have mostly stayed out of the CHOP zone during the June occupation. Police said they would only respond during life-threatening emergencies.

As the barriers were being removed from 10th and Pine, Diaz could not say when officers would once again occupy the East Precinct or even come back to the CHOP and take down more barriers.

While a timeline for taking more barriers down is yet to be seen, hope for the best outcome is on the minds of all, including those who cover it, like Salisbury.

"Whatever the resolution is here, I hope that it puts our city of Seattle in a totally different trajectory for us to reach these goals that we aspire to be," he said 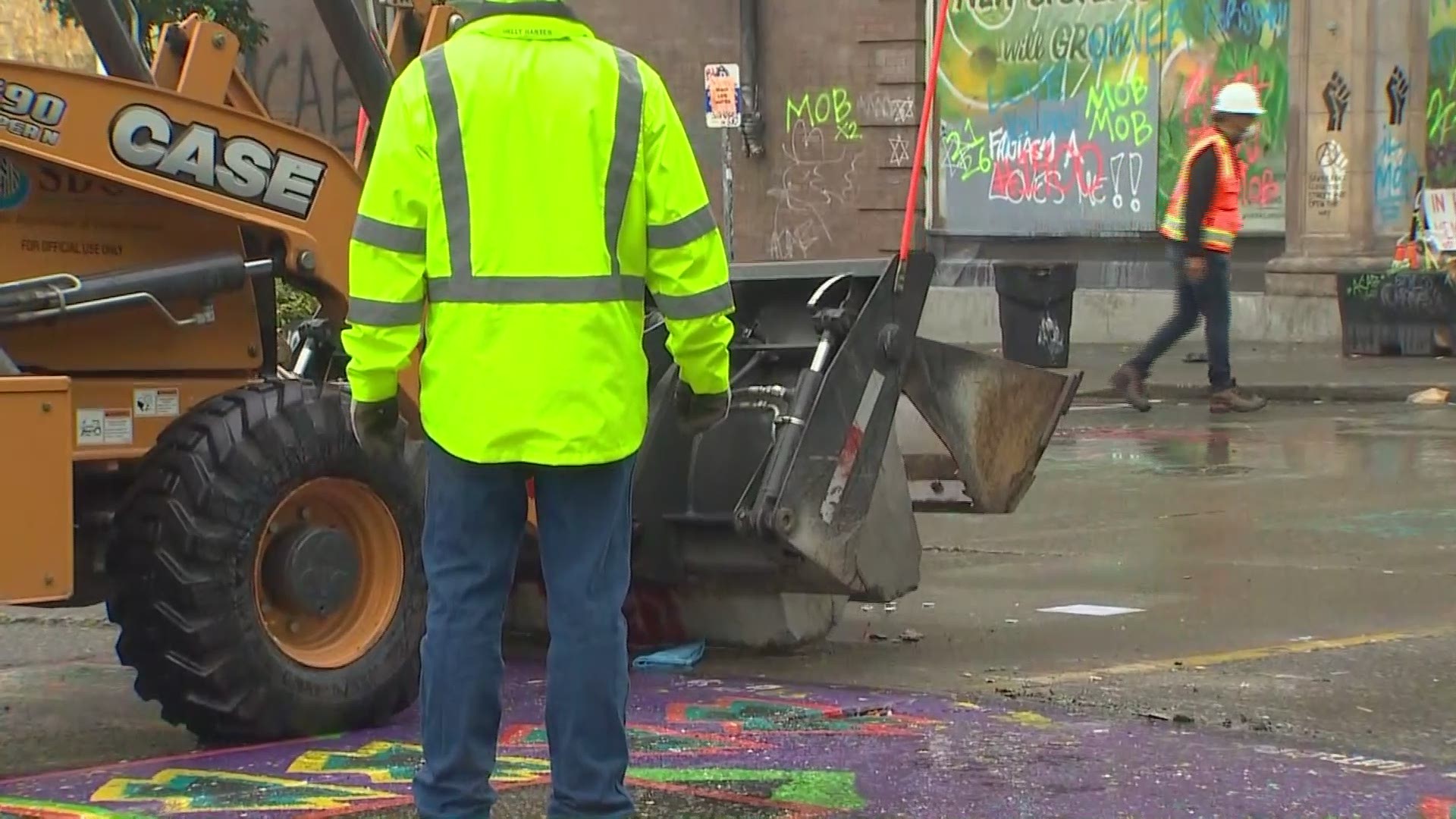 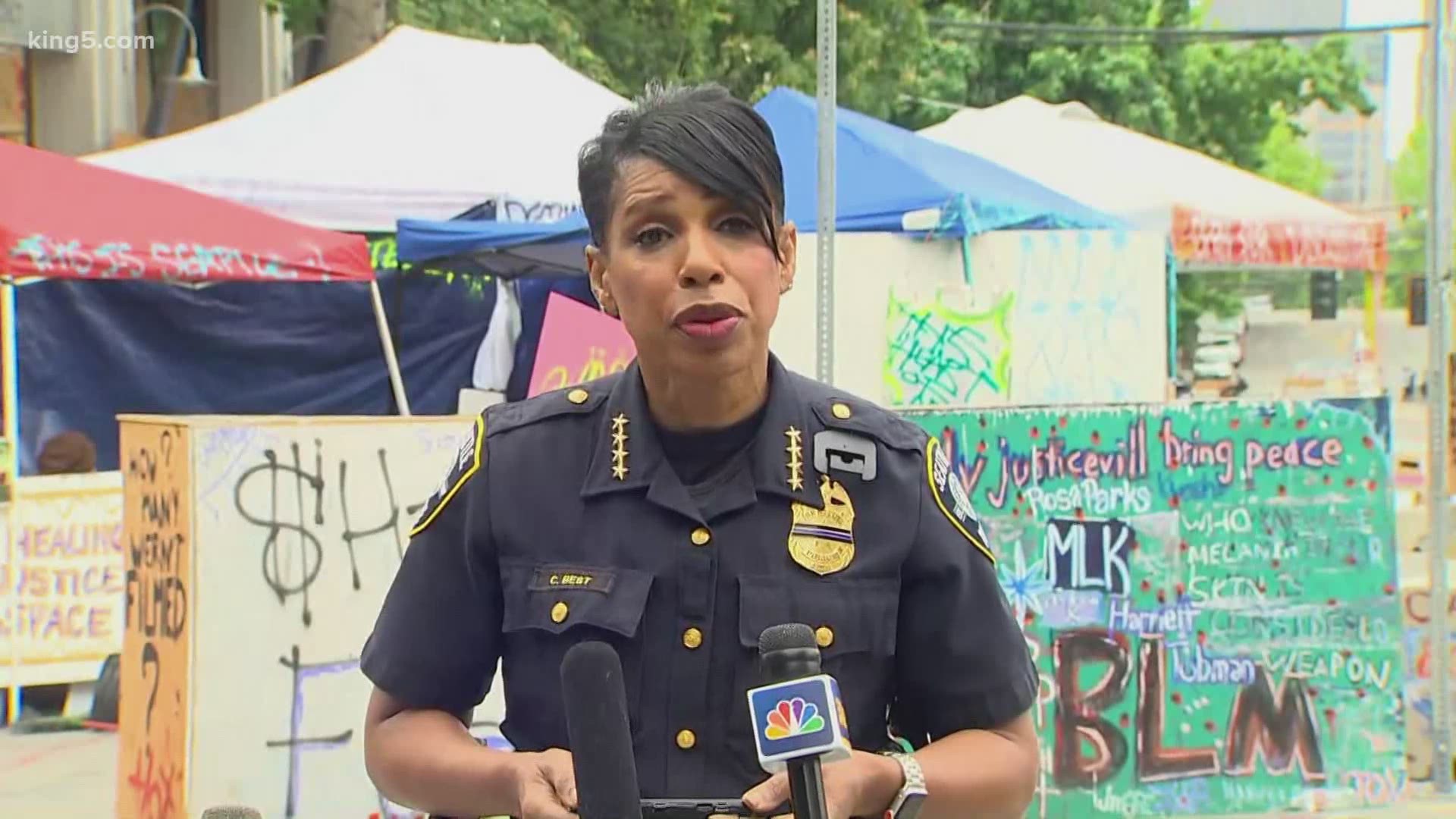