‘Charge them and fire them’: Protesters, family of Manuel Ellis call for Tacoma officers’ termination

Protesters gathered at the Tacoma Police Department to demand the firing of four officers, who are on leave after Ellis was killed during an arrest. 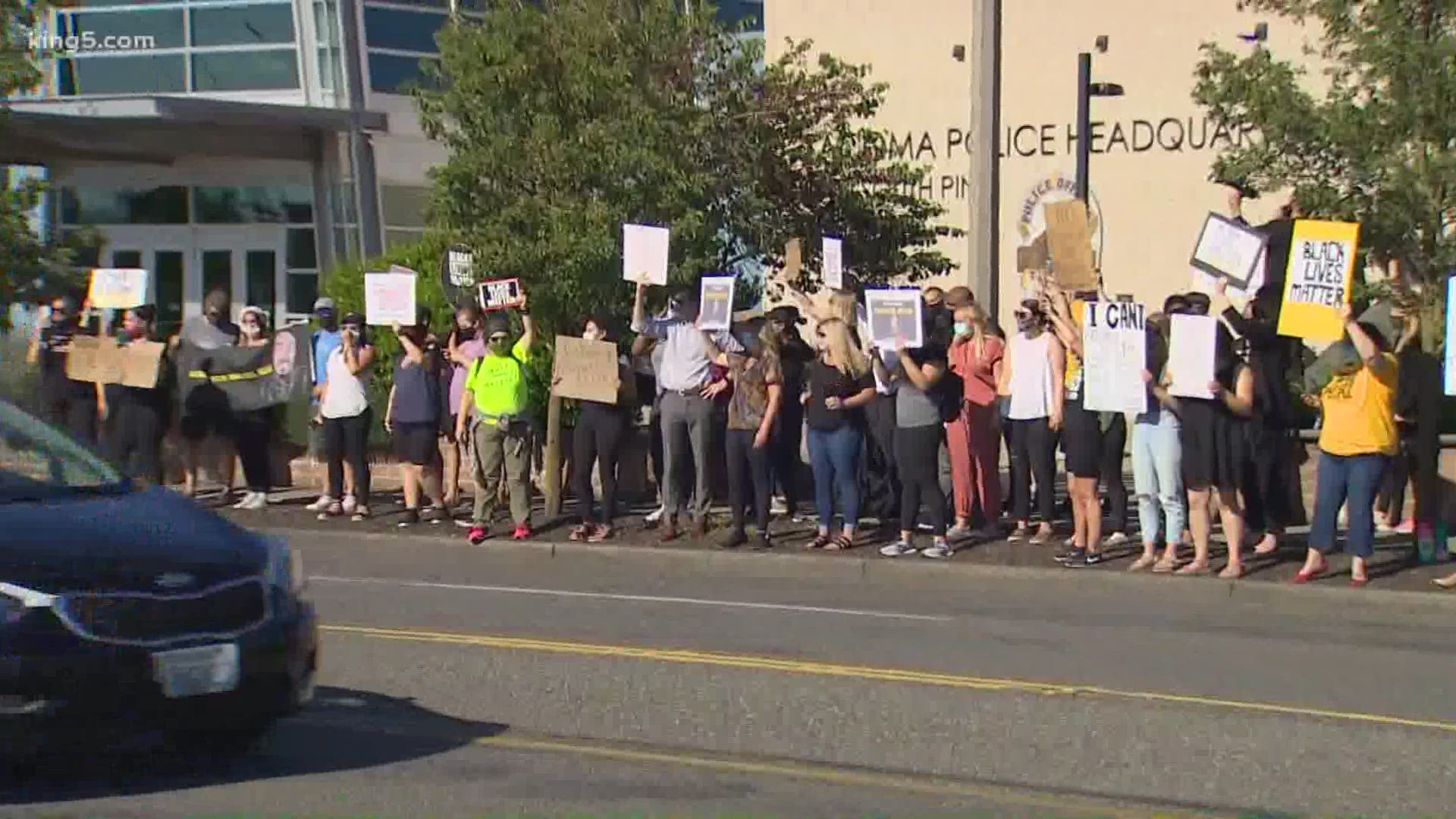 TACOMA, Wash. — Around 100 protesters gathered outside of the Tacoma Police Department Thursday, urging the city to terminate the officers involved in the March 3 arrest of Manuel Ellis, who was killed in March during an arrest.

Ellis’ sister, Monét Carter-Mixon, joined the protesters, who also called for discipline against the four officers, Christopher Burbank, Matthew Collins, Masyih Ford, and Timothy Rankine, who are on leave as the investigation continues.

The protest was organized by a group of defense attorneys who said they are frustrated with a lack of transparency from Tacoma police.

“We want the officers disciplined. We want the investigation done fairly,” said protest organizer Joseph Evans. “Frankly, we think there’s enough evidence at this point to charge them and fire them, and we’re going to hold local leaders and local politicians accountable.”

Three cell phone videos taken by passersby on the night of March 3 show at least two of the officers detaining Ellis aggressively. An officer can be seen punching Ellis in one video. In another video, one officer pulls Ellis backward into a brief chokehold while a second officer attempts to deploy a Taser at him.

“As local attorneys, we see these sorts of abuses often,” Evans said. “We want a broader conversation in Pierce County about what sort of policing is going on and what the policies are in regards to policing communities of color.”

Tacoma Police Chief Don Ramsdell has declined to speak directly to the Ellis investigation because it is ongoing, but in a wide-ranging interview with KING 5 this week, he defended his department’s handling of use-of-force cases.

“We have high values as an organization,” Ramsdell said. “We have to be held accountable for our actions, so whenever we’re faced with situations that need to be looked at in regards to allegations of unbecoming conduct, we take that very seriously.”

RELATED: Tacoma police chief will not resign over death of Manuel Ellis in police custody

Ramsdell pointed to his department’s work with racial justice organizations and training of officers on implicit bias and diversity as proof of the department’s commitment to combating systemic racism.

He also emphasized that he has directed staff to write a set of new policies based on the viral “Eight Can’t Wait” police reform campaign, including a ban on chokeholds.

But Carter-Mixon, Ellis' sister, said the reforms are not enough. She accused authorities of attempting to cover up her brother's homicide and, in the process, of violating Initiative 940, the voter-approved initiative aimed at revamping investigation of police use of deadly force.

Carter-Mixon said she also was not satisfied with a decision to have Washington State Patrol investigate her brother’s killing and she still hopes for an independent investigation not conducted by a law enforcement agency.

RELATED: I-940 passes, regarding police use of deadly force