Dozens of protesters gathered in Tacoma to demand action against the officers involved in the deaths of Manuel Ellis in Tacoma and Said Joquin in nearby Lakewood. 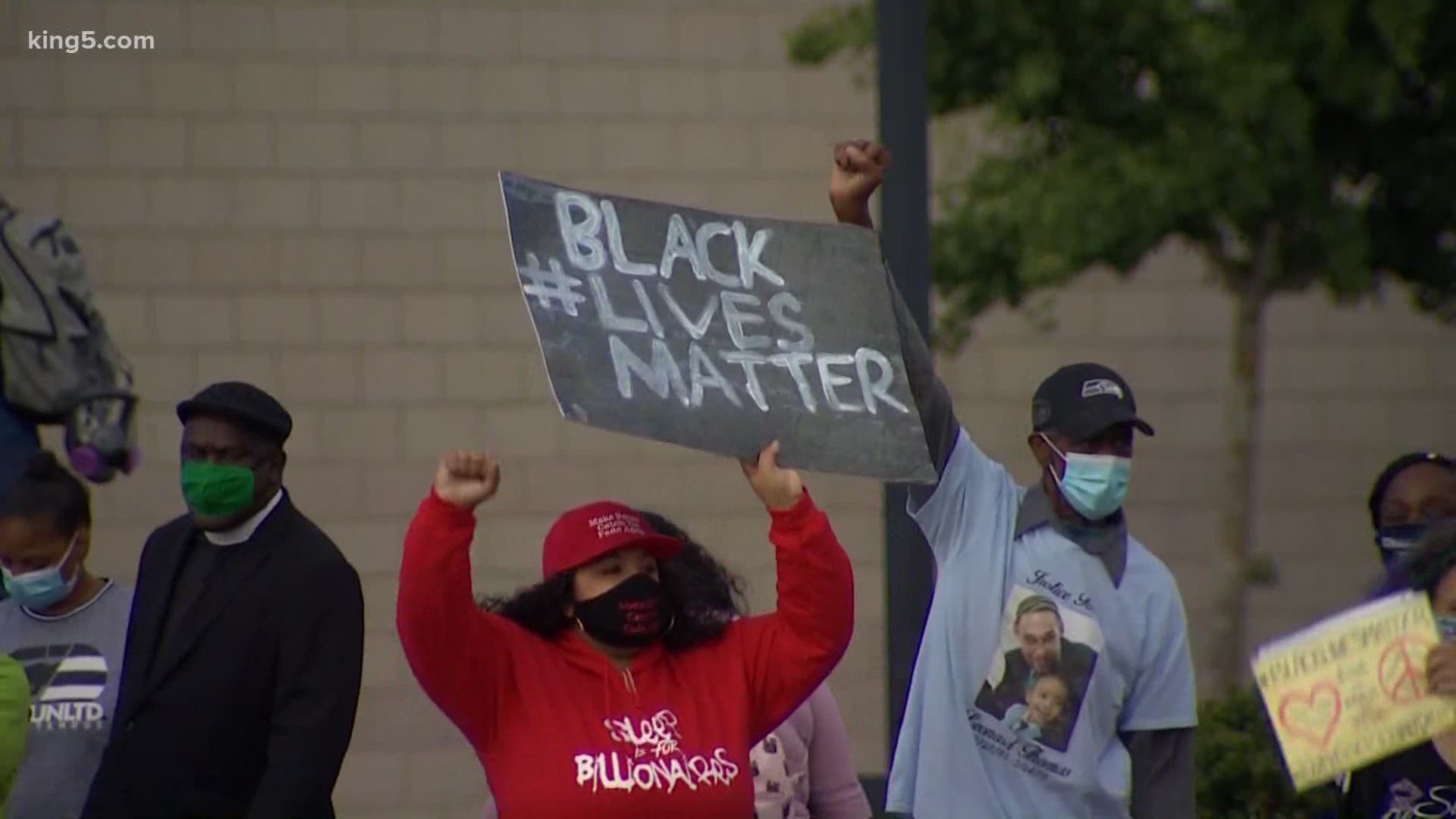 TACOMA, Wash. — For the second time in two weeks, dozens of protesters gathered at the Tacoma Police Department to demand the firings of the four officers who are on paid leave after the killing of Manuel Ellis in their custody.

Protest organizer and defense attorney Corddaryl Woodford said the protest was one of several that would be staged in the coming weeks to put pressure on the department.

“This department itself should be pushing for criminal charges against these police officers,” said James Bible, an attorney for the Ellis family.

The officers, Christopher Burbank, Matthew Collins, Masyih Ford, and Timothy Rankine, were placed on administrative leave in early June after the Pierce County Medical Examiner ruled Ellis’ death a homicide caused by a lack of oxygen due to being restrained.

The protesters also remember Said Joquin, a man who Lakewood police officer Michael Wiley shot to death after a traffic stop on May 3.

Joquin's family traveled from North Carolina to attend the protest.

“It means a lot to see that people actually care,” she said.

Deatura Joquin said two months after her brother’s killing, she is struggling emotionally.

“Every time an ambulance passes by my chest hurts and I cry,” she said, through tears. “It just confuses me how the world keeps going after this happened because my world stopped.”

The Joquin family filed a tort claim against the Lakewood Police Department, Officer Wiley, and Lakewood Police Chief Michael Zaro. It is the first step in the process of filing a wrongful death civil lawsuit.

The Puyallup Police Department is the lead agency investigating Said Joquin’s killing. Deatura Joquin said her family has been frustrated by the slow trickle of information from them.

“There’s no transparency,” she said. “The police just keep saying they won’t give us anything until they’re done with their investigation.”

Woodford said he has watched the city of Tacoma make incremental changes, like establishing new protocols to communicate with families after a deadly use of force and establishing a website with details of deadly force investigations.

But he said those changes are not enough.

Woodford said protesters would gather in Tacoma again on July 10 at 2 p.m. to retrace Manuel Ellis’ final walk, from his residence to the intersection where he was killed after walking to a convenience store to buy snacks.