House Bill 1910 would eliminate a decades-old cap on the number of special education students Washington state will fund. 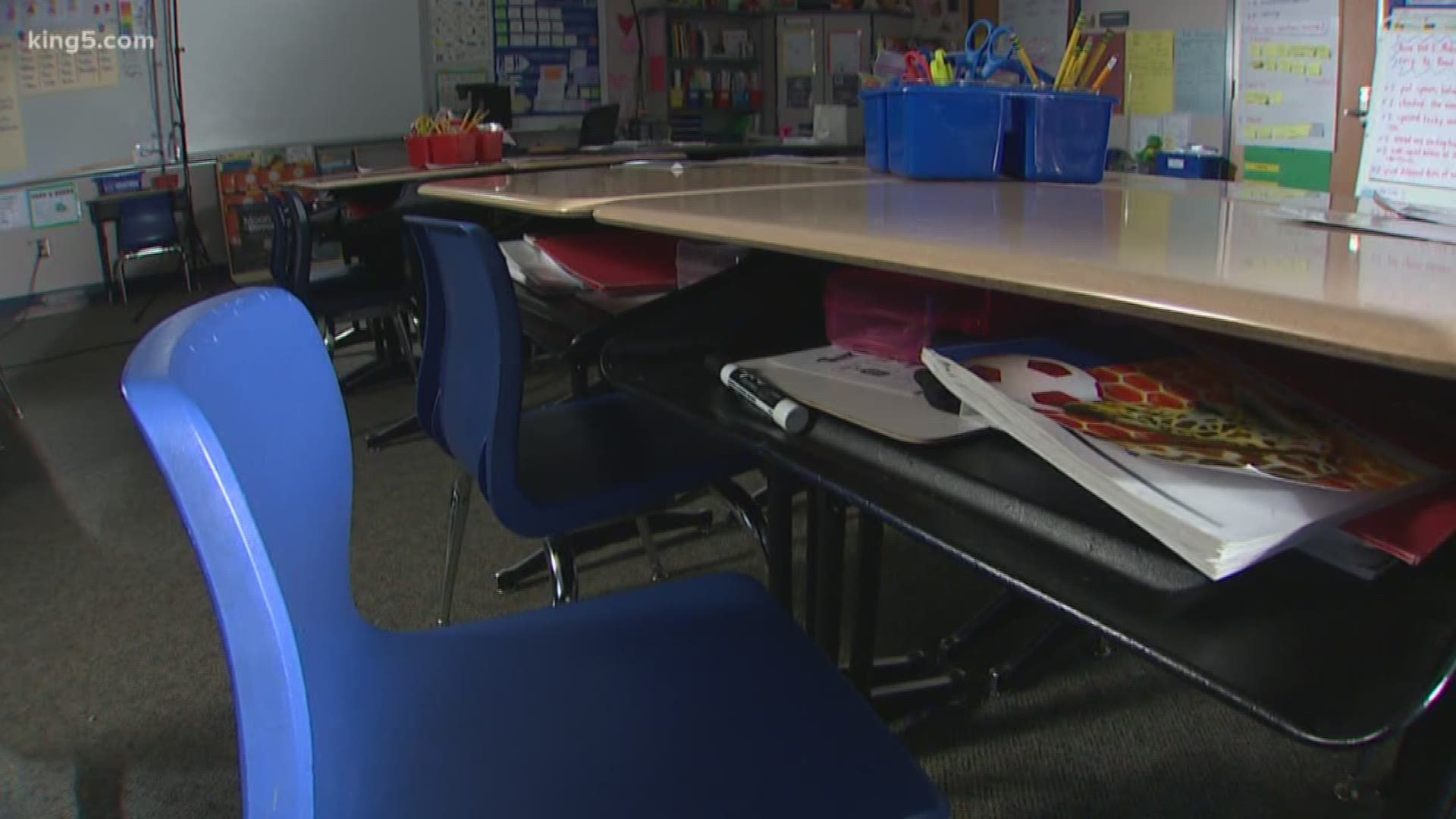 OLYMPIA, Wash. — Washington House lawmakers introduced a bill Monday that would eliminate a decades-old cap on the number of special education students the state will fund.

It’s one of several attempts to address Washington state’s special ed funding crisis, which has left thousands of special needs students without access to the individualized education services they are guaranteed under state and federal law.

The Democrat-sponsored bill, which hasn't yet been scheduled for a hearing, would force the state to increase the amount of money it spends per special education student. It would require the state to pay school districts based on the average number of special education students who live and are enrolled in the district — a major change from the model the state of Washington has followed for the last 24 years.

Currently, the state will only shell out money to support the special education students who make up to 13.5 percent of a district’s total population — even though more than 100 school districts, in the 2017-2018 school year, reported having more students with special needs enrolled.

RELATED: Back Of The Class - An Investigation Into WA's Special Ed Failures

"Our state has been denying students with disabilities their constitutional rights to basic education by cutting off funding to the school districts with an arbitrary percentage," said Rep. Gerry Pollet, D-Seattle, the primary sponsor of the bill.

Statewide, special education is underfunded by millions of dollars. A 2018 KING 5 investigation, which included interviews with dozens of special education experts, educators and parents, revealed that the state's cap on funding has:

How Did We Get Here?

It was a 1995 study that shaped the landscape for Washington’s current special education funding system. Prior to that year, Washington funded special ed based on the number of students with special needs enrolled in school districts.

But policymakers suspected school districts were gaming the system by over-identifying special education students since more dollars were attached to each of them. The study echoed their fears, and it led the state to put a 12.7 percent lid on the number of students it would fund with extra special ed money in any district.

The legislature bumped up the 12.7 percent cap to 13.5 percent at the start of the 2017-2018 school year. It was a change, championed by Rep. Pollet, that forced the state to provide school districts an additional $14.9 million for excess special ed costs.

"There's no doubt it helped but it has still left thousands of children without support from the state of Washington," said Rep. Pollet, who introduced legislation to eliminate the state's cap two times before. "The result is school districts turn away a child altogether, which is illegal but they do it or they simply are under incredible pressure to reduce the services for all the children."

Noah Legg-Lopez, a 6-year-old non-verbal student with autism, didn't receive an education for months because his Snohomish County school district, which exceeded the 13.5 percent cap, denied him a chair in the class last school year.

Credit: Taylor Mirfendereski | KING
Noah Legg-Lopez, a 6-year-old non-verbal student with autism, watches a video on his iPad at his Redmond home.

“We have enough battles that we fight all the time above and beyond what a neuro-typical kiddo might face," Noah's mom, Lindsay Legg, said. "Getting a basic education should not be one of them.”

School officials at the rural district told Noah's family that it was too small to serve him, and they were not equipped to meet the child's unique educational needs. The situation forced his mom to uproot their lives to a new city and pay hundreds of dollars a month for a private therapy program.

It’s not uncommon for states to adopt a funding system that seeks to limit the amount of money they spend on special ed.

At least eight states, including Alabama, Alaska and California, don’t consider the actual number of students with disabilities in their districts. Instead, they use historical census data for all funding considerations. In Oregon, districts that have more than 11 percent of students on IEPs receive a reduced amount of money for every student over that percentage.

But Washington is the only state with a funding model that provides no supplemental money to pay for students above a cap, according to EdBuild, a nonprofit school funding research group that has analyzed funding models in all 50 states.

School districts have the option to apply for additional state money on a case-by-case basis through a “safety net" process, but that pool of money is not big enough to meet the demand, a KING 5 analysis of the 2016-2017 safety net awards revealed.

It's important to understand that even if the cap were lifted tomorrow, special education in the state would still be underfunded by millions of dollars.

Many public schools below the cap also struggle to accommodate student needs because they report a major shortfall in special education funds. The Everett School District, which has 11.9 percent of its K-12 students enrolled in special ed, reported a $9.9 million shortfall in the 2017-2018 school year.

Rep. Mike Steele (R-Chelan), who serves as the ranking member on the House Education Committee, said eliminating the cap "could be part of the answer" to addressing the state's special ed funding shortfall.

But he says it's too early to know if he'll support Pollet's bill, as it has not yet been analyzed by education experts.

"I'm not opposed to [the bill] on its face," he said, adding that he expects other special-education funding bills to drop this session. "I'm committing to seeing every solution that's before us before we make an ultimate decision. This is just one area of consideration."

“My hope and my commitment to special education funding is that we find a solution that works so that no student and no district struggles,” he said.

In the Senate, a bi-partisan bill was introduced last month that proposes to eliminate the cap for school districts with fewer than 1,000 special education students enrolled.

Under Senate Bill 5532, districts that serve more than 1,000 special education students would continue to see a 13.5 percent cap.

Sen. John Braun, R-Centralia, and Sen. Christine Rolfes, D-Bainbridge Island, the top-ranking members of the Senate Ways and Means Committee, are both sponsoring the legislation, which also seeks to make other changes, including improving special education training for teachers and providing families with free access to special education advocates.

That bill is scheduled for a public hearing in the Senate Committee on Early Learning & K-12 Education on Feb. 8.