The Washington State Department of Ecology found ground-up tire rubber used for plastic sports turf along 21 miles of the river. 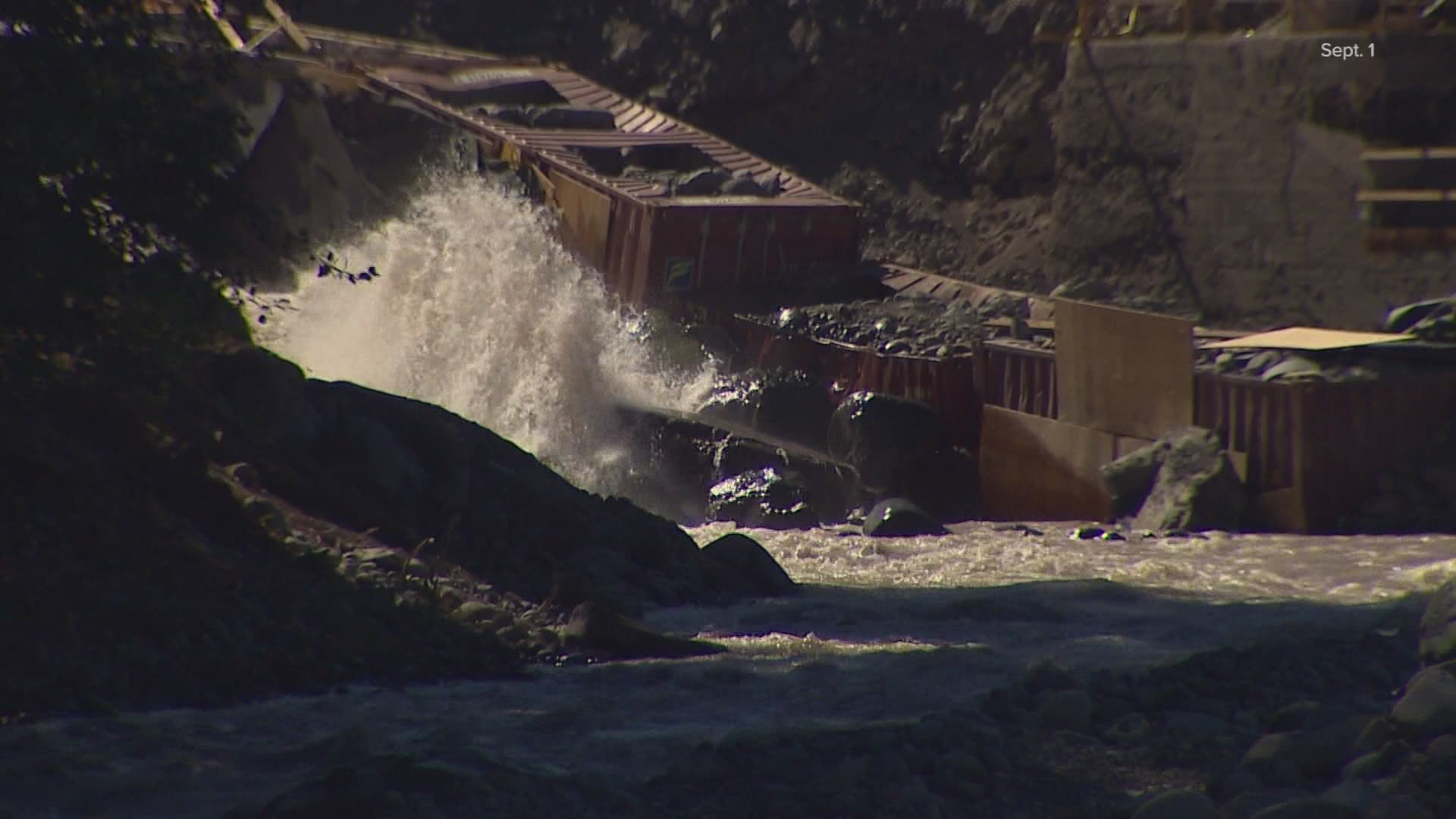 PUYALLUP, Wash. — In October 2020, the Puyallup Tribe claimed that Electron Hydro, the hydropower company behind the Electron Dam, polluted the Puyallup river with crumb rubber from artificial turf, a claim they later sued the company over in federal court.

Roughly eight months later, the Washington Department of Ecology announced it is fining the company more than $500,000 for the violation.

The pollution was caused by an Electron Hydro construction site that was doing work in-stream and using the artificial turf to create a bypass channel to divert the river away from the site beginning on July 28, 2020, according to the department.

The goal of the construction was to replace the company’s diversion dam and water intake structure, which dates back to 1903.

Almost immediately after, river rocks broke through the liner and caused roughly 617 square yards of sports turf and about four to six cubic yards of ground-up rubber to be discharged downstream.

The Department of Ecology says Electron Hydro did not report this incident but that it was a citizen who came forward on July 30 to report the use of sports turf and crumb rubber.

Later, the company told the department that it begun clearing turf materials from the river and shorelines, reporting early in the cleanup that it had placed 13,000 pounds at a landfill.

1 / 3
Eric Marks/Puyallup Tribe Biologist
A piece of artificial turf recovered from the Puyallup River in March, 2021.

Pieces of sports turf were found up to 21 miles downstream, according to the Department of Ecology, and deposits of ground-up tire rubber used as padding for the turf were believed to go roughly 41 miles downstream all the way to the river’s mouth  and possibly into Commencement Bay in Tacoma.

“These toxic materials had no place in the river. The force of the water tore the turf apart, washed it down river, and sent it right into the food web. This is an environmental tragedy that didn’t have to happen,” said Ecology Director Laura Watson in a released statement.

The turf and crumb rubber are toxic when ingested by species that call the Puyallup River home like steelhead, bull trout and chinook, which are all protected under the Endangered Species Act.

In addition to the fine, totaling $501,000, the Department of Ecology is also issuing an Administrative Order against Electron Hydro to address continuous water quality violations related to the company’s operations.

A spokesperson for Electron Hydro said that the company will appeal the order and fines to the Washington State Pollution Control Hearings Board within the next 30 days.

Chairman of the Puyallup Tribal Council Bill Sterud sent the following statement in response to the state's actions:

"The Department of Ecology’s fine against Electron Hydro today for its discharge of sports turf into the Puyallup River is a good step to protect our water and critically endangered sacred fish.

"It is not the only step. We lose fish year after year. They begin life on the mountain and get chewed up by Electron Dam. Those that survive go down the river – now polluted by crumb rubber – and out to the bay, where they are greeted by multiple superfund sites. If they make it that far, they head out into the ocean through polluted waters, where they are butchered by commercial fisheries and seals.

"Enough is enough. Fish don’t care about fines and bank accounts. They care about safe, unobstructed passage and clean water. The dam must be removed.

"This is our message to Electron Hydro: We will continue to protect and preserve these waters. Myself, Tribal Council and 6,000 Puyallup Tribal Members are watching you.

"We appreciate Ecology’s willingness to take the company’s atrocious actions seriously and hold it accountable, with the mechanisms it has at its disposal. Contaminating the mountain’s clean water and damaging the home of fish and wildlife has led to numerous actions from federal and state agencies. The Tribe looks forward to the EPA and other federal agencies meeting their trust obligations and holding Electron Hydro accountable in federal court in addition to the actions taken by Ecology today."