All marijuana must be tracked from seed to sale, according to state law. The traceability system that does that had a glitch. 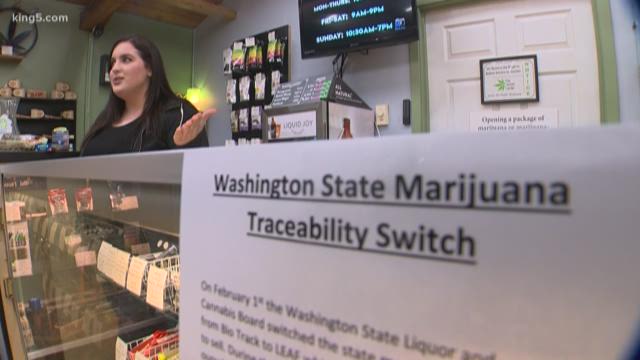 There's been panic in some pot shops because the businesses have not been able to accept new deliveries, and that's not only hurting the shops but also their vendors.

According to Washington State Liquor and Cannabis Board (WSLCB), an "application bug" in a new traceability system that surfaced Saturday caused the issue. An alert was sent to licensees on Monday, saying the issue had been fixed. However, some businesses say they are still experiencing problems.

At The Herbal Center in Tenino, manager Iesha Molnes says they have about a third of the product they would typically keep in stock. She does not know when they will be able to get more. For the last few days, she says she has been explaining the situation to customers.

"A lot of customers aren't familiar with what the traceability system even is, so it is like explaining something to them that they don't even understand," said Molnes.

All marijuana must be tracked from seed to sale, according to state law. The traceability system that does that had a glitch.

At The Herbal Center, they can only sell what was on the shelves before the tracking trouble.

"On any given time, we probably work with 50 different vendors, and they are all having issues," said Molnes.

He pointed to $14,000 worth of orders just sitting in a room because, for his business, things are on hold.

According to WSLCB, the application bug in the traceability system caused sporadic problems, but the system should be functioning now.

"I will believe it when I see it," said Pilon. "I've noticed some of my products have come over from this system into the new system, but they are not talking back and forth."

In a letter, Jeremy Moberg, a WSLCB traceability advisory member, conveyed an "urgent request to return to the Unified Contingency System, which has maintained cannabis reporting compliance for the last three months."

At the time Moberg wrote the letter, he noted that there were "1,800 licensees without functional traceability and unable to conduct business and maintain compliance."

In response to Moberg, Peter Antonlin, Deputy Director of WSLCB, wrote "the system is functioning properly now." He added "the state is committed to tight regulation of the industry and implementing the new traceability system is necessary for our purposes."

WSLCB says it is a new traceability system that they are rolling out, and they have a team actively monitoring it to identify any issues and prioritize for quick fixes.