The guild uploaded a nearly two-minute video produced video from the declared riot, set to music. Clips show fireworks exploding around the officers. 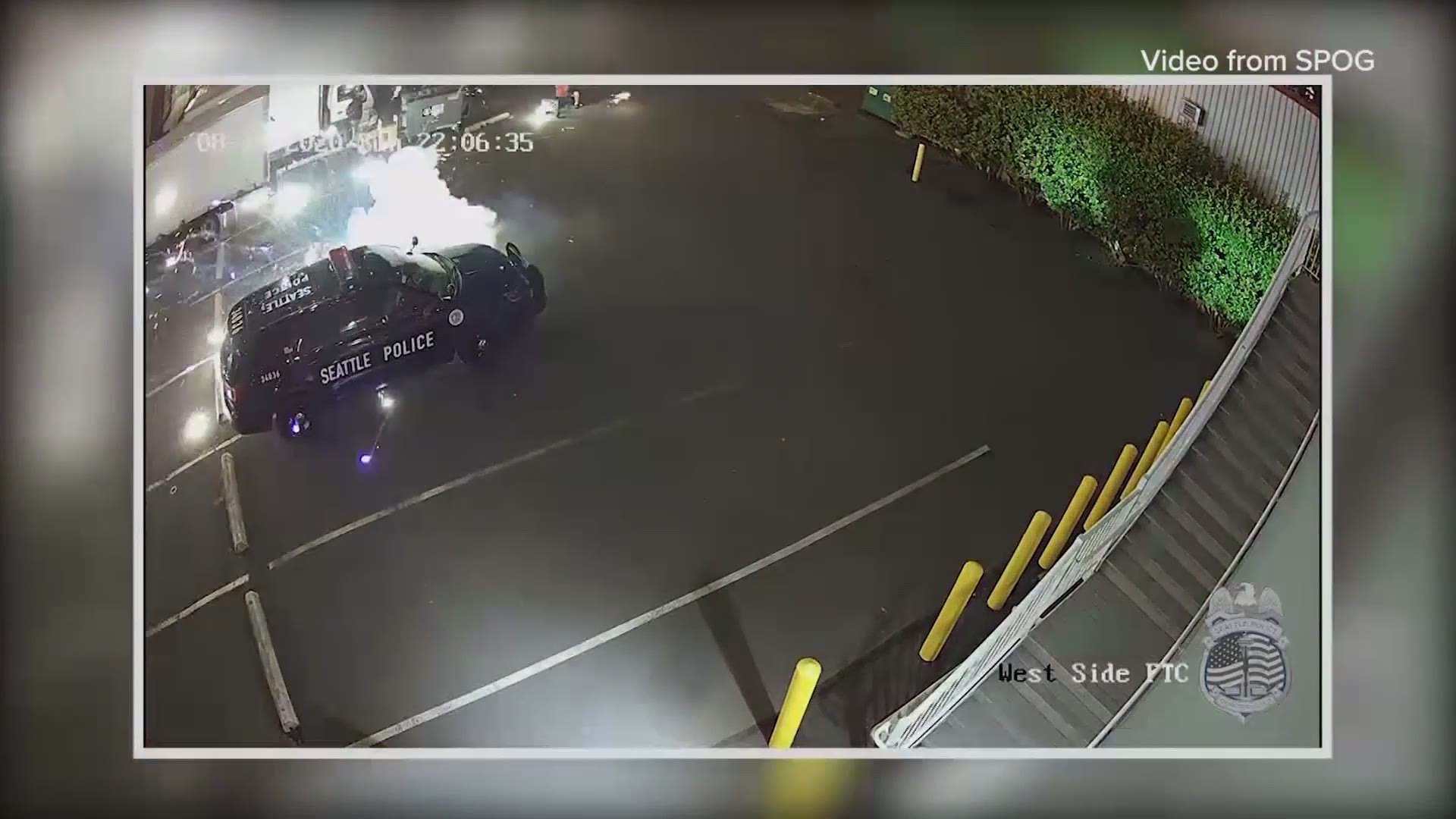 SEATTLE — The Seattle Police Officers Guild released video on Wednesday from a protest that happened Sunday night that ended up at their building in SODO. That protest was declared a riot by officers.

Six Seattle Police Department (SPD) officers were injured during the clash, which happened a little after 10 p.m. at the guild location on 4th Avenue. Police said protesters lit a ‘large explosive’ and threw fireworks at officers. According to SPD, 18 people were arrested.

The guild uploaded a nearly two-minute video produced video from the declared riot, set to music. Clips show fireworks exploding close to the cameras all around the building – events captured on security footage from a nearby business earlier in the week.

"I was very sorry to see this weekend reported by Seattle Police Department that 59 officers were injured with one of those being hospitalized with injuries ranging from abrasions and bruising to burns and a torn meniscus.  We don’t know how many protesters have been injured.  My twitter feed is full of pictures of injuries," she said, according to a transcript sent by her office. "...As I have, I will continue to speak against property damage and call for peaceful protest."

When Seattle University communications professor Victor Evans was shown the video, he said he had questions about how the presentation impacts depiction of the events of that night.

“You have the music setting it up, it’s already on this dark screen, then you have the words popping up,” said Evans. “…I immediately thought, 'oh wow, this is really setting up quite the narrative here.'”

He said it reminds him of common political ads, and indeed, defunding the police has become a political issue, with some calling for a swift 50% budget reduction, and others resisting that push. The council's latest measure on the subject falls well short of the 50% mark.

“Definitely, yes,” said Evans. “Definitely the techniques are completely being used out of the rhetoric, to get a message across, to push an agenda.”

Seattle Police also shared a minute and thirty seconds of bodycam and recorded stream video from the event.

KING 5 asked SPOG president Mike Solan if the guild plans to release the un-edited videos from that night.

“Possibly, possibly,” he said. “Right, it’s our video. If there’s a government agency doing an investigation on the criminal actors that did this domestic terrorism against Seattle police officers, we’re more than willing to cooperate.”

He reiterated a call for those responsible to be held accountable by city leaders and the justice system.

“...the fact that officers got hurt, six of them, two in the hospital, to me, is significant emotion based upon, the focus needs to be put the domestic terrorists, and their main mission is to burn this building down that I’m standing in front of right now,” said Solan. “That’s where the main focus should be, whether or not the music of a video relative to criminal actions against police officers is the focus of this interview.”

He said he believes “the video stands by itself.”

Still, Evans said he has questions.

“The first thing that came to mind after I saw the video is I really didn’t see what actually happened,” he said. “I mean, the actual event itself was never – we saw a couple quick clips and jump cuts of different things. It was so chaotic, and I’m sure that was the purpose to show it. It’s just the narrative is set up, protesters on the offense, inciting the incident and police officers being hurt and attacked physically with close-ups to really appeal to our emotional sense. And that’s it – we didn’t really see what actually took place.”

He said when teaching his students about media literacy, he asks them to consider both what is shown in a video, and also what is omitted. 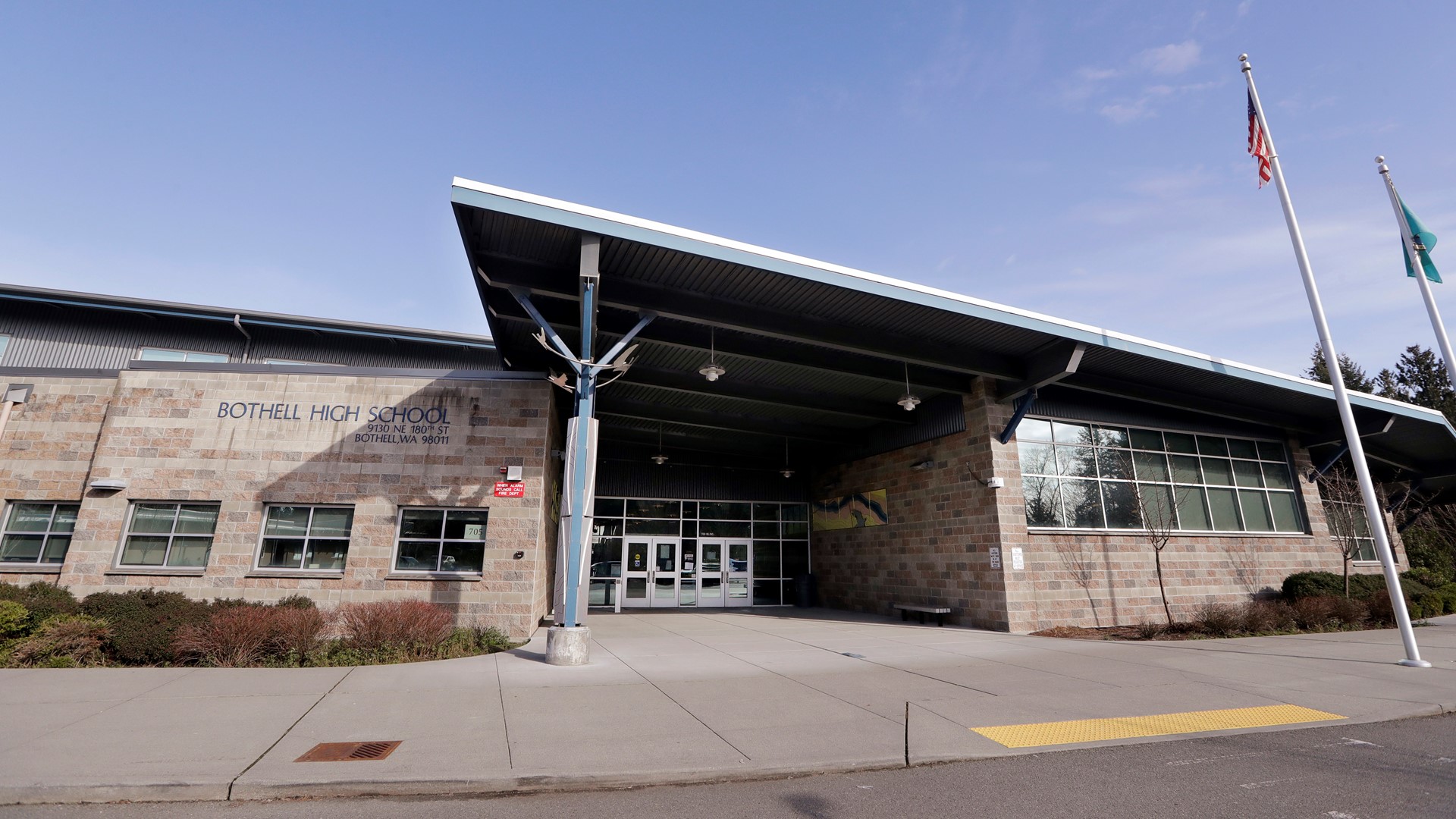