The town of Point Roberts, Washington, is surrounded by water on three sides and has been isolated during the pandemic due to the U.S.-Canada border closure. 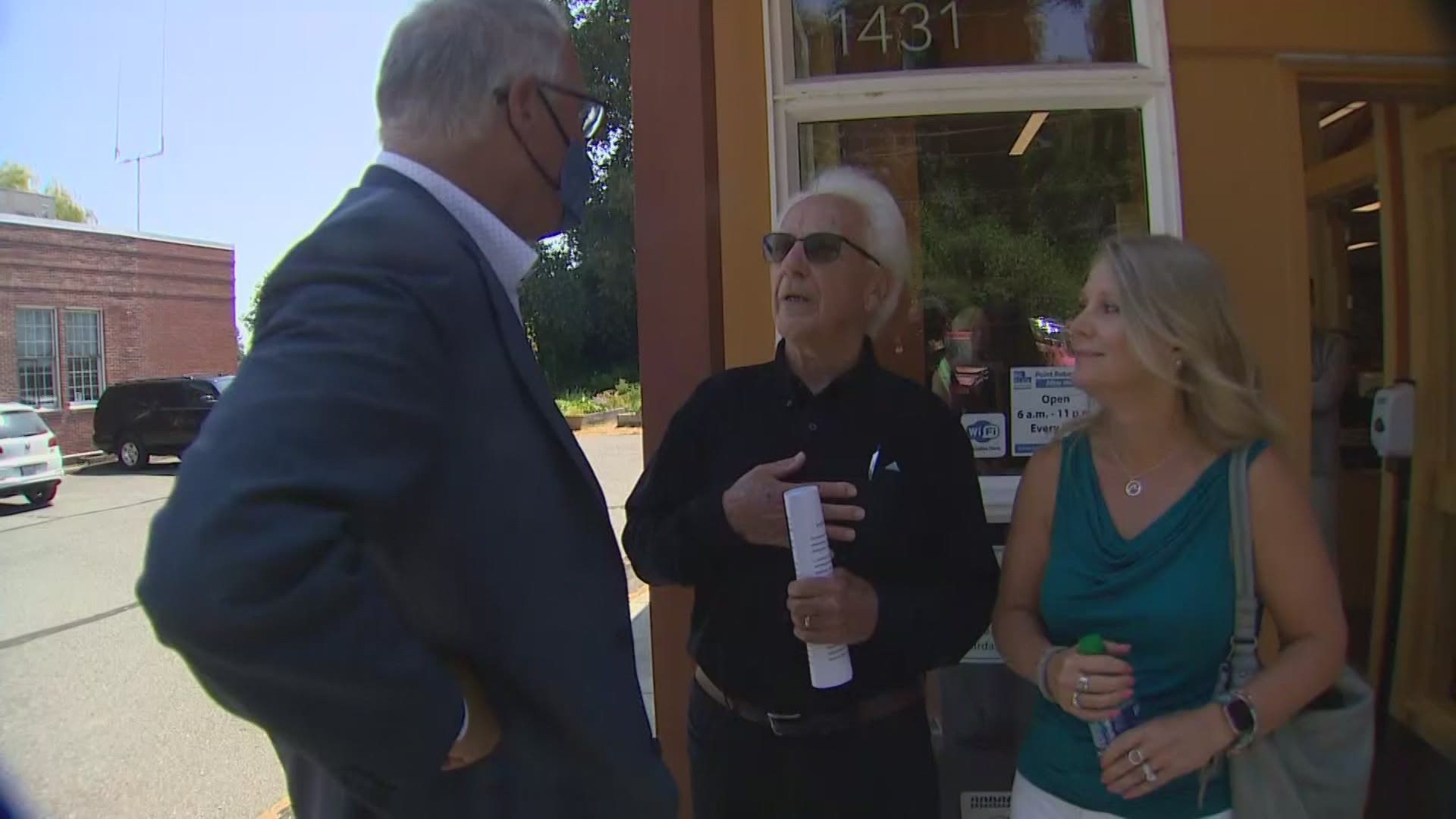 POINT ROBERTS, Wash. — Washington state's governor landed in a small Cessna plane on a grassy field Friday, and then helped push the plane back. It was an odd sight, at this odd site, in a COVID-related chapter that appears to have no end in, well, sight.

"There is no reason not to allow vaccinated Canadians to come here from the north," he told KING 5 in between stops at the isolated five-square-mile piece of land just south of Tsawwassen, B.C.

Inslee was greeted at the town's library by a few dozen residents, who have complained for months about their unique situation, and how the international border closure has choked off any business or travel to the point.

Point Roberts Fire Chief Christopher Carleton reiterated that he's helped to vaccinate 85% of the nearly 1,000 residents. The Chamber's Brian Calder presented what he called a "J&J Solution," a play on words related to the vaccine, that he believed could be accomplished with some resolution by Jay Inslee and Joe Biden. Others suggested that Inslee push the White House to allow for an exemption, or approval for Canadians to return to the point.

Inslee told the group that he believed the problem with reopening involved people from the "north side of the border," and that he's open minded about allowing vaccinated Canadians to return to their homes and businesses.

Washington Congresswoman Suzan DelBene, (D) Medina, told KING 5 she's encouraged residents to share specific details of when Canadian border agents have restricted even essential travel, so that she can present to officials for evidence of the unique circumstances here.

"We should be able to do something for the folks to come across the border," she told KING 5.

Both Inslee and DelBene have penned letters to U.S. and Canadian security officials urging a reopening of the border.

Inslee, who had some of the strictest mandates in the country during the pandemic, said he's open minded to a unique solution that would allow Point Roberts residents to travel outside the area, or Canadians to visit, even if the Trudeau Administration has a different set of rules.

"Our infection rate, vaccination rates are close enough now, that there is not a huge enough difference," he told KING 5, "We're in the same boat right now."

As it stands, the joint international ban on non-essential travel at the U.S.-Canadian border remains in effect through July 21.

Editor's note: A previous version of this story indicated Congresswoman Suzan DelBene mentioned checking border agents badge numbers, however, it was Gov. Jay Inslee who actually made that suggestion during the Point Roberts visit.