Grocery workers in Pierce County say the extra $4 an hour in hazard pay is justified, given the conditions workers have to deal with during the pandemic. 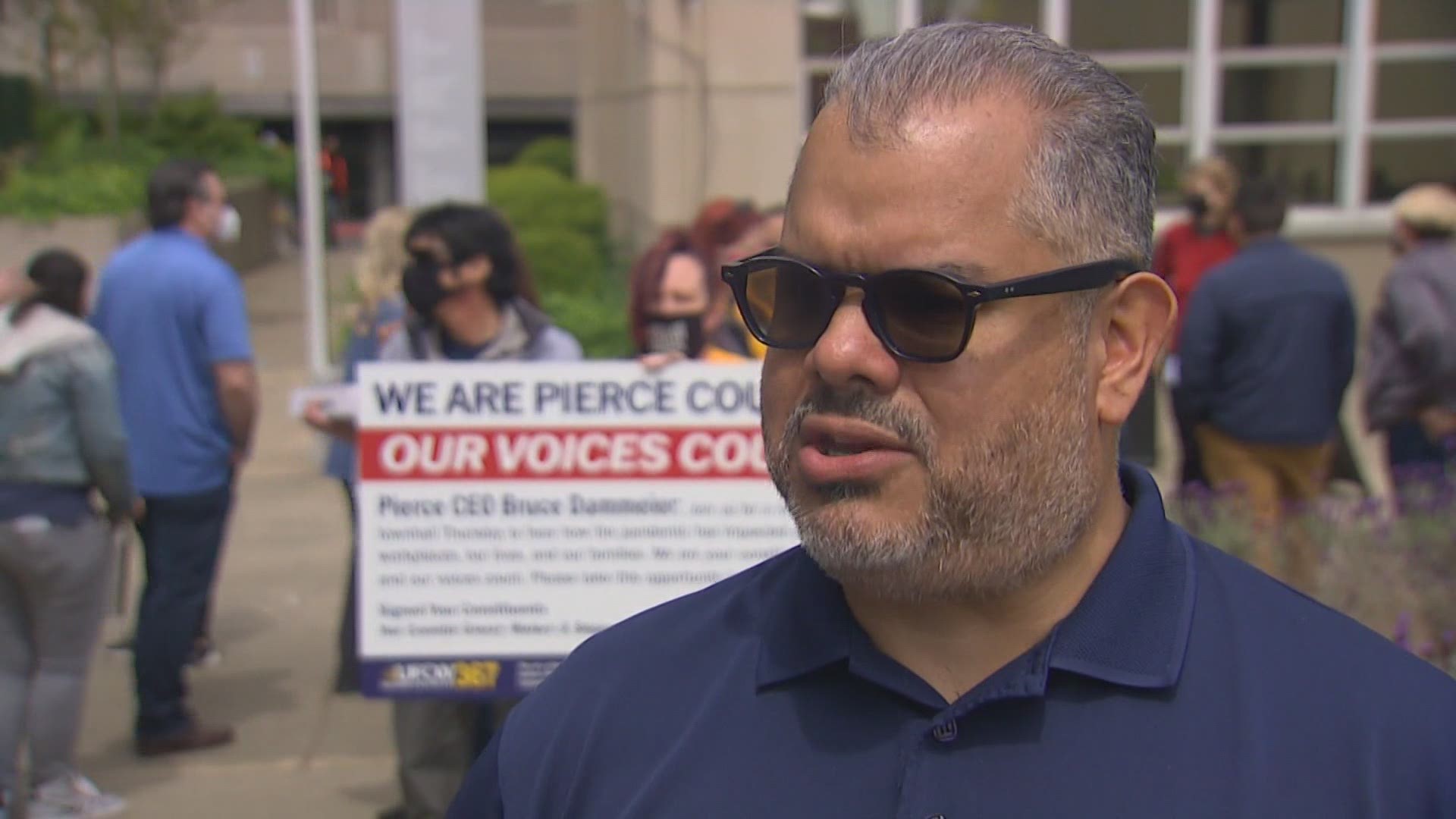 PIERCE COUNTY, Wash. — Grocery workers in Pierce County are demanding they be heard after an ordinance granting them hazard pay was rejected by the county executive.

Workers, along with their union representatives, gathered at the Pierce County Courthouse Wednesday to support legislation that would provide an extra $4 an hour in hazard pay during the pandemic.

Union representatives from UFCW 367 said the increased pay is justified, given the conditions the workers have to deal with, and where the benefits of their labor end up.

“The stores are hazardous right now,” said Patricia Estes, a former grocery store employee and member of UFCW 367. “The customer abuse is out of control. I personally have been spit on, I’ve had a chainsaw thrown at me from across a customer service desk, I’ve had an associate that had a customer pull his mask down and sneeze all over her. And she had to wash herself off and come back to work.”

“We work in an industry where there’s not only been hazardous situations in our stores, they’ve had massive profits because of the pandemic,” said Angel Gonzalez, president of UFCW 367.

Union members were also frustrated at seeing neighboring regions like King County and Olympia get this kind of support.

However, Pierce County Executive Bruce Dammeier said approving the hazard pay ordinance would be an example of government overreach.

“I have a big concern about government reaching into privately, collectively bargaining agreements,” Dammeier said. “[The workers] have a lot of power within their unions and their employers, and that’s the primary way to do that. Inserting government in there is a concern.”

In a statement released just minutes after the legislation was passed by the Pierce County Council Tuesday night, Dammeier said he intended to veto it.

In response, union members met with Dammeier directly, not only to speak on why they’re calling for hazard pay, but to address what they see as not being heard.

“What we’re here to talk about why you vetoed a measure five minutes after it was passed, without even listening to us, talking to us, or meeting with us,” Gonzalez said to Dammeier. “It seems like you had it all figured out, and you wanted to veto it. You say you care about grocery workers, and you’re sorry we’re being mistreated, and you’re sorry things are happening, but actions speak louder than words.”

But at the end of the meeting, Dammeier remained unconvinced that hazard pay was the solution.

“What I heard was a concern for their safety, and their concern that because they’re not in a safe environment because of COVID, they want an increased pay,” he said. “My answer is, let’s make their workplace as safe as we can, that means let’s vaccinate them.”

Councilwoman Jani Hitchen, the main sponsor of the legislation, said she hoped they would’ve had the opportunity to speak to Dammeier about moving forward, and was disheartened to see him reject the legislation so quickly. She also stated that this is a matter of public health, and that more should be done to make sure grocery workers are safe so grocery stores can stay open.

The council now has 30 days to act. A two-thirds council vote is required to override an executive veto.