Mellanie Mcpheeters and Christine Ott started a Facebook page for lost and found pets in Mason County. Since they started the group, they find they are filling a gap left when the Mason County Sheriff's Office got rid of its animal control position. 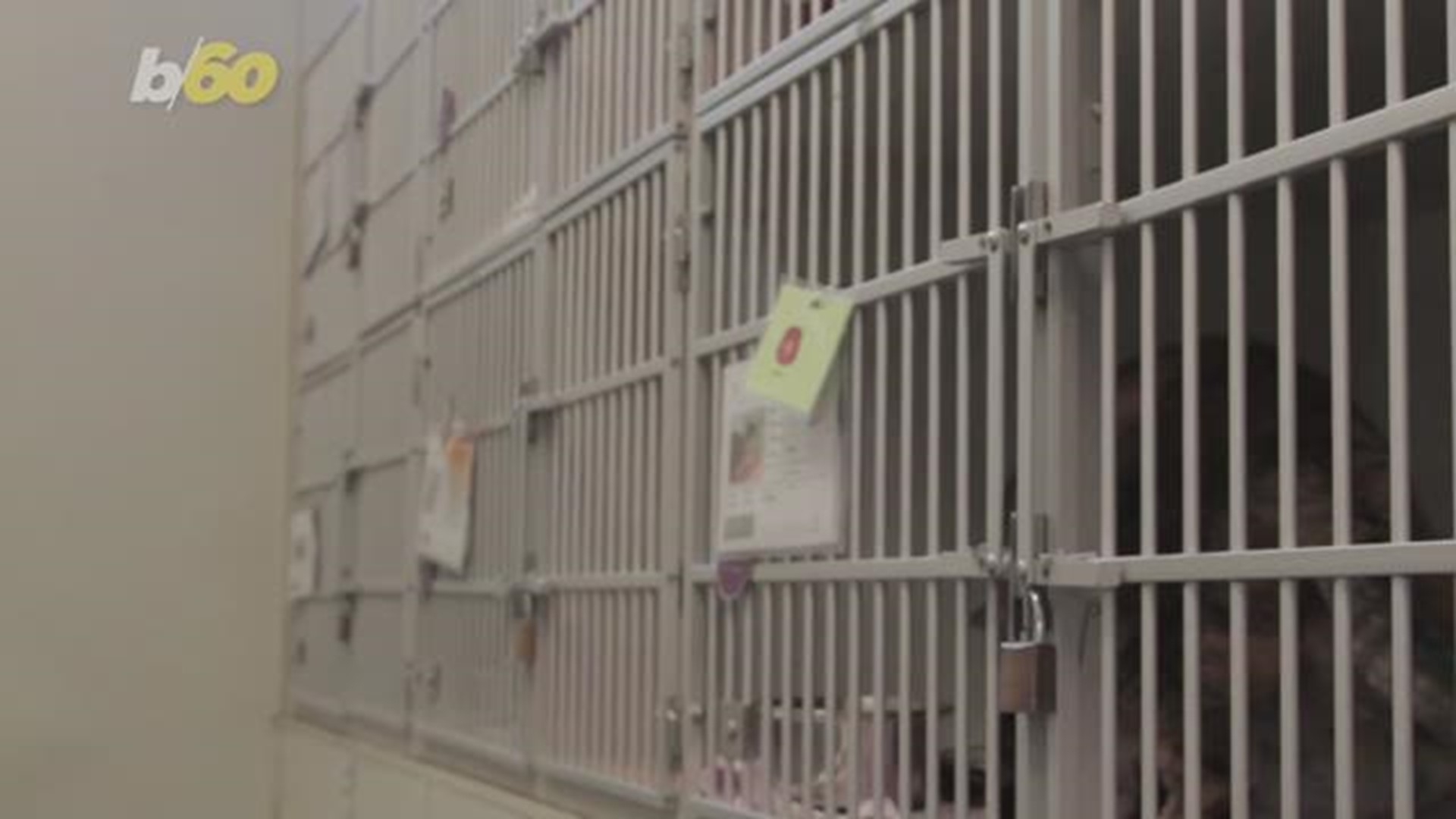 When Christine Ott started a Lost & Found Pets Facebook page for Mason County three years ago, she didn’t expect it to lead to 3 a.m. calls about stray, abandoned and neglected animals.

Ott had started the Facebook page in 2015 after adopting her own rescue dog, Colby, an escape artist keen on slipping away from her.

She soon realized how few resources Mason County pet owners have when it comes to finding lost animals. But she also learned, with friend and partner Mellanie Mcpheeters, that Mason County needed more than a Facebook page to deal with its host of animal control problems.

“Since we started, we have dealt with quite a few animal abuse and neglect cases. Most situations are regarding abandoned animals, since the county has no resources for them.”

The cases include the first dog they responded to in September 2016: an abandoned pit bull dumped near the Mason-Thurston county line. Later, they found an underweight dog with a muzzle roaming near Hamma Hamma.

Also see | How to protect your dog from dangerous foxtail

And then there are the gruesome stories: the cat they found cut in half in a homeowner’s yard, or the two dogs found shot dead and wrapped in sheets on a rural hunting road outside of Shelton.

It was after reporting the deaths of those two dogs to the Mason County Sheriff’s Office in December — and learning there was nothing law enforcement could do to prosecute those pet owners or dispose of the animals — that the two women came to an understanding.

"We then realized we couldn’t rely on the county or other entities to provide the additional, necessary services needed to prevent similar future incidents,” Mcpheeters said.

The Sheriff’s Office responded initially by keeping unfilled positions empty, but it eventually decided to move Brewer to the role of evidence technician, freeing up a detective to return to his duties.

The now-defunct Animal Control division had been slowly losing resources since 2008, when the recession forced the Sheriff’s Office to remove one of the two Animal Control officer positions on the books at the time.

Brewer had been on fielding calls on animal control issues since then, but as the sole officer in a large county encompassing a national forest and a fjord, she wasn’t always able to respond to calls in a timely manner, nor did she have certain enforcement tools to fall back on, like leash laws.

Now, deputies are the ones who attend to animal control calls as needed, Spurling said.

Also see | How old is my pet in dog years or cat years? A veterinarian explains

“We still have Cindy as a resource, but deputies perform basic animal control duties,” Spurling said. “We can’t respond to barking dog calls, but we can deal with any criminal issues. Deputies have never really done this. They’re still enforcing, but they have no dedicated training.”

Some animal lovers feel frustrated with the Sheriff’s Office and claim that deputies have been ambivalent or reluctant to prosecute.

“The thing that sucks is Mason County does not want to do anything, money or not,” said Sebreana Richwine, a Skagit County resident who periodically visits Mason County to check on the welfare of animals once in her care. “None of this is right and these animals are suffering.”

Richwine has called in tips to the Mason County Sheriff’s Office about an alleged animal abuse case out of Grapeview that she says have gone unanswered, and she’s offered to help connect the county with resources to rehome animals she’s documented that are suffering.

“I get that they don’t have the money to do it. Then get someone who does,” she said. “Mason County doesn’t have much in the way of animal laws, but the state of Washington does and they should be following those rules.”

The case Richwine is involved in has been making the rounds on social media, but the case is still under investigation and the property owner has not been charged with any crimes, according to a post from the Mason County Sheriff’s Office Facebook page.

Despite the frustration, deputies did take action on another, high-profile case.

After obtaining a search warrant for a home on Krabbenhoft Road in Grapeview, Detectives Chris Liles and Jeff Rhoades, acting on information from deputies, found an emaciated horse, three emaciated dogs and a cat with open wounds, surrounded by trash, vomit and feces in April.

Four doves and three turtles were also found at the residence; those animals and the horse were transported to Pony Up Rescue for Equines in Olalla, while the dogs and cat received immediate medical attention at the VCA Animal Hospital in Silverdale.

“The state of the animals when found as explained by a trained veterinarian indicates that they endured unjustifiable physical pain that extended long enough to cause considerable suffering,” Liles wrote in his probable cause statement.

In May, the Mason County Prosecutor’s Office charged the pet owners, Paul and Thelma Winger, each with two counts of first-degree animal cruelty. Their cases are pending in Mason County Superior Court.

Ott and Mcpheeters, both moms balancing family and work lives with their animal control pursuits, played a major role in the prosecution of the Wingers’ case, initiating a welfare check on the horse.

The women also helped raise funds for the care of the dogs and cat at VCA Animal Hospital and worked with the Sheriff’s Office to locate rescue groups to take all the animals in.

“We want to help the citizens and animals in our county,” Ott said. “Suffering, abuse, neglect and abandonments need to stop. The solution is there, but we can’t do it alone. We need the residents of Mason County to stand up and fight just as hard for change we so desperately need and want.”

Ott and Mcpheeters still manage the pets group on Facebook, which has more than 4,000 members. But they’re also working on a bigger goal — creating the nonprofit Mason County Animal Control Authority.

Neither of them have formal training in animal control but have already put in time by answering calls to catch and trap stray animals at all hours of the night, sometimes sleeping in their cars to do so.

“I have always been an animal lover,” Mcpheeters said. “I’m lucky to work from home and do online schooling, plus with an 18-year-old, I can usually up and leave when an animal is needed, especially in the middle of the night. My daughter has also gone with me on numerous occasions as she is a huge animal lover like myself.”

Ott is also a lifelong animal lover and Shelton resident. She balances her newfound animal control duties with being a wife, mom to two young sons and a full-time pharmacy technician. In addition to Colby, her dog, she has three cats, also rescues.

“I grew up doing what I could for local animals in need,” she said. “Balancing all this can be trying at times. I have spent many days and nights away from my family doing what is needed. In addition, we also have amazing members willing and able to help when needed.”

Mcpheeters and Ott have received articles of incorporation for Mason County Animal Control Authority and are fundraising to obtain 501(c)(3) status. They were set back when they donated $500 for the care of the dogs and cat seized at the Winger residence.

They believe that by increasing resources for people, there will be a dramatic decrease in animal-related crime.

“As it stands now, citizens take drastic measures as a solution to our animal control issues,” Ott said. “If unwanted animals are able to be surrendered to a facility, citizens will feel like they have options. Without options, we are seeing animals abandoned, killed, neglected and abused.”

Mason County doesn’t have an animal shelter (the city of Shelton has a kennel for eight dogs), but the nonprofit Humane Society of Mason County plans to build one in Belfair.

In May, the Humane Society raised more than $54,000 at a local auction for its shelter building campaign, but as of July, plans to bring electricity to the property were put on hold as Mason County Public Utility District No. 3 and neighbors work to resolve an issue with an easement.

Other county rescue groups, like the nonprofits Adopt-A-Pet dog rescue, Kitten Rescue of Mason County and Sunrise Equine Rescue, are usually at capacity and work hard to keep up with demand.

Ott and Mcpheeters have received positive support from county officials about running a private animal control outfit, and they’d eventually like to work on building a shelter of their own.

“We quickly realized nothing would change, and the cases and problems were just becoming increasingly awful and sad,” Ott said. “So, we decided to take on as much as we possibly could … We have decided to take this on because the need in our county is astronomical.”

To learn more about Mellanie Mcpheeters and Christine Ott’s plans to create an animal control nonprofit, visit the Facebook group Ending the Inhumane treatment of Animals in Mason County Washington. To donate to their efforts, visit a branch of Our Community Credit Union and deposit funds into the account for Mason County Animal Control Authority.