You can thank a group of Elmhurst Elementary fourth graders if Washington state gets an official dinosaur.

It started earlier this year when Amy Cole's fourth grade class was studying government process. Her students read about how students in another state were successful in convincing lawmakers to craft legislation to create an official state insect.

But the class from Parkland had something else in mind.

Amy Cole admittedly loves dinosaurs. Her students know that. It's, "just a fact," she said.

Her students went to work. Through their research, they found out that, unlike other states, Washington doesn't have a state dinosaur.

"That's kind of where it took off," Cole said.

The students hit a dead end when they learned there were no native dinosaurs. But further digging led them to discover what researchers had dug up in April 2012.

A partial left femur of a theropod dinosaur - two-legged, meat eaters that include the Velociraptor and Tyrannosaurus rex - was discovered by Burke Museum research associates in April 2012 at the Sucia Island state park in San Juan County. The fossil, 16.7 inches long and 8.7 inches wide, is from the Late Cretaceous period and is around 80 million years old, according to the museum.

Researchers believe the dinosaur lived somewhere between Baja California, Mexico and northern California. The fossil may have been moved north to Washington along with a portion of the western edge of North America during the Late Cretaceous period, according to one hypothesis.

When Cole's students made their own discovery, they began writing to their local representatives. Those letters were compiled by Cole who then sent a single letter to Rep. Melanie Morgan. Morgan (D-29th District). Citing the fossil discovery on Sucia Island in San Juan County, and that students in other states have helped decided state symbols, the class argues, "We think that this evidence shows why the Suciasaurus Rex should be our state dinosaur." Read the full letter below. 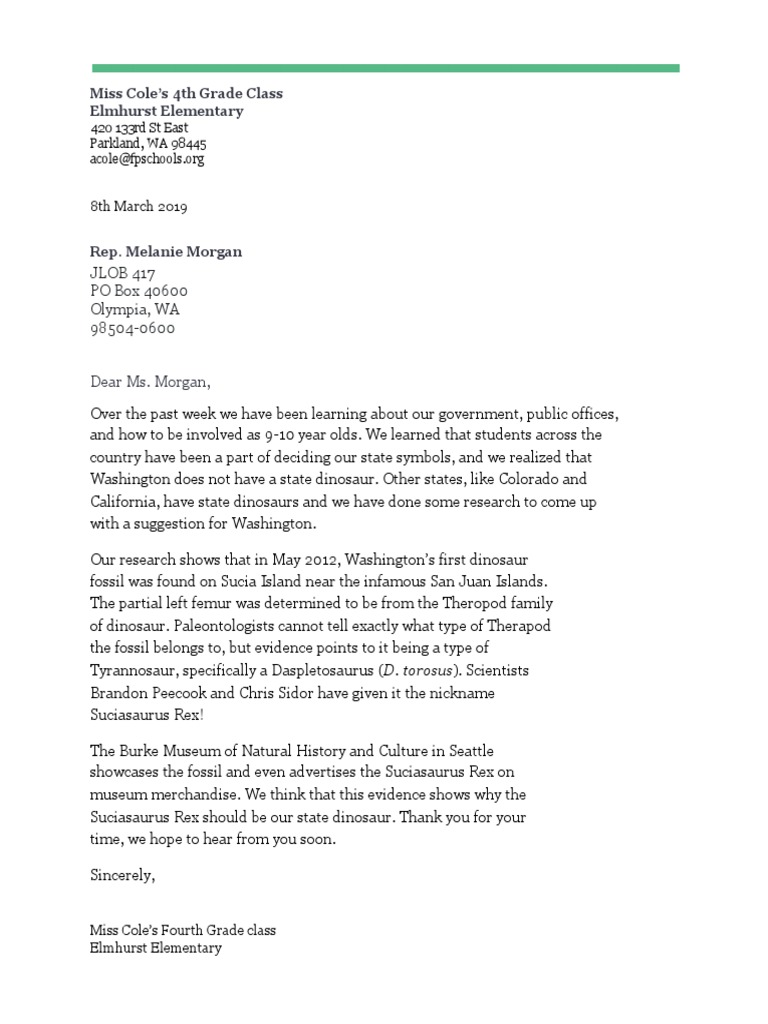 Letter to Rep. Morgan (1)
A letter from Amy Cole's fourth grade class to Rep. Melanie Morgan, arguing their case for a state dinosaur.

It was enough for lawmakers to draft a bill proposing the idea.

It's unclear whether the bill will get a hearing during the current legislative session or next. It was introduced after the March 13 cutoff day to pass bills in their house of origin if they are not necessary to budget implementation. However, a spokesperson for the House Democrats said it could still get a hearing.

It's possible Cole's fourth graders will have a reason to have a prehistoric-themed celebration in fifth grade.