Oso tree cut down, but not community's strength

A tree that survived the Oso landslide more than three years ago came down. The wood will be repurposed for a permanent memorial. 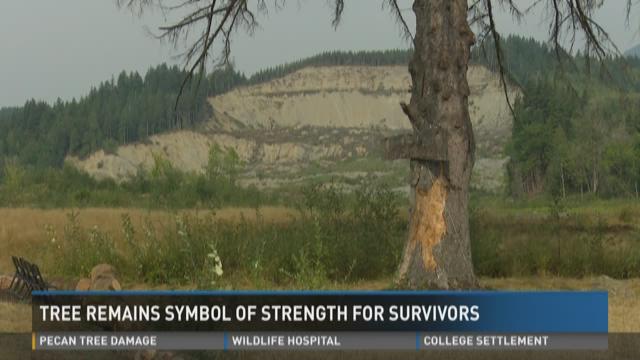 A symbol of strength -- that's what a tree in Oso meant to its community members. It was one of the only things left standing in the path of Oso landslide more than three years ago.

“Oh, I feel it. Every time I come up, I feel it. The adrenaline – just to be present here,” survivor Ron Thompson said.

Thompson goes to the sacred tree and slide area every other day to water the 80-foot spruce and 43 memorial trees nearby, one for each person who died during the March 22, 2014 slide.

“It was a beautiful tree. It was unlike any tree in the area,” said Chad White, of Evolution Tree Experts, the company donating its tree-cutting services. “I was definitely really surprised it took the blow.”

Survivors, victims’ families, and first responders said their goodbyes to the tree on Saturday afternoon after its 100-year-old root system finally gave way to the effects of the slide.

“It’s pretty much symbolic of our community. Everybody worked together on this,” White said.

The wood will be used for a permanent memorial.

Community members, however, say their memories of mother nature’s destruction won’t fall with the tree. Snohomish County Parks says there are at least 10 saplings below it ready to grow new memories.