A 19-year-old man was killed in an overnight shooting Saturday inside the Capitol Hill Organized Protest zone or CHOP, and a second person was critically injured. 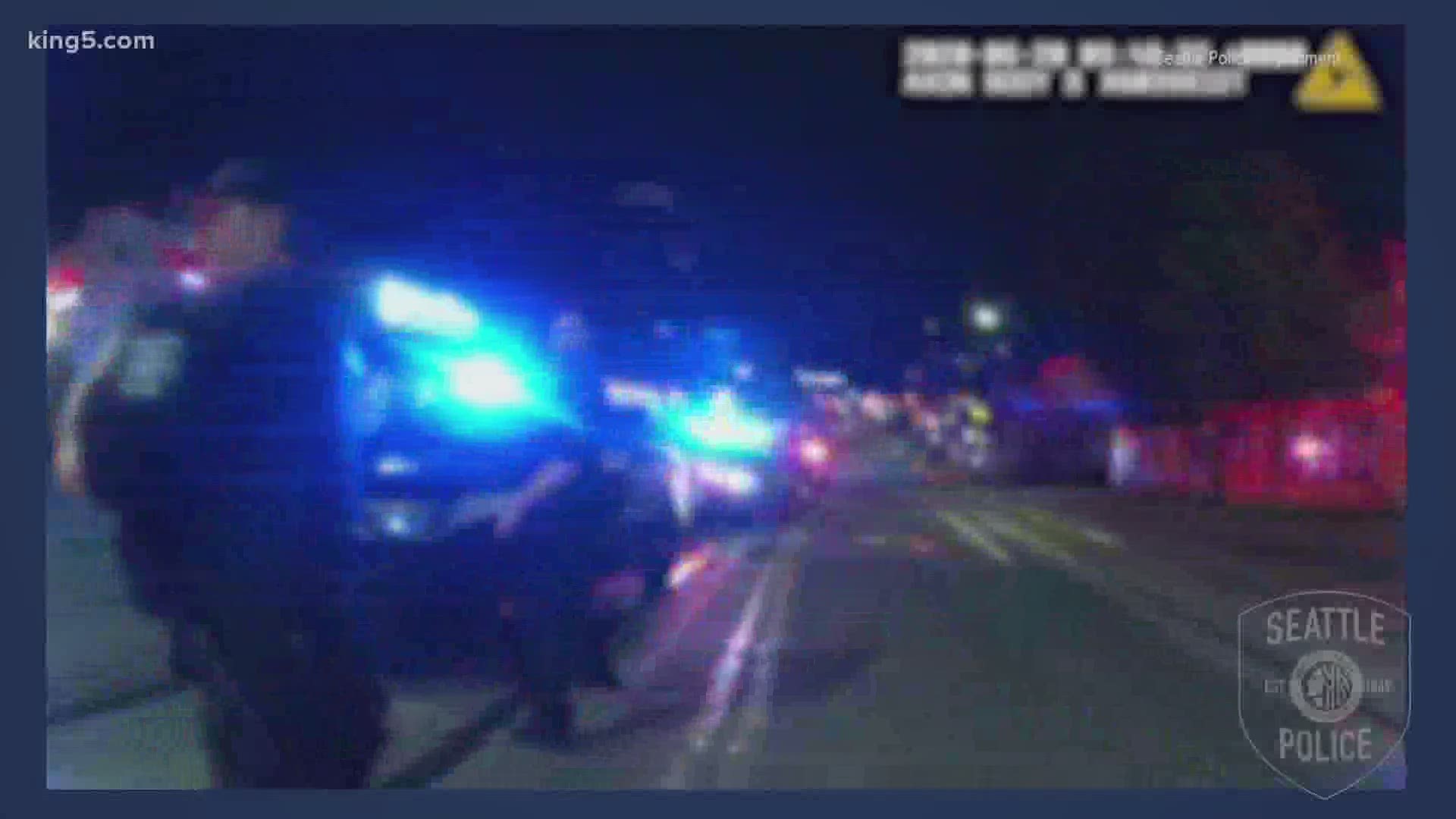 SEATTLE — Seattle police are investigating a shooting that left one person dead and another critically injured inside Seattle's so-called "CHOP" or Capitol Hill Organized Protest zone.

The 911 calls to report shots fired in Cal Anderson Park, near the intersection of 10th Ave. and E. Pine Street started coming in at about 2:19 a.m. Saturday, according to city of Seattle officials.

At 2:25 a.m., Seattle Fire Department medics responded and were awaiting Seattle police to secure the scene before going into the CHOP, which is standard procedure for the fire department. Seattle police arrived at about 2:28 a.m. but weren't able to get inside the CHOP zone.

Police tried to find the shooting victims but were met by a "violent crowd" that prevented the officers from safely accessing the victims, according to a release from Seattle police Saturday.

Alex Bennet was walking her dog early Saturday morning when she came across one of the victims.

"I saw one gunshot wound on his arm so I took off my sweatshirt and tied it around his arm above where the gunshot wound was so I could make a tourniquet to try and keep the bleeding down," explained Bennet, who used to be a nurse.

She said she and CHOP medical crews tried to help and someone called 911, but they were told paramedics couldn't come because police were being blocked from entering the area. 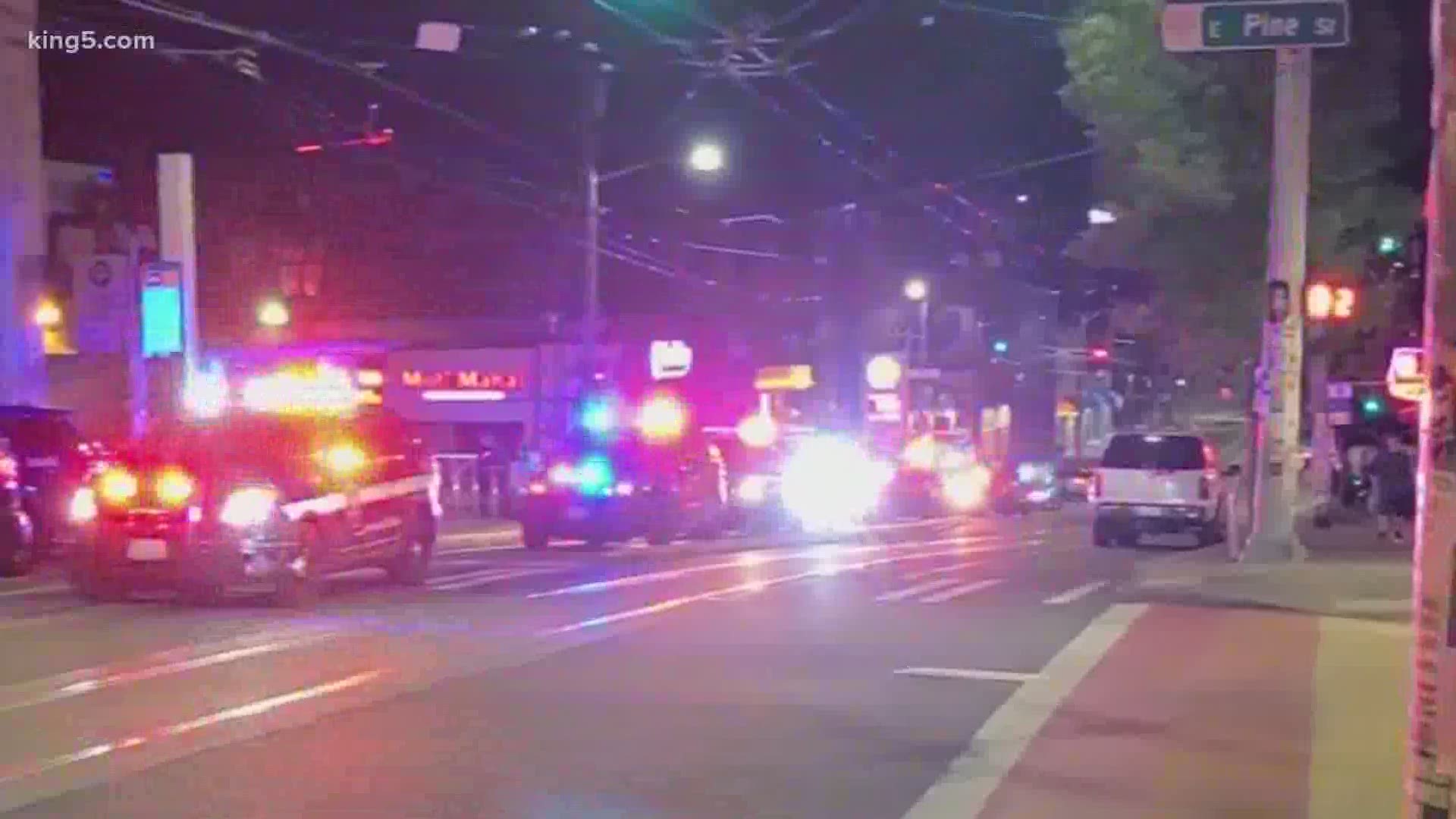 That's when CHOP medics brought in a van and Bennet helped them get the man inside so they could take him to the hospital.

"I finally was just like he is just really going into shock I need a few guys to help me we're just going to lift him up and we picked him up and got him into the back of the van," said Bennet.

Bennet said she supports the protests but thinks precious time was lost during the incident.

Organizers of the CHOP sent a statement to KING 5, that said in part no one official was denying Seattle police or fire entry to the area.

"No one within the CHOP denied entry to PD within any organizational capacity. Officers deciding on their own not to enter an area is not the same as being denied entry," read the statement. "We as safety teams are peacekeepers, not police. We do not want to be homicide detectives, or CSI, or accessories to this murder. We still want what we wanted from day one, justice for all."

Seattle Fire said its crews aren't trained to go into a "volatile situation" to get patients so they have told people to go to the outside of the crowd to get treatment.

"This was a scene where the risk was too high to commit our crews to respond in without a police escort," Seattle Fire spokesperson Kristin Tinsley said in a statement.

To speed up medical treatment, the fire department said it loaned two sets of a wheeled stretcher and basic medical supplies to volunteers Saturday night. It also pre-designated a location where fire crews can meet volunteer medical staff to pick up patients outside the CHOP boundary.

In the statement, organizers said the people involved in the shooting may have a previous history and "the situation escalated because of gang affiliations." However, the involvement of gangs in the shooting has not been confirmed by police.

Seattle police have not released information about what led up to the shooting, or any suspect descriptions. At this time, no one is in custody.

Seattle police are asking anyone with information about the shooting, or who may have video, to contact the Seattle Police Department’s Violent Crime tip line at (206) 233-5000.

Maryellen Donnelly lives across the street from where the shooting happened and heard the gunshots. She said she's begged lawmakers to intervene for everyone's safety.

"We need help, we live here, we need to not be ignored, there needs to be a dialogue. I think the initial protest has gotten lost," said Donnelly.

The CHOP area extends on E. Pine Street between 10th Ave. and 12th Ave. right across from Cal Anderson Park.

The area has been occupied by protesters for weeks demanding racial justice and police reform in response to the death of George Floyd, a black man who died while in Minneapolis police custody in May.

Saturday's deadly shooting occurred less than a half a mile away from Seattle Police Department's East Precinct, which has been left abandoned and boarded up since protesters took over the area.

The shooting is not the first violent incident that's occurred in the area. On June 7, a Seattle man was accused of driving through a crowd of protesters and shooting one of them. That man has since been charged with felony assault and is awaiting arraignment.

RELATED: Man shot while defending others at Capitol Hill protest is focused on bringing change