With new restrictions in Washington being more severe than those in Idaho, cities near the border are preparing for an increase in Washington customers. 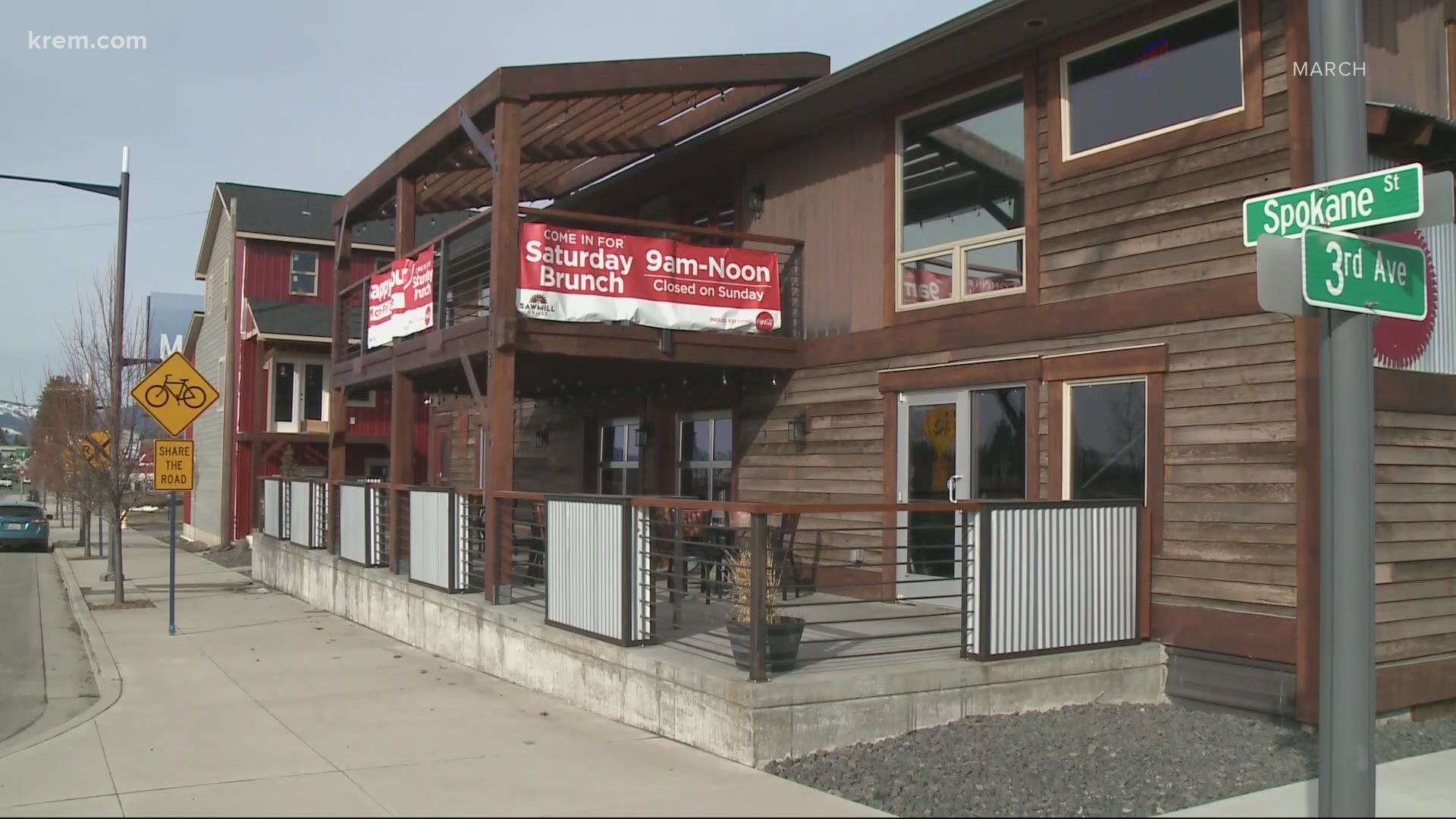 POST FALLS, Idaho — With dining rooms in bars and restaurants slated to temporarily close in Washington due to the COVID-19 pandemic, some North Idaho leaders are anticipating that some Washingtonians will head to Kootenai County to enjoy fewer restrictions.

While Washington Governor Jay Inslee over the weekend ordered that indoor dining in the Evergreen state be halted for roughly four weeks to slow the spread of coronavirus, dining rooms in Idaho remain open.

Idaho Governor Brad Little last Friday downgraded his state to the second phase of the Idaho Rebounds plan, but allowed bars and restaurants to remain open with seating only. Little's statewide order continues to direct restaurants to adopt cleaning and social distancing protocols.

Post Falls Mayor Ron Jacobson said he wouldn't be surprised if the current restrictions in Washington drove some Spokane County residents to head to his city to eat or shop.

"Where we are in Post Falls, we're going to always see some Washingtonians coming over," Jacobson said. "Now, it's just a matter of what kind of increase we'll see. I would expect that there would be some, but I don't know to what extent."

The Post Falls Police Department has also commented on the trend  of people from Washington crossing the border to escape COVID-19 constraints.

"Because of our neighboring state, we do see a lot come and enjoy the benefits of the lesser restrictions in the state of Idaho," said PFPD Captain Greg McLean before the Post Falls City Council last week. "I spoke to a few of the facilities that manage banquets, and they're up 25 percent with Washington individuals wanting to have weddings, banquets, trainings and so forth."

RELATED: Over 300 people who attended Ritzville wedding may have been exposed to COVID-19

Rob Clark, then-owner of the Saw Mill Grille, told KREM that business at his restaurant increased roughly 30 percent following restrictions put forth by Washington at the time. On one day, Clark said, over half of his customers were from the Evergreen State.

While Jacobson said he expects there to be an influx of Washington residents heading to his city, he noted that at least one local business told him they're expecting Idaho's regression into Phase Two of the state's reopening plan to hamper their business.

"I think the business is there to be had, but I think that the social distancing and the limitations on the size of gatherings is going to have an impact," said Jacobson.

As part of Little's latest order, both private and public gatherings of more than ten people aren't allowed. Both churches and schools are exempt from the order.

While the Post Falls City Council opted to not require face masks in their city on a 4-2 vote last week, Jacobson maintained that he would have voted for a mask order had he been in a position to cast a tie-breaking vote.

"I think it's important that we keep people safe, but I want to keep business open, churches open, kids in school, and I want to provide some assistance to the hospital," said Jacobson. "I try to do what I feel is best and understand that no matter what that is, I'm probably going to irritate about half the people."