After all the news surrounding the bored tunnel under Seattle, one of the most revolutionary aspects of the project is a bridge now being assembled near the south entrance - a bridge that is designed to be earthquake proof. 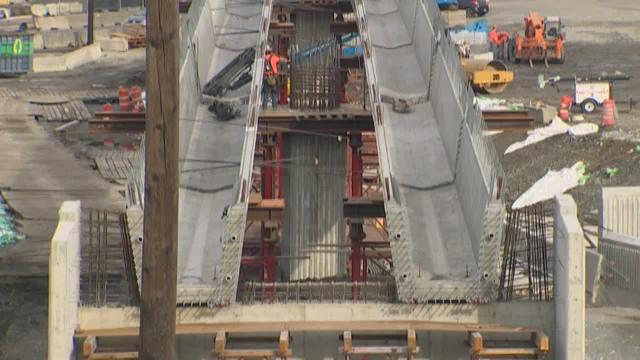 SEATTLE- After all the news surrounding the bored tunnel under Seattle, one of the most revolutionary aspects of the project is a bridge now being assembled near the south entrance - a bridge that is designed to be earthquake proof.

The bridge will take traffic from northbound State Route 99 off and into the city. As drivers cross it, they will not see any significant difference between this bridge and any one of hundreds of new concrete structures built around the United States.

This bridge is made largely of the same materials, such as concrete, rebar and pre-stressed concrete beams holding up the road deck. However, on this bridge, it's the connective tissue, the joints, where the quake-proofing comes in. The joints are designed to be flexible. Reinforcing bars made from a special metal alloy will hold their shape, snapping back to their original position when the stress and movement of the earthquake are over.

“In the future, we can design for no damage, immediate use,” said Tom Baker, who heads bridges and structures for the Washington State Department of Transportation. “Not only by emergency vehicles, but commerce, the public. If that comes through, that’s a giant leap forward.”

“Once you let it go, it goes back to its original place, as though nothing has happened,” said Saiid Saiidi, a professor of civil engineering at the University of Nevada, Reno. He works in the Department of Civil and Environmental Engineering.

Saiidi has come to quake-vulnerable Washington to try out what he says so far has proven itself in the laboratory. There are two basic parts to it.

“It’s what we call engineered, cementitious composite,” said Saiidi. This bridge is the first full test of his idea.

The entire bridge doesn’t need to be made from this combination of low crack concrete and shape holding metal alloy, just the top 5 feet of the columns that support the beams and the bridge deck. The special concrete, which has to be made in small batches, is filled with millions of poly-vinyl fibers. Those fibers are coated to bind with the concrete around it and limit cracking.

“It does not crack easily, and it’s able to develop tiny cracks vs. large cracks,” Prof. Saiidi said.

The idea is to do what other bridges do not: lose the structural integrity of concrete that holds up the bridge. That ability for a bridge to hold itself together can depend on the degree of shaking, and if strong enough it, can crumble and lose its ability to support the road above.

Current concrete bridge designs have changed. Concrete columns used to be built with only vertical rebar. Those vertical bundles of rebar are now surrounded by a wrap of thinner rebar that keeps most of the broken concrete from falling out. While the column would become a contained pile of gravel, that should keep the bridge from collapsing outright, as seen in the 1989 Loma Prieta earthquake in northern California, where some bridges suffered outright out structural failure.

The new bridge design is intended to go back into service immediately after a post-quake inspection.

The other piece of this bridge’s design is the use of that metal alloy, a combination of two elements, nickel and titanium.

“With this bar, it bends out, then comes back,” said Prof Saiidi.

A five-foot bar could be stretched five or six inches and return to its previous length, he adds. While somewhat flexible, once steel rebar is deformed, it holds that shape.

The material is expensive and, at current prices, would add five to seven percent to the cost of the structure, a price expected to drop if the materials become widely used, says Saiidi. But he adds that costs of an earthquake can go well beyond the extra price paid for a flexible bridge.

“The place can function. We don’t have to shut down traffic, we don’t have to have detours, traffic congestion,” Saiidi said, about a world where such bridge would be commonplace.

Often, the focus on earthquake resistance is about survival, which goes back to the current design ideas about bridges that don’t collapse but will never carry traffic again. The new bridge, if widely adopted, would show earthquake resilience, not only the ability to ride out the quake, by allowing the economy and society to recover far more quickly.

WSDOT will watch the bridge closely, examining if the concrete will hold up to wear and tear and the weather as predicted. Saiidi vows to continue studies in the lab and is receiving other inquiries. The ultimate test will come in the next earthquake, whenever that is.

Baker says retrofitting this technology into existing bridges is a possibility, but has major challenges.

“The vision is really quite exciting,” said Baker of WSDOT. “And for people involved with engineering, (it will) change the paradigm on earthquakes.”