'Never been done': Light rail over I-90 floating bridge is an engineering feat

Sound Transit said the East Link light rail project is on schedule despite having to accommodate construction for weather and sea conditions over Lake Washington. 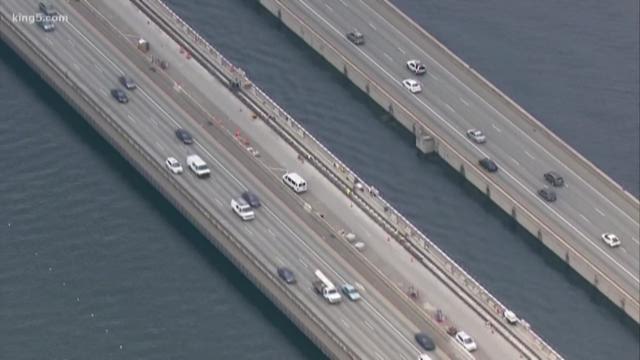 MERCER ISLAND, Wash. — The East Link light rail project, which expands service in 2023 to Mercer Island, Bellevue, and Redmond, is on-schedule despite having to clear a major hurdle: Lake Washington.

Drivers crossing the I-90 floating bridge are met with rails and beams where the old express lanes once were.

“This has never been done anywhere else in the world, where we have taken light rail from a fixed bridge onto a floating bridge,” said John Sleavin, Sound Transit's deputy executive director.

The I-90 bridge is designed to flex and twist in response to rising and falling lake levels, heavy traffic, wind and waves.

It’s generally not a problem for vehicle traffic, but building a rail line on that surface requires an added layer of precision and planning, Sleavin said.

With that in mind, Sound Transit designed and built a unique set of track bridges which are engineered to compensate for lake motion, allowing trains to glide safely along on level track.

“We had to invent this system,” Sleavin said.

Sound Transit assembled a mile-long section of its bridge track at a rail test facility in Pueblo, Colorado, where they engineers ran it through tests, Sleavin said.

“Steel can flex as long as you do it over a long enough distance,” he said.

To build the new light rail line, WSDOT permanently closed the I-90 express center traffic lanes two years ago, squeezing those cars and trucks into the existing roadways. WSDOT added new HOV lanes in each direction.

Sound Transit said the new light rail line, called the Blue Line, will carry commuters from Bellevue to downtown Seattle in 24 minutes, Mercer Island to the University of Washington in 20 minutes, and South Bellevue to SeaTac airport in 50 minutes.