Piles of trash have taken over acres in a Spanaway community at 19912 Mountain Highway East.  Pierce County has labeled the neglected field “hazardous” as code enforcement officials say they have tried to contact the property owner to get it cleaned up. 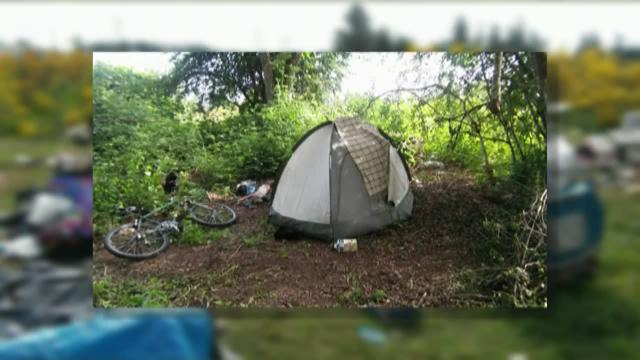 Piles of trash have taken over acres in a Spanaway community at 19912 Mountain Highway East. Pierce County has labeled the neglected field “hazardous” as code enforcement officials say they have tried to contact the property owner to get it cleaned up.

"It's an everyday problem, and we have to know what's going to happen, and it's been going on for so long it never seems like there's an end in sight," said Adam Kies, who lives in the neighborhood.

But it’s more than just trash. There is a growing community of homeless people living in tents on the property.

‘There’s a lot more people now than there was before,” said Loliene Johnson, who said she used to be to homeless and lived on the field. “The police do come back here quite a bit because the neighbors are complaining."

Neighbors Kies said he doesn’t let his kids play outside of their front yard.

"My kids have friends that live in these neighborhoods, and I don't feel safe letting them ride their bicycles."

Kies and other have created a Facebook page about the property and contacted Pierce County to try to get the property cleaned up, but Kies said he understands it's complicated.

"Just kicking them out of here it solves my problem, but it doesn't solve their problem all you do then is push them somewhere else," he said.

"Some of my friends have been out here for so long this is all they know. Taking them back into society is going to take a minute because they don't know how else to live in society again or work again.”

Johnson also said homeless people aren’t the only ones to blame for the trash.

"There's a lot of garbage out here, but there are people who come out here and dump all the time," she said.

A spokesperson for the county said code enforcement has already sent out one notice to the landowner; they plan to send out a second notice Thursday. The county says once it’s issued all their notices and if the property owner is not responsive, they must get a court order to get permission to go on the property and clean it up.