A hygiene station was put at the Junction Plaza Park in May to help people in need during the pandemic. But neighbors say the addition has led to more violence. 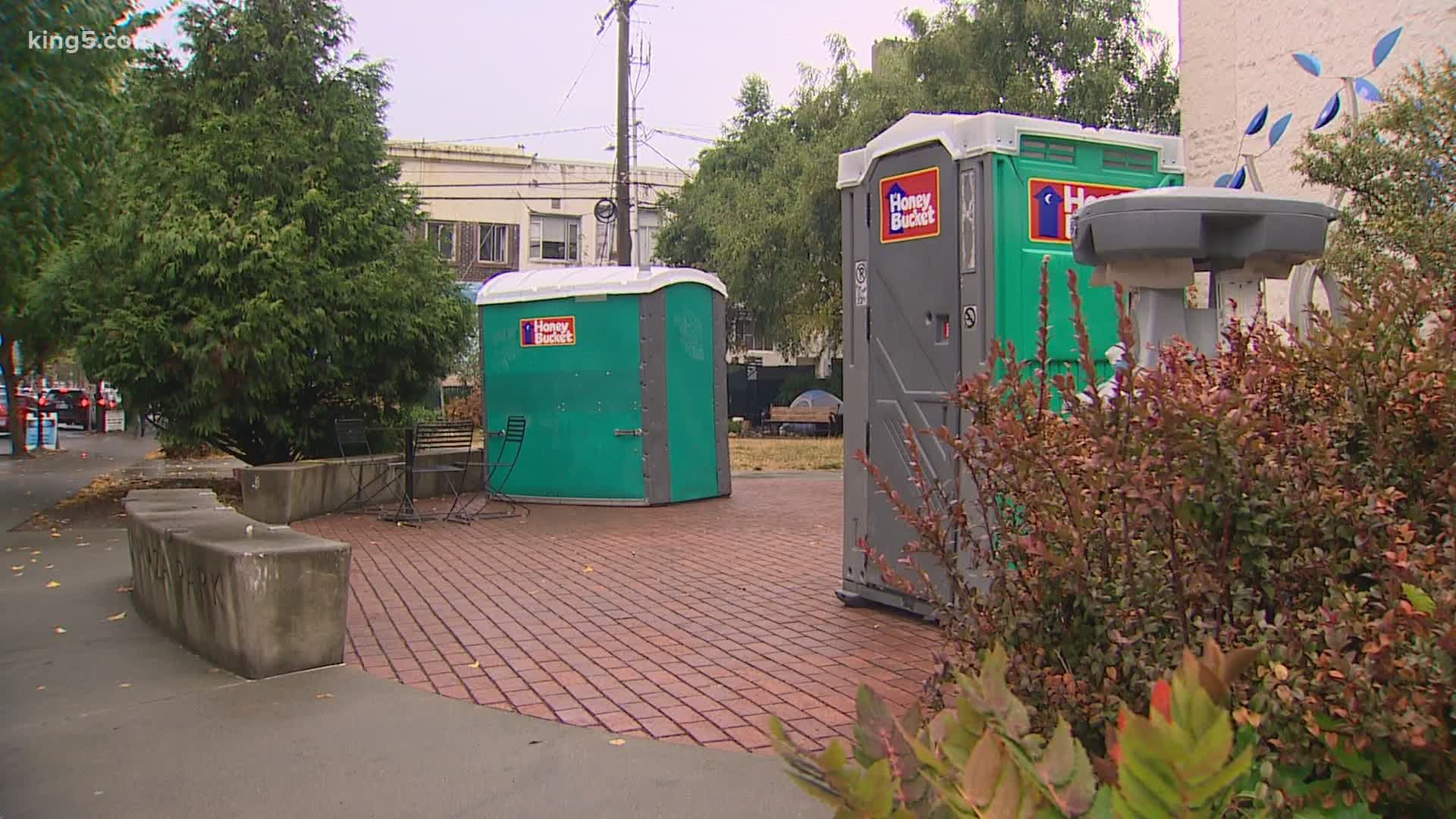 SEATTLE — West Seattle residents say they’re frustrated with what they believe is an increased danger near a hygiene station set up at Junction Plaza Park.

“My husband and I were just having a piece of coconut pie across the street, and we saw two people get into a fistfight in the middle of the road,” she said.

Radford said several businesses and neighbors have voiced concerns on a new website she launched to bring awareness.

“I started the website as a way to direct the comments and the concerns of our community into the right path,” she said.

The website says, "The Junction (group) is actively involved starting conversations with the Hygiene Station team around the escalating violence and drug use in the park. We are focused on advocating for a responsible approach to re-imagining mental health services and policing to keep every person safe in our city."

The city placed the station there in May as a response to the coronavirus pandemic, to help minimize the spread. The city owns the park property and said there was a noted need for publicly-accessible hygiene solutions in that area. Radford said, despite reaching out to the city’s human services department multiple times, she’s gotten little response.

“Number one, they asked us to stop emailing… We won't. And number two, they said that their communication teams were getting together and writing this letter,” she said.

Radford said they’ve seen an increase in violence and violent behavior since the station arrived. Seattle police report there have been 414 calls for service this year in that general area of West Seattle, but said the numbers do not reflect an increase of crime so far.

The city shared a statement about the station, which said, in part: "Seattle Parks and Recreation staff and Seattle Public Utility contractors clean and service the Junction Plaza Park Hygiene Station three times a day, addressing any trash or litter and ensuring the facilities are in working order." Read the city's full statement below.

Radford thinks the issue isn’t the station itself, but rather the activity it attracts -- and believes the city should do more in terms of offering help.

“You also need to make sure that you have the adequate number of drugs and mental health counselors that are wrapped around that area, because that’s who really needs the help, the people using that station,” she added.

This isn’t the first time the city has gotten pushback over public restrooms.

In 2004, the city installed 5 high-tech toilets around Seattle, with the idea of having a safe place for tourists or those battling homelessness to use a restroom.

It cost the city $5 million -- and it didn't pay off. Reports of crime, drug use and malfunctions ultimately led the city to sell them. Fast forward and now the city has launched hygiene stations to help those in need during the pandemic.

In a statement, the city’s Human Services Department said they are aware of the complaints and are working with the city's Navigation Team to address them.

Greg Hawk owns a marketing company with an office near the park.

“I was homeless for years,” Hawk said.

He said coming from the side of being homeless, he believes most of the recent problems are a result of the pandemic.

“I totally discovered it's because everything is closed, and that’s what causing all the problems. And I don’t think that’s something everyone is thinking about,” he said.

Hawk said while he agrees and understands neighborhood concerns, he thinks the violent incidents are more likely one-offs and he challenges his fellow community members to be more understanding.

KING 5 reached out to the Seattle Police Department about the perceived increase in crime. SPD Det. Patrick Michaud shared the following graphic and explanation:

"The Attached graphic shows 414 reports of crime this year in that one area, with a slight increase in July which happens throughout the city as well and not really a sign that anything happened. So while the perception that crime is up, the reality is that we don’t have the numbers to back this up. That being said, If people believe the are witnessing a crime they are always encouraged to call 911.  That way we can at the very least track crime trends which will inform how we use our limited resources."

Read the full statement from the City of Seattle:

"This past May a hygiene station, including a handwashing station and two sanicans, one of which is ADA accessible, were placed in Junction Plaza Park to provide unsheltered neighbors living in the area access to hygiene services to help prevent spread of  COVID-19. More information on these citywide hygiene efforts can be found on SPU’s blog.

This particular location was selected because it's City property and is in an area with recognized need and a lack of clean, publicly accessible hygiene services. Hygiene stations are continually monitored to ensure that they are meeting the intended need of the surrounding area.

Seattle Parks and Recreation staff and Seattle Public Utility contractors clean and service the Junction Plaza Park Hygiene Station three times a day, addressing any trash or litter and ensuring the facilities are in working order.

The City is aware of the concerns raised by members of the community regarding incidents near the park and the Navigation Team will be working with City contracted outreach partners to engage individuals living unsheltered in the area.

Starting on March 16, in response to the COVID-19 outbreak, the Navigation Team has made over 600 site visits for outreach, conducted over 1,000 litter and debris mitigation operations, and made over 520 referrals to shelter.  This work is ongoing.

We are committed to serving the needs of the unhoused, housed and business communities as we work to meet the challenges of the COVID-19 crisis."