An Eneregy Northwest employee said the pattern of errors means something important is going "very wrong." 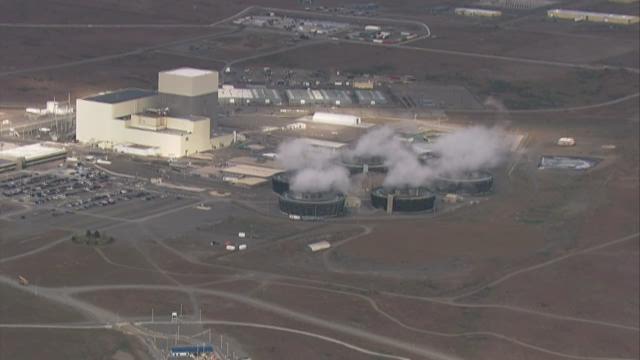 Internal documents obtained by the KING 5 Investigators reveal that the Columbia Generating Station, operated by the publicly owned Energy Northwest, made repeated errors in its shipping of radioactive waste, in violation of state and federal regulations, dating back to 2014.

“There have been multiple deficiencies with the shipments of radioactive waste which has resulted in noncompliance with Federal, US Ecology, and State of Washington requirements,” wrote Robby Peek, Energy Northwest Quality Services supervisor in a July 26 interoffice memo.

Peek characterized the problems as “significant” and wrote the pattern of errors has led to a “loss of regulatory confidence.”

“Additionally, incorrect details within the shipping manifest can increase risk to the health and safety of the public,” wrote Peek.

The most recent event caused the DOH to revoke the plant’s shipping rights for the third time in the last three years.

A July 26 letter from the DOH to Energy Northwest outlines what led to the temporary ban. Inspectors at the state’s low level radioactive waste dump found a July 20 shipment of waste was far more radioactive than what was listed on the shipping manifest.

“Inspections of your shipment revealed (violations) of the US Ecology Radioactive Materials license…and the Washington Administrative Code,” wrote Kristen Schwab, DOH Office of Radiation Protection waste management supervisor. “Because of the nature of the violations found in this shipment, authorization to use the commercial low-level radioactive waste disposal site by Energy Northwest has been suspended indefinitely.”

The Columbia Generating Station (CGS) is located approximately 10 miles outside of Richland on land leased at the Hanford Site. Although located on the same reservation as the former defense nuclear weapons factory, the power plant is not affiliated with Hanford. CGS has been producing electricity utilized throughout the Northwest since 1984.

“The driver was given the wrong manifest,” said Paoli. “First and foremost, there is no public health or safety issue now.”

The interoffice memo authored by Peek called for an immediate “Stop Work Order,” meaning all shipping of radioactive materials off site must cease until certain corrective actions are taken. The Stop Work is in addition to the state’s action and is a highly unusual step for the company to take. Peek described 12 separate shipping deficiencies from October 2014 to July 2017.

“Corrective actions taken to date have been ineffective at preventing recurrence,” wrote Peek.

The most serious violation occurred in November 2016 when federal regulators from the Nuclear Regulatory Commission (NRC) issued a “Notice of Violation” after contaminated filters arrived at the state’s dump measuring a radiation level seven times greater than what was listed on the shipping manifest. The dump is also located on the Hanford Site. That violation set off a series of inspections and additional NRC oversight. It also made the CGS one of only 14 plants out of 99 across the country on the NRC watch list.

“You would think they would have learned their lesson and made corrections considering they just were cited by the NRC and spent several months fighting the NRC over additional oversight over this very same issue,” said Chuck Johnson, director of the Joint Task Force on Nuclear Power at Physicians for Social Responsibility. Physicians for Social Responsibility is a long-time critic of nuclear power.

Nuclear policy expert Robert McCullough reviewed documents related to the shipping errors for KING 5. McCullough has advised Congress and the Department of Justice on energy issues for many years. He said the July 20 incident by itself doesn’t appear to pose any risk but the totality of problems dating back to 2014 is of concern.

“The good news is, as far as I’ve seen, none of these things are immediately dangerous but the bad news is we’re getting quite a list of them, and it’s time to take a good hard look at what we are doing there,” said McCullough. “We’re reaching that point where we’re seeing enough of these problems we’ve begun to worry if the plant is being sufficiently maintained.”

It’s no secret the CGS has been under pressure to cut costs. McCullough said understaffing is most likely to blame for the pattern of errors.

“My experience with the nuclear plant is the staff is very competent. However, they’re in cost reduction mode so this would indicate to me that this particular department has lost staff and the remaining staff are unable to keep up with the administrative load,” said McCullough.

A veteran Energy Northwest employee who did not want to be identified for fear of retaliation said the problems can be traced to the company’s top officials.

“This is a leadership issue because it is a repeat problem,” said the employee. “Stop work orders are very rare and very serious. It means something that is important is going very wrong. That should show that this is a systemic issue that leadership can’t fix for whatever reason.”

Even seemingly small errors take on new meaning at nuclear power plants because the stakes are so high. The worst-case scenario is a Fukushima-like event when an earthquake and tsunami led to a nuclear power plant meltdown, explosions, and the spewing of radioactive material in 2011.

“Now we don’t think that’s going to happen. We think we run plants well. We think we have lots of precautions but what we’re seeing here is the beginning of a flag that we don’t have enough precautions,” said McCullough.

Energy Northwest’s Paoli underscored how safe the CGS is. He said the nuclear industry has the best track record of any other energy producer, such as coal and hydropower.

“The nuclear industry has the safest record environmentally and with regard to industrial safety than any energy industry in the United States or in the world. There’s a reason we’re the safest industry – because we take these things seriously,” said Paoli. “We’re not shipping toys down the road. This is serious business for us.”

The DOH said the suspension of shipping rights could last approximately 45 days.

“If you wish to reestablish (dump) site use privileges, you must allow a point-of-origin inspection conducted by the state of Washington, with all expenses paid by Energy Northwest,” wrote Schwab. “The department is also requiring you to participate in a management meeting…after receipt of your root cause investigation and description of corrective actions….If no response is received within 90 days, your site use permit will be terminated.”