The deadliest volcanic eruption in U.S. history happened in Washington state on May 18, 1980 when Mount St. Helens blew her top. 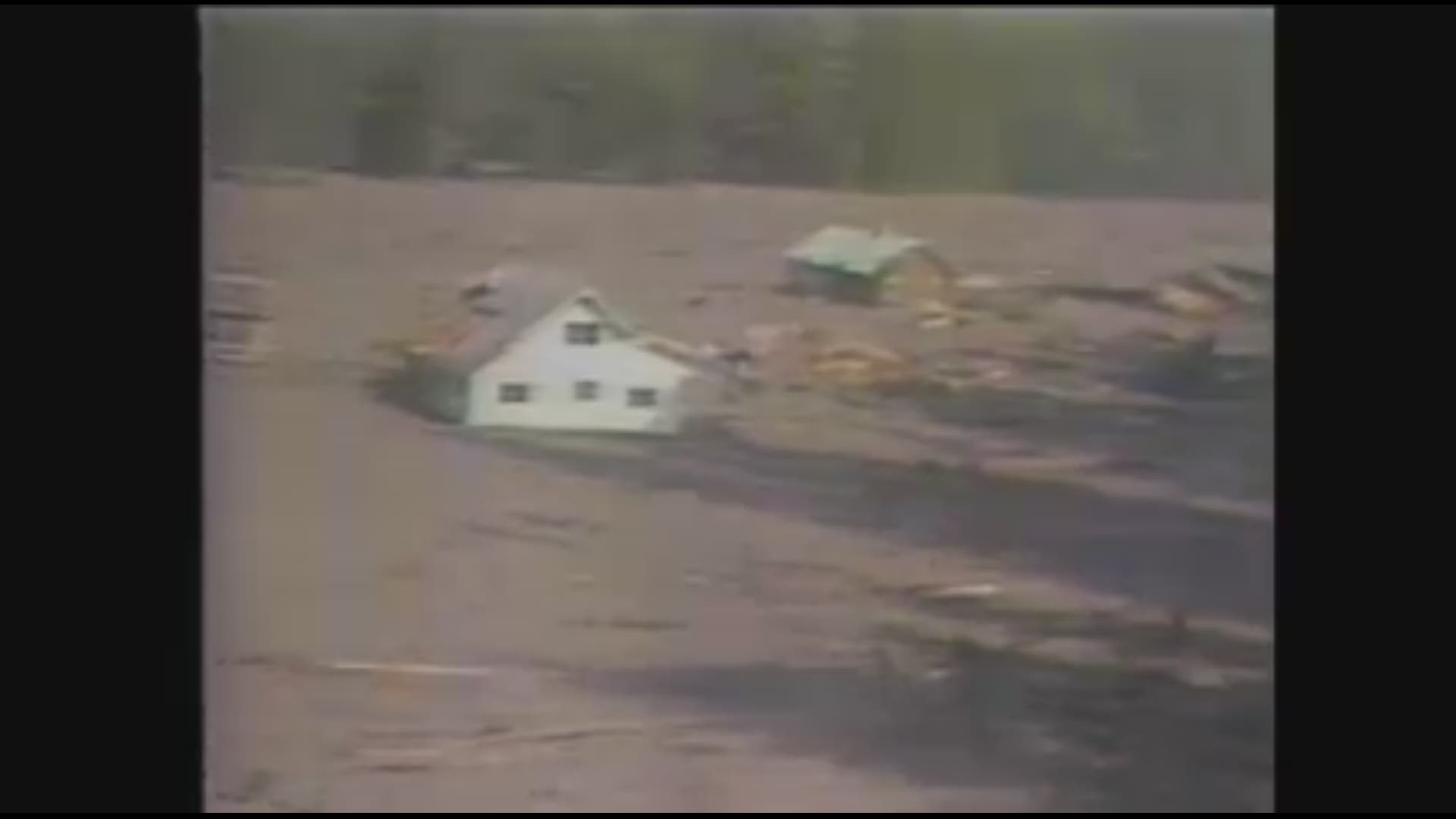 On May 18, 1980, Mount St. Helens erupted in Washington state, spewing ash, rock, and hot gasses into the air, and rocketing mud and timber down the mountain.

The eruption happened at 8:32 a.m. and was "the deadliest and most economically destructive volcanic event in the history of the United States," according to the National Oceanic and Atmospheric Administration.

The eruption killed 57 people and caused more than $1 billion dollars in damage. Ash blanketed the Pacific Northwest and stretched into 11 states and Canada. Fatalities included photojournalist Reid Blackburn, a USGS volcanologists named David Johnston and Harry Truman, a lodge owner in his 80s who rose to fame after he refused to leave the mountain in the weeks preceding the eruption.

Autopsies showed that most of the people killed in the eruption likely died from asphyxiation after inhaling hot ash, according to the USGS.

Truman, who owned a lodge on Spirit Lake for more than 50 years, gave colorful interviews to the press.

"I'm going to stay right here because, I'll tell you why, my home and my (expletive) life's here," he told National Geographic in an interview before the disaster. "My wife and I, we both vowed years and years ago that we'd never leave Spirit Lake. We loved it. It's part of me, and I'm part of that (expletive) mountain," he said.

Related:  A closer look at the lives lost in the Mount St. Helens eruption

Carmen R. Andrews shares incredible photos from the eruption and describes the scene: "When I was 14 years old, my classmates from Garfield High School and I went on a biology field trip to see the diatomaceous earth outside of Vantage, Washington. We actually heard the eruption as we were packing up to go home but it wasn't loud enough to really register as something big at the time, and it was only later that we realized that we actually heard it when the volcano erupted."

In 1980, KING 5's Rich Marriott was a meteorologist for the Forest Service Avalanche Center. He flew with an NBC crew days after the blast to document the destruction.

"The blast from the Mount St. Helens eruption scorched the surrounding landscape for nearly 20 miles. The direct blast obliterated everything for a distance of eight miles. The shock wave toppled trees in the intermediate blast zone, and you could see burned trees that were left standing in the outer seared zone.

It seemed like we were flying into hell, not somewhere in the Cascades."

Mike Ward was a charter pilot flying out of Portland. He was one of the first in the air after Mount St. Helens blew.

"There were, of course, those house size boulders, the lightning that could fry our radios, the ash that could stop our engines and the possibility of a midair collision in that initial frenzy. At no point did I ever consider the possibility of a secondary explosion which, on the scale of the first event, could easy have swatted all of the airplanes from the sky. Like I later told friends, I was too stupid to be scared."

KING 5 photojournalist Mark Anderson, who was at the mountain minutes before it erupted, shares his story from that day. 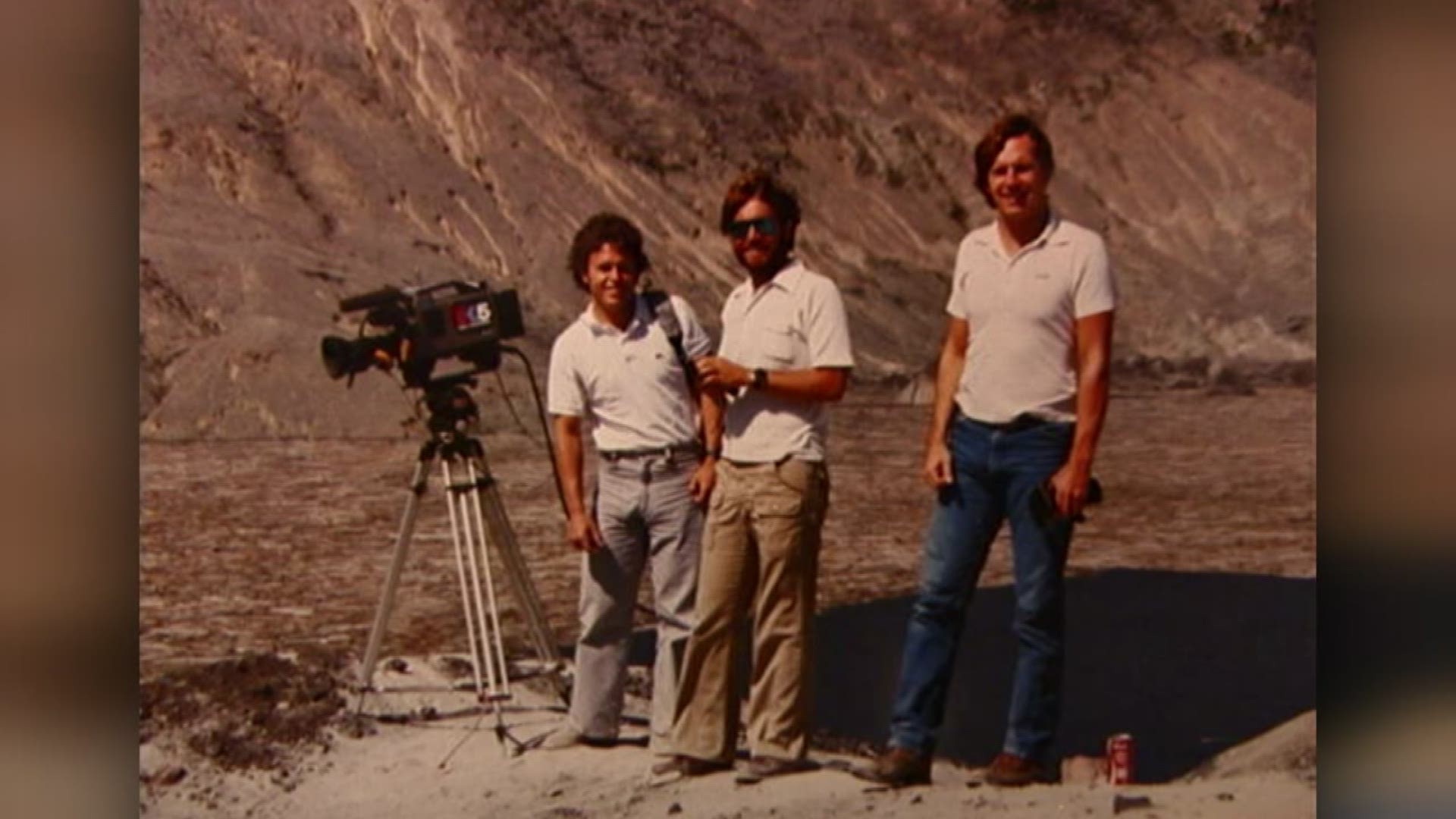 Where were you when the mountain erupted? Share your memories and photos on the KING 5 Facebook page or email your photos or footage to shareit@king5.com.

The first sign that Mount St. Helens might erupt occurred on March 20, 1980, when a magnitude-4.2 earthquake caused snow avalanches to occur on parts of the volcano, according to the U.S. Geological Survey. Between then and May 18, there were more than 2,800 earthquakes recorded at the volcano, and a bulge began to develop on the volcano's left side, PBS reported.

A 5.1 earthquake on May 18 rattled the mountain, causing the bulge to burst and landslide down the mountain. Once the bulge was gone, the volcano's magma system was depressurized and blew off the top of the mountain, according to the USGS. The blast reduced the mountain's height by 1,314 feet.

Washington state worked to remove about 900,000 tons of ash from highways and roads, according to the USGS. The International Trade Commission determined the total cost of damage and rebuilding efforts from the eruption came to an estimated $1.1 billion.

The eruption damaged roughly 230 square miles of land around the volcano, according to the USDA Forest Service. It destroyed 158 miles of highway, 200 homes and 15 miles or railways, the USGS reported.

In addition to human lives lost, an estimated 7,000 big game animals – such as deer, elk, and bears – were also killed. Birds and small mammals also died.

The first animals to return to the eruption area were spiders and beetles. They were found at the site in late May of 1980, according to the USGS.

In 1982, the federal government set aside 110,000 acres of land impacted by the eruption known as the National Volcanic Monument. The land within the monument is protected and was allowed to naturally rejuvenate and restore itself.

NASA tracked changes in the blast zone using satellite images from 1979 to 2013. The images show the land growing greener each year. The regrowth process continues to this day, according to NASA. Early satellite images display vegetation in red instead of green.