Seattle Police Union President Mike Solan said on Twitter that both left-wing and right-wing activists were "responsible" for the pro-Trump siege. 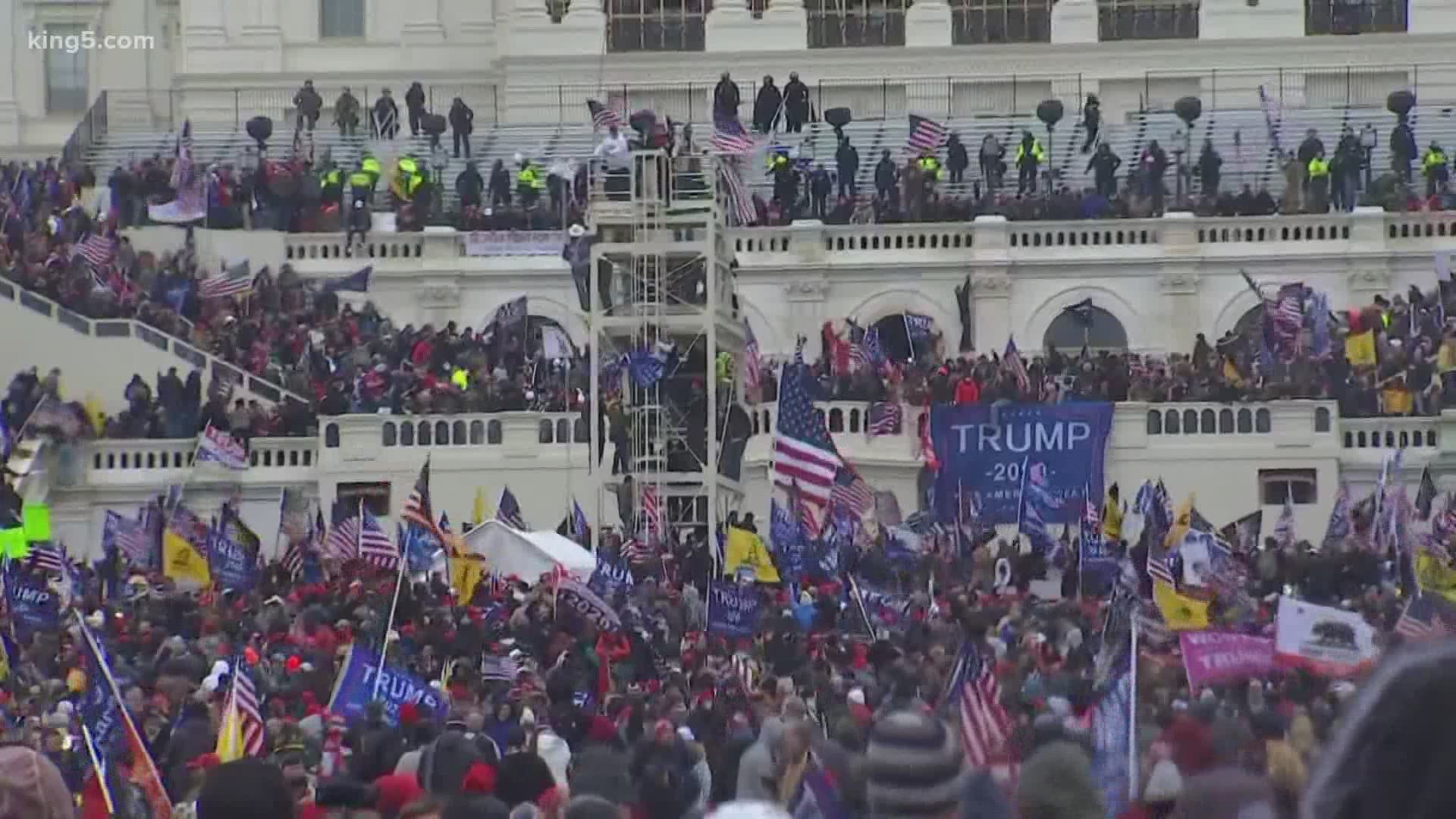 SEATTLE — Seattle Mayor Jenny Durkan, former Police Chief Carmen Best and others criticized the president of the Seattle Police Officers Guild for comments he made on Twitter regarding the U.S. Capitol riots.

Mike Solan's tweets implied that both right-wing and left-wing activists were at fault in last week's Trump supporter siege of the U.S. Capitol.

He shared a tweet from a conservative blogger on Friday that singled out the arrest of a Black Lives Matter activist, who said he was videotaping Trump supporters who disrupted the certification of the Electoral College.

Solan's tweets were sent the same day that a national reporter broke the news that two Seattle Police officers were at the siege on the Capitol. Interim Police Chief Adrian Diaz said that two officers were on leave and were being investigated.

RELATED: 2 Seattle officers on leave after reports they were in DC during US Capitol riots Wednesday

When other Twitter users responded negatively, Solan doubled down.

"Far right and far left are responsible for that sad day," he posted.

#American #cops caught in the “middle” between factions vying for #political control. Reminds me of our friends @PoliceServiceNI👇.Our present/future?

As #MSM tells us who to blame for yesterday’s #troubles, @MrAndyNgo continues to be reliable.#HOLDTHELINE!🇺🇸 https://t.co/yk0vWdL8ds pic.twitter.com/CsnsKEkVjY

Solan was called out by Scott Lindsay, a former city attorney candidate who had written a high-profile report criticizing the city's level of crime.

There can be no equivocation about who was responsible for the attack on the Capitol - my former workplace. You are deliberately spreading disinformation. Seattle needs a SPOG president who can be a credible voice on the future of policing here. You've forfeited that trust.

Wholly agree with Scott Lindsay! BLM was not the cause of yesterday’s insurrection. We have to tell the truth. https://t.co/UrmnNQDAJe

Over the weekend, Seattle Mayor Jenny Durkan called Solan's statements "wrong, immoral, and a lie," in a statement:

"The SPOG President’s statement is wrong, immoral, and a lie. The violent and seditious actions we all witnessed were done by anti-government mobs, inspired and directed by President Trump and his legion of enablers. His statements do a huge disservice to the hundreds of police officers who work daily to serve the public and the rule of law, believe in equality, and were disgusted by Wednesday’s events.

"His statements do not reflect the values of the City of Seattle but instead echo the failed lies of a failed presidency. In fact, every officer at the Seattle Police Department has an obligation to not “post speech that negatively impacts the Department’s ability to serve the public.”

"As we expect this incident to be investigated by OPA, Solan should retract his statements and apologize or resign."

Black Lives Matter Seattle-King County also called for Solan's resignation Sunday night. The organization also demanded that Diaz fire the two officers who allegedly were in D.C. during the riots.

"Guild President Solan is incapable and unwilling to do the work that needs to be done to dismantle racism in the union," BLM Seattle said in a prepared statement. "His leadership perpetuates the problem rather than addressing it. He must resign."

The Seattle Office of Police Accountability also confirmed it has opened a preliminary investigation into Solan's tweets.

Solan did not respond to requests for comment about his tweets from KING 5.