The couple was married for 63 years and died within days of each. 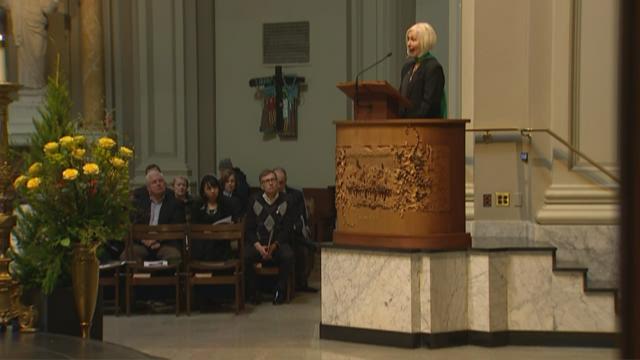 People from across Washington gathered at St. James Cathedral on Monday to remember the lives of former Governor John Spellman and his wife, Lois. The couple was married for 63 years and died within days of each other.

“They took enormous pride and dedication to family life, that came first. Of course, they were religious and believed deeply in God and had faith in the future being better for everyone,” former State Commerce Director Richard Schrock said. “They wanted to share future prosperity with everyone.”

"He was a true statesman; he was a visionary leader," Steve Excell, who served as Governor Spellman's chief of staff, said.

Spellman was a Navy veteran and also served on the King County Commission before becoming executive.

As King County executive, Spellman helped secure the construction of the Kingdome, paving the way for the Seahawks and the Mariners.

Condolences from area leaders poured out for Spellman's family after his death was made public.

Secretary of State Kim Wyman released a statement saying she is “saddened” to hear of Spellman’s death.

“John was a true statesman and a deeply spiritual man who promoted racial equality and environmentalism, and persevered at every turn to build the Kingdome,” Wyman said.

"He led our state during a difficult financial time in the early 1980s and left his mark by working to strengthen local governments," Nelson said. "He also recognized early on that the state had an important role to play in protecting the environment and the open spaces in our unique corner of the world."

Former Governor Christine Gregoire said Spellman served as a mentor to her, especially when she was leading Washington state through a recession in 2008.

"I asked John for his insights and he generously offered them," Gregoire said in a statement. "We may have been from different parties, but we shared a common love for the great state of Washington, its environment and its people."

"John was a public servant who loved our community," Durkan said in a statement. "He could disagree with folks, but brought civility to our politics, and valued and embraced bipartisanship – something all too rare today."

At the time of Governor Spellman’s passing his family released the following statement:

"Today we bid a sad goodbye to our dear father John Spellman. The community he so loved is a better place from his efforts and sacrifices. His quick wit, an occasional smoke ring from his pipe and humming a few bars will be among lasting images of our dad.

With a reel and rod in hand, the waters of the Northwest brought him great joy. Protecting the beauty of our area made him stand against a proposed oil pipeline through the waters he loved and to protect King County’s open space and farmlands.

Our mother Lois was his true partner. With her Labor Relations focus from Seattle University, she was quick lend to her opinions. She was the catalyst. The day before he died, our parents were reunited for one last prayer.

From his days at Seattle Prep and Seattle University and Georgetown Law School, the Jesuits style of discernment played an essential role in John’s life. He was always able to pause and look at the other side of an issue. He was able to weigh the options. He was fair and just. He was able to work towards common goals and to humbly change his mind.

Our dad was ever present in our family. Even with meetings and travel he found time to be very present in the lives of his six children and grandchildren. Gathering around the table for Sunday dinners was a time to talk and celebrate our family while energizing for the coming week.

Music was a big part of his life. Jazz rolled through our house. Until the end, he was quick to hum a song or find a lyric that was appropriate to the moment. A hobby of his was to make mix tapes based around a specific session musician. It was this same type of attention to the details that he brought to his public service."

- Shoring up the social safety net during hard economic times.

- Teaming to build the Kingdome and bring professional sports to Seattle.